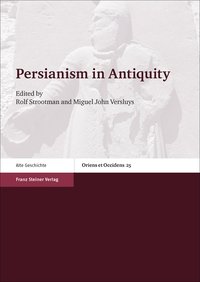 This volume offers a selection of articles presenting the history of one of the most disputed issues in historical studies related to Antiquity, namely the impact and reception of Iranian civilization. This topic is enjoying a resurgence in scholarly interest. In the comprehensive introductory chapter R. Strootman and M.J. Versluys define "Persianism" as the "ideas and associations revolving around Persia and appropriated in specific contexts for specific (socio-cultural or political) reasons" (9). They introduce another term, "Persianization", which refers to direct Achaemenid cultural and political influence. A third term, "Iranism", deals with the idea of Iran and a concept of Greater Iran in the Sasanian age (10).

In the article "Being Iranian in Antiquity", A. de Jong seeks to establish a framework for Iranian identity. De Jong stresses that religion and lineage were "the only possible rallying points for the maintenance of a Persian identity." De Jong rightly criticizes F. Millar's theory of an "historical amnesia" in the Hellenistic Near East, in which the native peoples of the Orient are devoid of cultural activity (42). [1]

M.C. Miller devotes her attention to the reception of Persian culture in Athens ("Quoting 'Persia' in Athens"). The author uses the term Perserie ("intransitive Persianization"). In this approach, the Odeion of Perikles, which was modelled on a Persian prototype, is "an instance of perserie rather than Persianism." L. Llewellyn-Jones elucidates the motif of the Persian court in Greek art ("'Open Sesame!' Orientalist Fantasy and the Persian Court in Greek Art"). He states that some art works may draw on genuine Achaemenid visual motifs, but they feature a Hellenic flavour, a combination which comes as no surprise.

Three further studies are devoted to the reception of ancient Iranian culture in the modern period, namely in Iran itself and in the philosophy of O. Spengler. O. Coloru explores the issue of how ancient Achaemenid and Sasanian sites were perceived in modern Iran under the Safavids and Qajars ("Once were Persians: The Perception of Pre-Islamic Monuments in Iran from the 16th to the 19th Century"). Judith Lerner rightly underscores that the glorious past was used by the Qajars in their efforts to oppose the British, French and Russian attempts at Iran's independence ("Ancient Persianisms in Nineteenth-Century Iran"). David Engels devotes his study ("Is there a "Persian High Culture?") to the image of Iran in Spengler's philosophy of history. [2] One of Spengler's mistaken ideas is the inclusion of Iran into the construct of "Arabian" culture.

Part II of the book is devoted to the Hellenistic world and is comprised of six chapters. D. Agut-Labordere ("Persianism through Persianization") discusses the issue of Egyptian cultural memory which included the memory of the Assyrian plundering of temples and the sacrileges committed by Xerxes in Egypt. S. Plischke elucidates the royal title "Great King" in the Seleukid empire as an instance of Persianism ("Persianism under the early Seleukid Kings?"). She briefly refers to Alexander's policies towards the Achaemenid heritage. [3]

R. Strootman addresses "Imperial Persianism: Seleukids, Arsakids and Fratarakā". The author is convincing in his vision of the Iranians in the Seleukid Empire as a pivotal factor. In his Parthian section, Strootman's arguments are not so persuasive. It is difficult to follow the view that the early Parthian kings "identified themselves as vassals under Seleukid suzerainty" (178). Strootman claims that Seleukos II defeated Arsakes I and granted him the title of King (basileus) (183-187). He fails to explain why Arsakes I and Arsakes II did not use the "granted" title of King on coins. Furthermore, he assumes that the Arsakids "depicted themselves as autonomous governor-kings under imperial tutelage. They did so by combining the title of basileus with the image of the kyrbasia, the soft governor's cap made of felt or leather." Here objections should be raised. The cap known as kyrbasia is not "the governor's cap". In the post-Achaemenid period, the kyrbasia was, alongside the diadem, an attribute of rulers; some of them were acknowledged independent rulers/kings like Ariaramnes and Ariarathes III in Kappadokia. [4] Thus, it is a mistake to identify the "satrapal tiara/kyrbasia" with "satrapal" political status. [5]

M. Canepa elucidates "Rival Images of Iranian Kingship and Persian Identity in Post-Achaemenid Western Asia". He devotes some attention to the so-called kyrbasia and rejects the term "bashlik" which is widely used, to denote this ancient Persian headgear (207, n. 17). Canepa ascribes its use to "Soviet scholarship" and "those following it", pointing to my papers and studies by Peck and Curtis. While attention is devoted to the alleged Soviet connections, a deeper discussion on the tiaras and the diadem as royal attributes is missing. Instead, some a priori statements are offered. The term "bashlik" has been used by dozens of western scholars beginning in the 19th century (cf. T. Reinach et al., "Bulletin archéologique", Revue des Études Grecques, tome 4, fascicule 14, 1891, 189-193). Canepa assesses the diadem as a Macedonian attribute of power (208f.): "Alexander's diadem introduced a new insigne along with his new royal image". In fact, the royal diadem of Alexander was a Persian attribute of power emulated by the King from Macedonia. [6] Canepa rejects views of "any supposed deep-seated Arsakid 'nomadic heritage,'" (209, n. 26). Contrary to this however, the "nomadic origins" of the Arsakids are an issue repeated in all of the related major source traditions.

Ch. Lerouge-Cohen turns her attention to "Persianism in the Kingdom of Pontic Kappadokia" She devotes some space to the story of the Seven Persian nobles - conspirators who became part of the genealogical schemes in Pontos, Kappadokia, and Armenia. In his erudite article "Tradition oder Fiktion? Die "persischen" Elemente in den Ausstattungsprogrammen Antiochos' I. von Kommagene", B. Jacobs examines the royal imagery of Antiochos I. In the case of clothing, it can be seen that the Kommagenian imagery largely corresponds to what we can gather from the preserved antique tradition. B. Eckhardt addresses Hasmonean Judaea ("Memories of Persian Rule: Constructing History and Ideology in Hasmonean Judea"). A post-script is devoted to Herod, dubbed the "Great" although no source offers this title.

Eight articles make up Part III of the book, devoted to "Roman and Sasanian Perspectives". The article by V. Sergueenkova and F. Rojas, "Persia on their Minds" examines the uses of the Persian past in Roman Anatolia. R. Gordon turns to the Cult of Mithras and its origins ("Persae in spelaeis solem colunt"). E. Almagor examines Persianism in the Greek literature of the Imperial Age ("The Empire brought back: Persianism in Imperial Greek Literature"). A similar "literary" topic, but one concerning Ammianus, is addressed by M. Sommer in the chapter "The Eternal Persian: Persianism in Ammianus Marcellinus". Parthia and Persianism are the subject of the article by R. Fowler ("Cyrus to Arsakes, Ezra to Izates: Parthia and Persianism in Josephus"). Josephus offers instances of a connection between Jewish politics and the Persian past.

J. Wiesehöfer elucidates "Erān ud Anerān: Sasanian Patterns of Worldview". The author notices Persian influence on the Roman art under Galerius (monument in Thessalonica). He explains the late Sasanian origin of the epic Iranian concept of power rivalry and the image of an eternal enmity between Iran, Rum, and Turan. T. Daryaee examines "The Idea of the Sacred Land of Erānsahr". He assumes that the Achaemenid Empire provided a framework for imperial propaganda dealing with a territory claimed by the Sasanians. M. R. Shayegan turns to "Persianism: Or Achaemenid Reminiscences in the Iranian and Iranicate World(s) of Antiquity". He addresses tangible paradigms of Persianism, including examples exhibiting how the Achaemenids were referred to for genealogical and ideological constructions.

By and large, this impressive volume offers a thought-provoking assemblage of ideas. The cumulative effect is an intriguing representation of Persian/Iranian phenomena and their reception or appropriation, past and present, and an insightful exercise in the way we approach these phenomena in current scholarship. [7]

[2] When discussing Spengler's work, it is recommended to consider Feliks Koneczny's book On the Plurality of Civilizations, London 1962.

[7] A recent comprehensive book by Peter Panitschek should be added to these reflections: Die Seleukiden als Erben des Achämenidenreiches, Frankfurt am Main 2016.