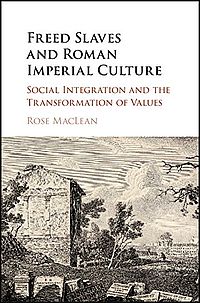 Rose MacLean has produced a thought-provoking monograph on freedpersons and their influence upon aristocratic Roman culture during the Principate. Against the backdrop of an increasingly autocratic world that limited traditional pathways to illustriousness and renown, she explores how authors and commemorators used the figure of the ex-slave and elements of "freed culture" to illustrate one's place and legacy within society. MacLean uses the term "freed culture" as a "shorthand for a collection of strategies through which ex-slaves negotiated their place in society" (15-16), drawing evidence from freedmen's inscribed monuments.

MacLean argues that elite Romans appropriated commemorative strategies from freed slaves to define their personal successes and their relationship with the princeps. This is especially significant because it reveals that cultural exchange between individuals of differing statuses within Roman society was not simply a trickle-down of aristocratic values, but rather a more robust sharing between different constituents. Throughout her analysis, MacLean is quick to admit that freedpersons were not the only inspiration or source behind changing patterns in elite commemoration; rather she wants to call attention to one facet of a broad and complex process that has not been fully appreciated by modern scholars.

The first chapter discusses the multiple dimensions of freed commemorative practices, smoothly weaving together the various subjects and themes emphasized by previous scholars, including civic status, occupation, family, and relationship with one's patron. Central to her assessment of freedpersons' epigraphic strategies is a thorough reexamination of the Tomb of the Baker Eurysaces. It is here that MacLean highlights what she believes to be a core characteristic of freed culture: the reformation of qualities such as obedience, industry, and honesty as "marks of honor, rather than as marks of servility" (11). Furthermore, MacLean sees this to be a primary locus of elite appropriation.

MacLean provides an extended analysis of this refashioning in the second chapter, which explores the practice linking traditionally servile qualities and lasting glory in funerary inscriptions. Focusing on a small set of thirty-five epitaphs honoring freedmen that contain the word fama, she suggests that commemorators constructed an explanation for merit and distinction that drew upon labor, deference, and gratitude, all qualities of unique significance for ex-slaves. She finds parallels within the memorialization of elite Romans during the Principate, most notably Tacitus's celebration of Agricola as a man of diligence and vigor combined with obedience (obsequium) and humility (57). As a coda of sorts, MacLean ends the chapter by tracing a similar connection between service, hard work, and spiritual immortality in Pauline Christian theology. Altogether, this chapter provides a fascinating look at the growing association between "servile" traits and the idea of "eternal life" in the first century CE.

Chapter 3 delves deeper into elite writers' engagement with - and appropriation of - freed culture, especially within the new political discourse of the Principate. Here, MacLean attempts to forge a link between the practice of authors employing - and urging readers to identify with - enslaved or formerly enslaved individuals, and the strategies actively employed by freedmen to explain their place in the Roman community. Of particular note is her analysis of several passages from the Satyrica, where she persuasively demonstrates how the parody of Petronius requires a considerable awareness of freed culture. Then, using a series of case studies from Horace, Seneca, and Phaedrus, MacLean highlights how authors used the figure of the freedman as a model for helping readers to engage with new ideas about power, success, and virtue.

In Chapter 4, MacLean examines the familia Caesaris, which she perceives as playing a critical role in the dialogue between aristocratic and freed cultures. She sees the rise of powerful and wealthy imperial freedmen as both a byproduct and a symbol of the increasing autocracy of Rome. Accordingly, the memorialization of these individuals created a unique challenge: "how to represent their connection to the princeps, who was at once their personal patron and ruler of the Roman world" (106). Looking at both positive and negative representations of imperial freedmen, MacLean argues that these former slaves served as models for aristocratic behavior not only for their ability to gain prominence from loyal service to the emperor, but also for publicly celebrating the "servile" virtues that defined their relationship with their patron / ruler.

MacLean begins the final chapter by examining how freedmen emphasized continuity and change in their life narratives, including civic status, family roles, occupation, professional connections, birthdays, and votive offerings. MacLean does a good job underscoring that manumission, while unarguably an exceptionally important moment in a freedperson's life, was not the only focal point structuring the commemorative biographies of former slaves; freedpersons often "appealed to friends and family, cult, occupation, or the Roman calendar to define their lives as coherent wholes" (168). MacLean maintains that these "alternative frameworks" proved appealing to some aristocratic authors, who were increasingly coming to view traditional biographical markers such as illustrious ancestry or the acquisition of political offices to be lacking in substance. In particular, MacLean sees early-imperial Stoic and Christian thinkers drawing upon freed narratives as a rhetorical form for characterizing ethical and spiritual progress.

Freed Slaves and Roman Imperial Culture is a creative and erudite study of the cultural sharing between freedpersons and aristocrats in the Roman world that is sure to provoke further reflection and discussion among readers. As scholars, we often consider slaves and freedpersons in semi-isolation, focusing on their unique lives and experiences; this book serves as a reminder that they were also active participants in the wider civic community. MacLean challenges her readers to consider how members of this wider community engaged with an expanding freed culture, and appropriated ideas and models for their own purposes. This book will certainly be of use not only to those scholars interested in the experiences of slaves and freedpersons, but also those interested more broadly in the intellectual culture and discourse of the early imperial era.