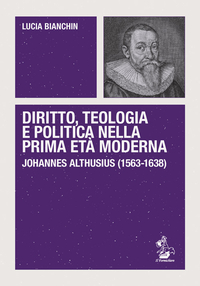 The studies on the German Calvinist jurist and political philosopher Johannes Althusius (1557-1638) have known in the last decades a significant revival. Thanks also to the impulse of the Johannes-Althusius-Gesellschaft, founded in 1959, a growing attention has been devoted to his federalist and anti-absolutist ideas not only in the German-Swiss and in the Dutch areas, but also in the Anglo-Saxon world, in France and in other European countries. In Italy such an interest dates back at least as far as 1943, when, at the time of anti-fascist Resistance, Otto von Gierke's classic monography on Johannes Althusius und die Entwicklung der naturrechtlichen Staatstheorie (1879) was translated. [1] Later on, Italian scholars contributed to point out the importance of Althusius as a transitional figure from medieval corporatism to modern federalism and consociational democracy, and deepened the understanding of specific aspects of his theological and political thought. In 2009, the critical edition and Italian translation of Althusius' main work, the Politica methodice digesta (1603-14), marked an important milestone in this process. [2]

Lucia Bianchini, who is Associate Professor at the University of Trento, has contributed to the development of Althusian studies with several articles and essays, the most important of which are now gathered in this volume. [3] In addition to the short Preface by Diego Quaglioni and the Premessa by the author, the book is laid out in five chapters and ends with a useful bibliography of sources and secondary literature.

The first chapter (Sovranità e diritto regale, 19-48) provides an overview on Althusius' idea of sovereignity as it is expressed in the Politica, a treatise that has been commonly considered in opposition to Jean Bodin's Les six livres de la Rèpublique (1576) and their theory of absolute and undivided sovereignity. In accordance with the studies of K.W. Dahm, Th.O. Hüglin, W. Krawietz and C. Zwierlein, Bianchin argues that one of the main differences between Bodin and Althusius lies in the latter's tendency to depersonalise power, that is to say, "to decompose" sovereignity through the distinction between the "abstract ownership (titolarità) of the right, which is acknowledged to the social body, and the concrete exercise of power, which is up to the sovereign (principe)" (22). According to Althusius's view, the jus populi is an original, unalienable and perpetual right, whilst the jus regis derives from a covenant or contract of mandate, which is personal, limited and, in case of tyranny, revocable by the subjects through the controlling power of the intermediate magistrates or Ephors. Such a position recalls the reflection on the biblical foundational passages on regal law (1 Sam. 8, 11-18; Deut. 17, 14-20) developed by the late-medieval Glossatores, then reworked by the School of Orléans and, later on, by Calvinist theologians and political jurists.

In Chapter 2 (Il problema delle leggi nella Respublica Christiana riformata: Calvino, Daneau, Althusius, 49-76) Bianchin expands upon this topic, underlining the influence of Calvinist moral theology and political theory on Althusius. Along with John Calvin, François Hotman, Hugo Donellus and the anonymous author of the Vindiciae contra tyrannos, she refers more specifically to Lambert Daneau, whose Politices Christianae libri septem (Geneva 1596) served for Althusius as a fundamental benchmark. As a matter of fact, Althusius borrowed from Daneau (and therefore from Calvin) several concepts, quotations, exempla and argumentations. One of the most relevant is the idea of a lex fundamentalis regni, which sets the conditions that apply for the commitment of the government to the Summus Magistratus and produces, in this way, a mutua obligation between the magistrate and the community or consociatio.

Chapter 3 (Giustizia e censura in Althusius, 77-111) insists on the importance of Calvinist tradition in the Althusian conception of civil government. On the base of the Psalms 82 and 101, Althusius argues that the king's loyalty to the law reflects his loyalty to God, thus condemning the abuse of justice and reaffirming the subjugation of the rulers, "judges of men", to God, "judge of the judges" (90). In other words, clarifies the author, Althusius opposes to the voluntarist idea of justice stemming from the Bodinian conception of sovereignty the scriptural model "of a king who is responsible for his errors" (93).

The influence of Calvinism emerges also in the examination of the Althusian idea of censorship. The chapter of the Politica devoted to this topic underwent several changes in the passage from the first to the third edition of the treatise, which reflects the author's experience of active participation in the political life of Emden. In the Althusian design the institution of censorship, recovered from the Roman judicial system and proposed again in the early modern period by Bodin and Justus Lipsius, "meets the rigorous Calvinist model of discipline, and gets a new extension and incisiveness" (95). For this reason, as M. Behnen and J. Becker have argued, censorship is described in the Politica not only as an important tool for the preservation of the public order, but also as a very form of civil administration: in this way, states Bianchin, Althusius de facto boosted the power of intervention of the State in the field of morality and discipline, undermining the traditional ecclesiastic jurisdiction on it.

Chapter 4 (Bellum iustum e bellum civile nella dottrina althusiana dello Stato, 113-37) deals with a topic which has received increasing attention in German historiography, summarising Althusius' position on the basis of the fragmentary treatment devoted to it in the Politica. Also in relation to the issue of the bellum iustum, Althusius re-elaborates the argumentations of scholastic theology already reworked by Daneau, Lipsius and other contemporary Calvinist writers; at the same time, he discusses and quotes a number of different sources, ranging from Plato, Livius, Tacitus and Vegetius to Francesco Patrizi, Gregor Richter, Jean Bodin, Giovanni Botero and Scipione Gentili. From the latter, argues Bianchin, Althusius probably borrowed the principle of the authorization of the legal supreme authority, that is to say, in the case of the German area, the Emperor of the Holy Roman Empire.

Finally, Chapter 5 (Coscienza e diritto pubblico nell'età della riforma, 139-66) recalls the studies of Christoph Strohm in order to show the consonance between Althusius' and Daneau's theologically-based political theories. Then it proposes a comparison between Althusius, Bodin and Christoph Besold, the German Catholic convert who is considered one of the first supporters of the individual natural right of freedom of conscience (see the recent studies by R. von Friedeburg). In spite of the confessional differences among the three, some general affinities ("comune sentire") can be observed, which "lead to relatively homogeneous results in the field of Public Law" (166). Such an outcome, concludes Bianchin, was due to the common goal of religious pacification, which required the concession - at least partially - of freedom of conscience, from this point forward seen as one of the fundamental limits to the State's positive law.