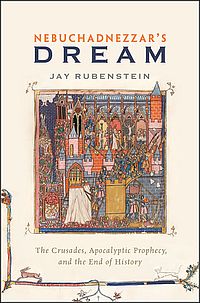 For many decades, crusade historians were reluctant to highlight the influence of apocalyptic conceptions or prophecy on crusading's origins or development. In response to renewed interest in eschatology and apocalypticism at the turn of this millennium and the rekindling of religious violence, that attitude has changed radically. In Nebuchadnezzar's Dream, Jay Rubenstein extends the work he began in Armies of Heaven to argue that the first and subsequent crusades were consistently perceived and presented in biblical, prophetic, and apocalyptic terms. However, this apocalyptic presentation of crusading would be seriously challenged by evidence of crusaders' fallibility, the spectacular failure of several campaigns, and the evolution of apocalyptic thought towards depicting the End Times' struggles as occurring within Latin Christendom rather than between Latin Christians and Muslims.

Perhaps somewhat controversially (given the lively Beatus Apocalypse commentary tradition), Rubenstein claims that initially John's Apocalypse exerted relatively little influence on twelfth-century prophetic discourse. While languishing in Saracen captivity, Bohemond of Antioch supposedly turned to the book of Daniel's visions to identify the first crusaders as the uncut stone which crushed the statue and grew to fill the entire world. However, was this attribution truly Bohemond's or was it Bruno of Segni's? On Bohemond's release, both men embarked on a preaching tour to drum up support for a new crusade, prompting Guibert of Nogent, Baldric of Bourgueil, and Robert the Monk to write histories of the First Crusade highlighting Bohemond's exploits. The eternally self-aggrandizing Bohemond was hailed by some as a potential world ruler, prophet, and apocalyptic agent, despite his desertion of the First Crusade and inglorious defeat by the Greek emperor Alexius.

Bohemond's tour also inspired Lambert of Saint-Omer to write the Liber floridus, an encyclopedic compendium incorporating Fulcher of Chartres' history of the First Crusade. From Augustine and Orosius, Lambert borrowed the concept of translatio imperii (transferral of empires) from East to West and the juxtaposition of Rome and/or Jerusalem (the spiritual city of God) with Babylon (the Antichrist's worldly dominion). In what became a long-lived tradition, chronicles of the First Crusade were also bound with Pseudo-Methodius' Revelations and Adso of Montier-en-Der's Life of the Antichrist. The figure of the Last World Emperor was used to justify the translation of empires and foretell the defeat of Islam. Adso substituted a Frankish for a Greek emperor, who would reconquer Jerusalem and lay down his crown there. Lambert in turn revised Adso; the world emperor would come to Jerusalem to claim the Christian empire as Godfrey of Bouillon had done by accepting the title of king of Jerusalem (although Godfrey crucially refused the crown).

Lambert's retroactive tailoring of prophecy to fit the First Crusade and his apocalyptic presentation of it was on trend. Guibert of Nogent claimed Urban II referenced the crusaders' role in establishing conditions essential for the End Times (a Christian kingdom in the East). Robert the Monk stressed the crusaders' Frankishness (thereby connecting them to Charlemagne's translatio imperii); Ekkehard of Aura reported the viciously anti-Semitic crusader Emicho of Flonheim's claims to be the Last World Emperor. What is perhaps missing from this discussion is an examination of how Pseudo-Methodius, as a Syriac and then a Greek and Latin text, established a prophetic lingua franca about the role of Islam and empire in the End Times, but also supported competing claims for eschatological agency and imperial inheritance stemming from rivalries between crusaders and between Latin and eastern Christians. However, Rubenstein does note that Lambert's inclusion of Alexander, Arthur, and the Trojan war would have enabled readers to situate the crusade within the context of other prophecies and eschatological histories: certainly later compilations freely mixed histories of the crusade with prophecies and materials on Charlemagne, Arthur, Troy, and Alexander.

The apocalyptic construction of the First Crusade, however, was seriously challenged by sceptics such as William of Malmesbury and those encountering "stories of lives ruined or ideals betrayed" (67). Urban II's nebulous references to holy war, martyrdom, and remission of sins through armed pilgrimage inspired crusaders, but questions persisted regarding the precise conduct and service necessary to achieve forgiveness of sins. Chroniclers therefore stressed the crusaders' heroism, despite the notoriously criminal recidivism of some such as Thomas of Marle. Fresh doubts were spawned by desertions, the disastrous campaigns of 1101 and 1107, and suspicions that crusaders and Latin settlers alike had "gone native" and lost their original purity of purpose (such was the conclusion of Jacques de Vitry writing a century later, relying on the disillusioned Fulcher of Chartres and William of Tyre).

Shared prophetic language and vicious anti-Semitism would also characterize the Second Crusade. Royal and papal promotion of this crusade was catalyzed by the fall of Armenian Edessa, and one of the most famous prophecies associated with it may have been circulated by Armenians seeking to recruit western assistance. In sharp contrast, apocalyptic association of the Jews with Muslims (and Antichrist) may have contributed to outbreaks of anti-Jewish violence. Crusade recruiters Bernard of Clairvaux and the anti-Jewish Cistercian Ralph famously clashed over how the Jews were to be treated, and Rubenstein painstakingly reconstructs Bernard's eschatology from his sermons on the Song of Songs. Bernard's goal of the extirpation or conversion of all Muslims and pagans appears to have been influenced by the Tiburtine Sibyl, while numerous miracles (intended to validate the crusade's message) accompanied Bernard's recruiting tours. How then to explain the crusade's failure? Bernard wrestled with this question in his De consideratione, a work that later deeply influenced Innocent III and the Parisian reformers he appointed as crusade promoters. Bernard concluded that failure was due to the crusaders' sins, yet westerners must continue to defend the Holy Land. Doubts nonetheless lingered regarding the salvation of the crusade's promoters and participants; Geoffrey of Auxerre's hagiographic life of Bernard therefore minimized his role in the crusade and mentions of it and apocalypticism were expunged from Bernard's official letter collection.

Otto of Freising likewise wrestled with how to situate the failure of the Second Crusade within world history. He settled on the translatio imperii from Babylon to Rome, typified by the reign of Charlemagne as Augustus' heir. In The Two Cities, Otto saw the uncut stone, however, as the Gregorian reforms which had destroyed "Roman" (German) authority. Nonetheless, encouraging news presented itself in the form of (Armenian) rumors of an eastern Christian king Prester John, who would help western crusaders, perhaps led by Conrad of Germany, defeat Islam. Rubenstein convincingly argues that Otto's theories of the Antichrist were drawn from the Liber floridus and that after the defeat of 1148, Otto excised both the Last World Emperor and the earthly Jerusalem from his work. In contrast, the monks of Tegernsee composed the ambivalent Play of the Antichrist, which depicted the unification of Christendom under a final world emperor who lays down his crown in Jerusalem. The play's Antichrist, accompanied by heresy and hypocrisy, then deposes the king of Jerusalem and declares a crusade against the king of Germany, whom he deceives through the very same miracles Bernard had used to recruit Conrad.

The papal crusade legate Henry de Marcy, in contrast, carefully differentiated Satan and Saladin, although Rubenstein omits Henry's elaborate allegorical discussion of Jerusalem and promotion of the anti-heretical crusade. He instead focuses on one of the best-known apocalyptic thinkers of the medieval period, Joachim of Fiore. Joachim substantially reworked his theories of history in response to the loss of Jerusalem and the True Cross, moving from a tradition which situated important events of the End Times in the West to an exposition of the Apocalypse where internal persecutors such as the German emperor were replaced by Islamic rulers (including Muhammad and Saladin), joined by the "Patarenes" associated with "Cathar" heretics. Joachim then later revised his views, in the wake of the Third Crusade, to focus on threats within Christendom, and stressed that Christians might well conquer Islam by preaching rather than fighting.

This tension between external and internal apocalyptic models would be resolved in later generations by merging the two. Firm proponents of prophecies circulated during the Fifth Crusade, Jacques de Vitry and Oliver of Paderborn claimed that Christendom faced a multi-front battle against false unreformed Christians, pagans, Saracens, schismatics, and heretics, and advocated triumph through fighting, reform, and preaching.

Moreover, as this important book shows, medieval apocalypticism's attempts to reconcile human agency with the linear progress of salvation history is a strategy still employed by modern mainstream and extremist religious and political groups. As Philippe Buc has demonstrated, holy war, martyrdom, reform, and purge have been conjoined in the West for over two millennia. What remains to be seen is if apocalyptic and prophetic thought might also serve as part of a diplomatic and religious discourse which unites fragmented groups and crosses cultures, informing identity, strategic actions, proselytization, and negotiations. [1]

[1] Mayte Green-Mercado: Visions of Deliverance: Moriscos and the Politics of Prophecy in the Early Modern Mediterranean, Ithaca 2019.