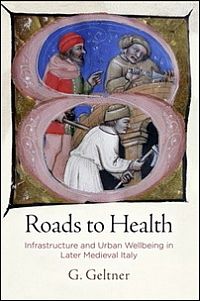 If one were to judge the advancement of our society and the state of our public health system based on the consequences of the ongoing SARS-CoV-2 pandemic, our societies would receive a rather bleak judgement. We would be quick to argue against the supposed injustice of such a judgement, appealing to various extenuating circumstances. Yet, we are less prone to invoke merciful judgment for other historical periods, blinded as we are by a certain positivistic and melioristic bias.

Indeed, few historical periods have suffered as bad a press as the Middle Ages, whose public health systems have been considered backwards, ineffective and, in the best of cases, merely prodromic to modern healthscaping practices. In his book Geltner tries to dismantle a deeply layered set of biases and historiographical topoi that have thickened around our notion of medieval public health. Geltner devotes a rather lengthy introduction (7-33) to contextualize the extant narrative on medieval health systems, its development as a backwater of the modern/pre-modern narrative and its ongoing fortune. One of the major myths still surviving in the main narrative is the watershed role of the Black Death. Geltner argues through an informed and convincing argumentation that the Black Death, though leaving a lasting mark in European sanitary history, was hardly a significant turning point for medieval hygienic and preventative systems.

Furthermore, he advocates for a less teleological view of pre-modern health practices and for the adoption of an emic view. Geltner invites the reader to widen his gaze in order to encompass a broader set of practices that have not been considered by health historians as part of public health and preventative systems. Aspects such as consumer market regulations, control over potential damages by artisanal production and efforts to secure road practicability can all be considered as part of a broader hygienic and preventative struggle of medieval polities. Geltner models his narration of medieval public health based on three main theoretical frameworks: biopolitics, healthscaping and agent network theory. While the use of such highly theoretical frameworks is neither new nor risk-free when it comes to pre-industrial societies, Geltner's careful use of primary sources provides a compelling justification. If one considers medieval medical theories (namely galenic and miasma theories) without a melioristic-positivistic narrative, it becomes clear that medieval polities, and civic administrations in particular, all deployed organized preventative systems.

The focus of the book is one of such preventative and public hygiene systems, namely road control, ubiquitous in the Italian peninsula since the 13th century, well before the supposed turning point of the Black Death. The Author tackles the subject both from a normative and an administrative standpoint. In the first chapter of the book (34-67) he reconstructs the history of road control efforts and analyses an extensive set of statutes by the civic administrations of the Italian peninsula in order to provide the reader with the general framework in which to set his three case studies. The road masters were, indeed, key officials in Italian Communes, as they connected public health efforts to population-level control of hygienic practices, crossing the ambiguous barrier between private and public sphere. Geltner highlights both successes and shortcomings of such officials that, as usual in the context of the Italian Commune, were at the centre of numerous power struggles. He also manages to give further validation to his own critique of the dominating public health narrative of the Middle Ages.

In chapters 2 to 4 (68-130) the Author takes his analysis of road masters and Italian medieval preventative experiences a step further. He uses three abundantly documented case studies to shed light over practices rather than norms on medieval healthscaping. Even though the norm-practice divide, as Geltner himself notes, has been widely reduced by recent research, these chapters clearly show how little one can reconstruct from statutes alone. The Author draws from his case studies of urban (Lucca, Bologna) and rural (Pinerolo) road masters to highlight the key role of these officials. In Geltner's reconstruction they were agents of power brokerage that linked and bridged the gap between budding centralizing polities and the population. The system as a whole benefitted from a certain degree of widespread consciousness of basic medical theory (miasma and foul sight/smell theories) and the road masters played a crucial role in translating episodic, population-level reports into somewhat coherent preventative public hygiene systems.

After having highlighted both the normative frame (chapter 1) and the administrative practices (chapters 2-4) of the road masters, in chapter 5 (131-165) the Author once again takes a step back from his case studies to focus on a wider picture. He starts by reconstructing the institutions that transferred Classic (Greek and Roman) medical theories to the Middle Ages. Civil and military architects, armies and monks are identified as the main agents that promoted and guaranteed the survival of Classic healthscaping practices well beyond the fall of the Western Roman Empire. Geltner then tries to offer a brief overview of healthscaping practices in Europe (England, Spain, Low Countries) and beyond (East Rome and Islamicate World). The picture he depicts breaks with a long-standing tradition of Italian and European-Christian exceptionalism as a wide array of preventative practices were adopted throughout the analysed areas.

Overall Geltner's book provides new and insightful views on medieval sanitary and preventative programs. The Author manages to successfully refute a biased melioristic narrative on medieval public health while contesting also, albeit briefly, a certain Eurocentric idea of the Middle Ages. Though the opening introduction is highly theoretical, Geltner manages to avoid the pitfall of over-theorization and develops his argumentation through strong sets of primary sources. Of the three theoretical frameworks he proposes (biopolitics, healthscaping and actor network theory), healthscaping is the one he develops most coherently and convincingly. By applying the label of healthscapes to the medieval world, the Author forces the reader - and the scholar - to shift his focus from reaction to prevention and harm-reduction practices. Such a paradigm shift will undoubtedly spur debate on medieval public health systems and, hopefully, highlight new actors of medieval preventative programs.