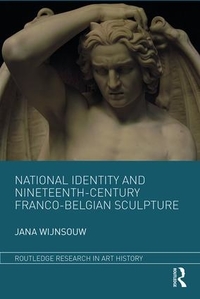 Jana Wijnsouw's National Identity and Nineteenth-Century Franco-Belgian Sculpture makes a seminal contribution to our understanding of both the complex issues surrounding national identity formation as well as to the scanty literature on nineteenth-century sculpture. As members of a new nation established in 1830 that consisted of two linguistic/religious groups - the French-speaking and mainly Roman Catholic Walloons in the south, whose main city was Brussels, and the Dutch-speaking, predominantly Protestant Flemings in the north, whose main city was Antwerp - Belgian nation builders and the cultural cadre they employed, had to negotiate the mine-laden terrain of completing regional and national identity politics. Nonetheless, this was a boom period for sculptors, just as the establishment of the Third Republic was for French sculptors later in the century.

This monograph rectifies a regrettable lacuna in the history of nineteenth-century sculpture by acquainting us with numerous unfamiliar sculptors working prior to the two big names in Belgian sculpture: Constantin Meunier and George Minne. It restores largely unknown yet key Belgian sculptors such as Guillaume and Joseph Geefs, Eugène Simonis, and Charles-Auguste Fraikin, to their proper places in history. In addition, it provides a lucid analysis of the exceedingly complex Belgian art world where political agendas, personal aspirations, and rivalries - individual, institutional, religious, linguistic, regional, and national - were in play in a manner that distinguished the Belgian artworld from all others during the long nineteenth century.

This well-organized and clearly written monograph is divided into four chronological sections - 1830-50, 1850-80, 1880-95, 1895-1916 - each organized further into four parts: Politics, Education, Exhibitions, and Public Commissions. Each part provides the essential context for understanding the subsequent ones, so that by the time one reads about public sculpture, one has a comprehensive view of the milieu in which these projects were realized: why particular sculptors were chosen for particular projects and what factors determined the choice of subject, placement, and design. The author includes one or more case studies in each of the sixteen sections that illuminate the most salient issues of both the theme and the epoch.

As the government of an independent Belgian formed and the duties of each ministry were specified, we learn that one of the chief duties of the Interior Minister was supervising the commemoration of "great men" by Belgian sculptors. This directive decisively determined the course of sculpture in Belgium and constituted an initiative that populated parks and squares during the course of the century and employed dozens of sculptors.

As part of its nation-building process, Belgium initiated an annual salon exhibition that rotated among Antwerp, Brussels, and Ghent, as well as a competition for fellowships that sent student winners abroad for further study. This incited regional rivalry between the older and more prestigious Antwerp Academy, which promoted the Baroque tradition of Peter Paul Rubens and whose students were initially the main winners, and the Brussels Academy, inspired by Italian Renaissance and Neoclassical traditions, and more closely allied with progressive trends in Paris as the century progressed, and whose students dominated beginning in 1869.

At the same time, generous funding for public projects drew foreign artists to the Belgian salons. The renowned French sculptor Jean-Baptiste Carpeaux found avid collectors in Belgium and the sculpture he displayed at the salons prompted stylistic imitation and a resurgence in the popularity of terra cotta sculpture in Belgium. The French Rococo-revival sculptor Ernest-Albert Carrier-Belleuse was even awarded the commission to embellish the Brussels Bourse (stock exchange), and commendably employed a team of Belgian sculptors to execute his designs, along with his French protégé, Auguste Rodin. For the most part, however, public commissions excluded foreign-born artists.

Wijnsouw engagingly describes the sculptural scene, fraught throughout the period with conflicts motivated by a range of factors - self-interest and jealousy, aesthetics and ideology, nationalism and internationalism. Foreign sculptors participated minimally in the Belgian Salon exhibitions, but beginning in the 1850s, Belgians exhibited in rapidly increasing numbers at the Paris Salon, a consequence of the French capital's dominance as the center of European art commerce.

The retrospective construction of a generic Belgian national identity produced some strange and fascinating results. The Mannerist sculptor Giambologna, whose career unfolded in Italy, was Flemish by birth and appropriated as part of a Belgian art history that predated the nation's founding.

The judicious inclusion of graphs provides helpful overviews. They chart, for instance, the number of public monuments inaugurated in Belgium and the number of Belgian artists participating in the salons in Belgium and Paris, thereby helping readers to correlate commissions with historical events. In the early years of the Kingdom of Belgium, few monuments were commissioned, but there were significant spikes in 1848, the year of populist revolutions throughout Europe, 1871, the end of the Franco-Prussian War, and 1899, the year before the grand 1900 Exposition universelle in Paris. The temporal terminus of 1916 for this study seemed like an odd choice until I learned of the important exhibition Belgian Art in Exile, held in London that year, in the midst of World War I. Many of the 23 sculptors and 61 painters spent the war years in London. The show's purpose was to showcase the 'national character' implicit in the work of Belgian artists at a moment when the tide was turning away from the celebration of national identity in art to the promotion of international modernism.

It would have made smoother reading had the quotes been in English like the rest of the text, with the original French texts accessible in endnotes. Nonetheless, this study is indispensable to gaining a holistic and nuanced understanding of European sculpture during the long nineteenth century.