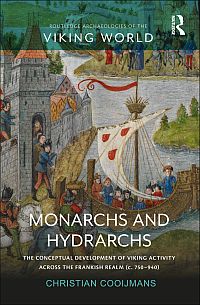 The vikings have been a topic of perennial - indeed, one could say permanent - interest in early medieval studies for decades. [1] They remain one of the primary reasons newcomers become interested in the field. Yet most - though by no means all - Anglophone studies of the vikings concentrate on their activity in the British Isles and North Atlantic. Monarchs and Hydrarchs, therefore, is a welcome publication, focussing as it does on the Frankish world. Another welcome aspect of the monograph is that, throughout, Cooijmans examines developments in both Scandinavia and Francia - rather than one or the other - and the impact these had on interactions between the two.

Cooijmans develops his conception of 'hydrarchy' from the term originally applied by Richard Braithwaite to contemporary maritime state structures in the seventeenth century. More immediately, he builds upon ideas set out by Peter Linebaugh and Marcus Rediker in their study of pirate activity during the early modern era [2], and previously utilized in the study of viking activity by Neil Price (among others). [3]

Monarchs and Hydrarchs is divided into eight chapters, the first of which is an introduction (1-15) and the last a short conclusion (233-236). Chapters 2 ('The Scandinavian Perspective', 17-56) and 3 ('Carolingian Francia', 57-86) provide the political and economic background to the Viking Age. While Cooijmans's purpose in his monograph is not to provide a narrative of this period, he nevertheless does an excellent job of summarizing the complex situations that prevailed in both Scandinavia and Francia from the mid-eighth to mid-tenth centuries.

The remaining chapters (4-7) develop Cooijmans's conceptual development model. Chapter 4 (87-98) explores the exchange of goods and knowledge in the earliest Franco-Scandinavian contacts. Chapter 5 (99-118) examines early hydrarchic activity. Chapter 6 (119-207), by far the longest, addresses the intensified activities of the mid-ninth to mid-tenth centuries. Finally, Chapter 7 (208-232) sets out the structure of the theoretical model and questions how far it applies to each of Cooijmans's three case-study areas: lower Rhine-Meuse-Scheldt basin; Seine basin; and Loire basin.

Cooijmans's conceptual development model consists of four chronological phases. Phase I, the pre-viking period (roughly up to the mid-eighth century), witnessed: the emergence of nodal markets and long-distance trade in Scandinavia; the consolidation of networks of central places and trade in moveable assets in Francia; and the entrenchment of an interregional trade network between the two, which, in addition to causing the flow of increasing amounts of Frankish wealth into Scandinavia, also saw the dissemination of knowledge about political and economic conditions in Francia.

This in turn facilitated Phase II in the late eighth to early ninth century: the consolidation of nodal markets and commercial centres in Scandinavia; limited viking activity focussing on peripheral, moveable wealth and fostering political relationships with Frankish monarchs; and initiation of coastal defences and tribute payments in Francia.

Phase III, the mid-ninth to early tenth century, saw these developments come to full fruition: the re-orientation of commercial nodes in Scandinavia towards alternative sources of wealth; expansion of hydrarchic power through appropriation of moveable wealth and encampment on coastlines and along rivers, as well as formal endowments on land on hydrarchs; and reduced political cohesion but greater implementation of counter-measures in Francia.

Finally, in Phase IV, the late ninth/early tenth century onwards, both Scandinavia and Francia experienced the abandonment of emporia as urban centres took on their economic role, and their political role too in the case of Scandinavia, while hydrarchic territories either dissolved or developed into formal polities.

Cooijmans's conceptual development model provides a solid basis for understanding viking activity, and not only in the Frankish world but also in the Insular world and Eastern Europe. Yet Cooijmans goes to great lengths to emphasize that there was great scope for individual action within the broad strokes of the model. Thus, the ultimate purpose and greatest strength of Monarchs and Hydrarchs is not to provide hard and fast rules, but rather to provide a framework within which to examine individual situations on a case-by-case basis. Hopefully future scholars will take such examinations further, whether applying the model to other areas or undertaking specific case studies.

One aspect of the book that could have been stronger is the Introduction. The conceptual development model is revealed as the book progresses. It might have been easier for the reader, however, if the model was laid out clearly from the start in order to give the reader a better idea of what to expect.

Similarly, although the Introduction includes a section titled 'Terminology and Definitions', the key term 'hydrarchy' - with which readers may not be familiar - is conspicuous by its absence. An excellent and comprehensive discussion and definition of 'hydrarchy' appears suddenly about a third of the way through the second chapter (31-34). While that section could have been used to expand on the contrasts and relationships between monarchs and hydrarchs, the definition itself ought to have been included in the introduction.

Ultimately, such criticisms do not detract from the importance of Cooijmans's contribution to the scholarship. Monarchs and Hydrarchs provides the field with a new way of examining and understanding viking activity. It is worth noting that, although this monograph is part of the Routledge Archaeologies of the Viking World series, Cooijmans draws upon both archaeological materials and literary sources, and does so effortlessly in a way to which all scholars of the early medieval period should aspire. Accompanied by excellent summaries of the context, and well-illustrated throughout with maps, genealogical tables and spatial representations of the model, the book will be especially useful to early career researchers, yet there is much here that more experienced scholars will also want to consider.

[1] I here follow Cooijmans's use of 'viking' uncapitalized to 'denot[e] a Scandinavian or concomitant mariner engaged in any overseas combination of incursionary, mercantile, or political endeavour for personal or collective sociomaterial advancement, active between the mid-eighth and mid-eleventh centuries' (11).