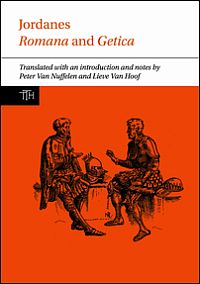 This impressive book has been a desideratum for many years and it constitutes a valuable tool for research. Only a few scholars could have produced such an opus without making an injustice to the vast literature on the subject, to the complexity of the Quellenforschung, and to the discussion of the many philological issues and the labyrinth of questions that surrounds these texts. Jordanes's work is fundamental for the history of the Late Antiquity, including the study of lost sources, the traditions on the origins of the Goths, the political and military history of the Goths, the ethnography of the gentes, the modern debate on the ethnogenesis, and the history of the Roman-barbarian states.

This book appears together with two other powerful tools by the same authors, respectively: the Clavis Historicorum Antiquitatis Posterioris. An Inventory of Late Antique Historiography (A.D. 300-800), Turnhout 2020; and The Fragmentary Latin Histories of Late Antiquity (AD 300-620). Edition, Translation and Commentary, Cambridge 2020 (FHistLA). The latter included the study of the fragments of Symmachus and Cassiodorus, both sources of Jordanes - therefore, it is often referenced in this volume.

The authors introduce each source with an exhaustive and comprehensive status quaestionis. The translations of the Getica and the Romana are accurate, elegant, and fresh. They are complemented with a total of more than 1,500 footnotes, which address the sources used by Jordanes and the historical and philological questions behind the text.

The introduction to Jordanes addresses the most important themes: his disputed identity and his social status, the dates and the immediate cultural and political contexts of his works (551/2), his views of the Goths, and his perspective on the religious disputes in Justinian's Constantinople (2-19).

The authors discuss the main questions raised especially from the Getica: e.g. the migrations, the Ostrogoths and Visigoths, the dynasty of the Amals (31-64). They dedicate a substantial part of the introduction to the sources of the Romana and the Getica, which - in the footsteps of Mommsen - they classify as directly or indirectly used by Jordanes (65-99). The analysis is detailed and meticulous, even if in my opinion they embrace some positions that are hard to support. This is the case, for example, of the use of the Getica by Jordanes as the source of Rom. 281, therefore the possibility Get. 281 was "the point that Jordanes had reached when he interrupted his composition of the Romana to work on the Getica" (cf. Get. 1; cf. p. 10, p. 183 n. 492). [4] I find it unlikely that the Symmachus excerpt in the Getica derives from the lost History of the Goths by Cassiodorus, as the authors suggest at p. 88-89 and 97 (cf. FHistLA, 146-153). [5] Within the structure of the Getica, the Symmachus fragment represents a long and substantial digression from the main narrative. Jordanes claims to have included Symmachus quatenus gentem, unde agimus, ostenderemus ad regni Romani fastigium usque venisse (Get. 88). There is no way that such an account was originally intended to flatter the Goths and Theoderic, the addressee of Cassiodorus's lost Gothic History. The Symmachus fragment does not use any language that can be directly ascribed to Cassiodorus. It is based on two sources at least, the Augustan History and Orosius (cf. 97-98 n. 489). [6] Rather than believe that Cassiodorus copied Symmachus ad litteram, it seems more likely that this excerpt is a long interruption brought by Jordanes to the narrative, just like those passages that, as the authors highlight, he takes directly from Priscus (cf. 83-85, 98). The circulation and perhaps reception in Constantinople of Symmachus's work, as many scholars believe, has implications for the Quellenforschung. I also wonder whether Jordanes in the Romana used an intermediary source rather than drawing from several sources, especially when his use of those sources is very limited. [7]

The connections of Jordanes with Cassiodorus - his main source - are discussed in detail at pages 94-99. The accurate investigation of the sources confirms that Jordanes took notes from Cassiodorus's Gothic History. [8] This is important, especially for the identification of the Cassiodoran hand behind the three direct speeches in Get. 186-187, 203-206, 290-291 (cf. 96-97, and FHistLA, p. 207-208). Unlike the Symmachus fragment, these speeches use wording peculiar to Cassiodorus's work, especially the Variae.

Jordanes limits his praises of Theoderic in the Getica, though he certainly was the object of Cassiodorus's laudes in the Gothic History. The authors abstain from speculating about how Cassiodorus may have originally portrayed this king, but in my opinion some references in Jordanes require a consideration of this question. While the authors are very attentive in highlighting Jordanes's internal references to dates when framing the chronology of the two works (cf. 9-13), they do not dedicate enough attention to the statement in Get. 313 that the Gothic nation ended after almost 2,030 years of power (in the year 540). A discussion of the hypothesis of Heather on the bimillennium of the Goths, a very important date for the history of the Gothic kingdom, should have been included. Heather explained this number, which connects the Gothic past with the times of Moses, as part of the lost Cassiodoran propaganda which claimed that the two-thousandth anniversary of Gothic history happened in the year 511, when Theoderic began to rule over the Visigoths in Spain. [9] This can be argued also from Get. 245 on the end of the family of the Balths, a passage whose importance and Cassiodoran nature the authors notice (63, 334-335 n. 764). Considering that the story of the unifications and divisions of the Visigoths and the Ostrogoths plays an important part in the architecture of the Getica (cf. 34-36, 57-60), the question of the reunification in the years after 511 should have been here addressed. By abstaining from the question, the authors eventually fall in a sort of contradiction. At p. 43 n. 196 and at p. 357 n. 890 they support the assimilation of Theoderic with Moses. At p. 69 they do not dismiss possible connections in the Gothic history with Moses and the Exodus (which could support Heather's hypothesis on the bimillennium). At the same time, at p. 368 with n. 967 they do not exclude the suggestion by Buonuomo that the number in Get. 313 should be amended to 1,300. [10] This suggestion would connect the Gothic history to the history of Rome, which was also a part of the Cassiodoran propaganda. No matter what manuscript tradition the authors prefer for Get. 313, the number of the years of the Gothic power hides the lost Cassiodoran propaganda, which the authors seem to acknowledge (p. 63-64) but eventually prefer not to confront (cp. 99 n. 494).

Similarly, at p. 61-62 the authors reject Wolfram's hypothesis that the Amal genealogy in seventeen generations represents a parallel to the Roman kings from Aeneas to Romulus. In my opinion, their reasons for rejecting the hypothesis are unjustified. Because the authors are convinced that the Gothic History was published under Theoderic sometime between 515 and 526 (95, and FHistLA, 200-203), it is clear that Theoderic, who was the addressee of the History, equalled Aeneas as number 16 of the genealogy - which is based on the Latin Kings listed by Cassiodorus in the Chronicle published in 519. Therefore, Athalaric would be the number 17 of the genealogy as he states in Cassiod., Var. 9.25.4.

Another statement that deserved more attention is Rom. 349 about Theoderic's thirty-year peaceful reign following the death of Odoacer. This needs contextualization in parallel to Anon. Vales. 59 (cf. 204 with n. 599), no matter what is the authors' position on the sources of the Anon. Vales. 2. [11] The question is far more complex than it is presented at p. 87 with n. 438 (cf. FHistLA, 204-206). Because the authors (cf. 9-10 with n. 42) do not dismiss that this part of the Romana, including par. 349, may be in debt to the Getica - and therefore to the tradition of the Gothic History -, it is equally possible that Cassiodorus's History ended with the year 523, when Theoderic reached thirty years of rule. This could signify that Rom. 349 derives from the Gothic History.

I conclude with a general remark: While there is no doubt that the authors, here as well as in FHistLA, provide an excellent textual analysis, synthesis of the status questionis, and study of the Quellenforschung, and that they contribute many original ideas to the ongoing debate, their exasperating tendency to dismiss without sufficient examination the hypotheses of other researchers is unnecessary. It would have been better if they had taken a more moderate tone about the hypotheses of the scholars with whom they disagree. Other scholars have reached plausible conclusions based on philological and prosopographical investigations that are no less rigorous. The alternatives that the authors suggest have also their limits, and in some cases are unlikely. Sometimes new evidence resurrects interpretations that were previously rejected. The most significant recent case is King Ostrogotha, a shadowy character who had been largely dismissed because of his suspicious name (265 n. 353), but that the new Dexippus fragments have brought back to life (this helps us better understand Get. 90-100; cf. 62 n. 300, 74-75, and 265-269 with the footnotes). [12] The question of Jordanes's sources is far from resolved.

Therefore, a less dismissive approach to other scholars' positions would improve the ongoing debate in a constructive way and it would prolong the legacy of this important book as a universal tool. [13]

[2] C. C. Mierow: The Gothic History of Jordanes in English Version with an Introduction and a Commentary, Princeton 1915.

[7] For example, I am sceptical about Jordanes's use of Cassiodorus's Historia Tripartita to explain the information in the Romana from the Epitome de Caesaribus, as in The Historiography of Crisis: Jordanes, Cassiodorus and Justinian in Mid-Sixth-Century Constantinople, JRS 107 (2017), 285-288.

[11] Similarly, I disagree with the authors's assertion at page 360 n. 905 that the legate sent to Constantinople in 490 was kept there until 493: Anon. Vales. 53 and 57 refer to two different legates who have different names.

[13] Cf. at pages 7 and 95 the possibility that Cassiodorus's Chronicle was used by Jordanes in Constantinople. This hypothesis cannot be demonstrated based on the parallels that the authors suggest in JRS 107 (2017), 288-289.