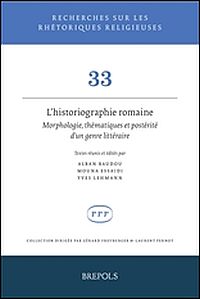 The tripartite subtitle of this volume suggests its unusual breadth: the book itself similarly divides its nineteen contributions (six in English, the remainder in French) into three sections, which do not quite match in terminology. The first and longest subsumes questions of morphology and theme into what I might describe as an 'etic' view of Roman historiography from a philological and literary perspective: it contains, for example, Engels' analysis of Polybius' preface as a programmatic statement within a literary tradition, Freyburger on the third-century antiquarian Censorinus' methods for working with annalistic sources, Fleury on Florus' use of historical figures as exempla, Marincola's wide-ranging discussion of generic similarities between historiography and epic in early Latin, and Sandberg's fascinating account of the value of material evidence not for archaic Roman history but for historiography. The second section, somewhat ambiguously titled "Les questionnements de la historiographie romaine antique", includes analyses of the investigative models used by the historians themselves (Briquel on Livy's view of the Samnites, for example), and other papers that employ their works to ask questions about Roman history and attitudes (as in Hermon's methodologically innovative recontextualization of Nerva's agrarian law based on the integration of historiographic accounts with the evidence of ancient writers on techniques of surveying). The final section, focusing on postérité, contains only one paper (Cuche on Corneille's use of Justin's abridgement of Trogus); however, issues of reception figure more largely than that in the collection: Poucet, in a foretaste of a much longer study, presents mind-bending narrative of Romulus and Remus concocted by the fourteenth-century liégeois chronicler Jean d'Outremeuse. (Jean invents a completely new set of twins also named Romulus and Remus, offspring of Amulius and the widow of a Gallic chief whom he has slain; Mars, then, with a twist that seems more at home in existentialist drama than medieval romance, transforms his own twins into their identically named younger cousins, and vice versa). And Santangelo leapfrogs from Sallust's reception of his annalistic predecessors to tell the story of the scholarly reception of the fragments of his own Histories in the Early Modern Period.

A broad range of subjects is typical of the Festschrift as a genre, but it is especially apt for this one's honorand, Martine Chassignet, best known for her monumental editions of the fragments of the Roman historians for Collection Budé. To undertake such work requires a command not only of the fragmentary historians themselves but of the intellectual world and literary practices of the authors who cite them. The scope and nature of Chassignet's accomplishment perhaps comes across most vividly in the contributions of two of the editors of Oxford University Press' Fragments of the Roman Historians, which builds upon her work: Smith's essay on the Autobiography of Augustus offers a particularly subtle tribute. It begins in a largely negative vein, challenging - though in the most respectful and courteous way - some of the more speculative suggestions recently made about this intriguing text. His aim is to highlight by contrast "the self-denying experience of saying only what we actually know about works which survive in citations by others" (339). Rich's comprehensive overview of the evidence for reported speech in early Roman historiography offers a complementary illustration of the dangers of overstatement, in this case a too restrictive dictum - as it seems in hindsight - of Hermann Peter's that Coelius Antipater, writing in the late second century BCE, was the first figure in the tradition to employ the common Greek practice of including invented speech in his narrative.

Few besides the honorand are likely to peruse the volume cover to cover except, indeed, to review it. But I can attest that a continuous reading of this 'snout-to-tail' compendium on Roman historiography was an enjoyable as well as profitable experience. Several of its articles authoritatively survey broad topics and are likely to be correspondingly valuable to students as well as advanced scholars; among them I would single out especially the pieces by Marincola, Rich, and Sandberg. The narrower focus of others will appeal more to specialists: here I particularly admired Dion's close reading of the parody of Catullus included in the collection of shorter poems attributed to the young Vergil (even if the topic is, as she admits, a little far from historiography), and Hermon's historical analysis of Nerva's agrarian legislation. (Kudos to the editors for including an index of names, subjects, and keywords to help readers negotiate the collection.) Cuche's concluding essay falls in a special category: as a non-specialist, I found it an inviting general introduction to Cornelian dramaturgy, but when Cuche suggests that Corneille's theatricalizations follow after Justin's own reworkings of Trogus, he offers scholars of ancient historiography as well a stimulating framework for thinking in general terms about the formal continuities and differences between drama and historiography.

Jacoby's collection of the fragments of the Greek historians is a treasure house of information about every aspect of classical history. Occasional long-jumping goats aside (Cato F47 FRHist), the fragmentary Roman historians, by contrast, offer more austere fare. This has to do in part with a scholarly tradition of more rigorously protecting the imperial borders of history from incursions by antiquarians, but it may also reflect the centripetal tendencies of Latin historiography itself: when fragments survive in snippets long enough to convey a narrative it is usually to offer some enigmatic detail in an already known story. By pushing the boundaries of Roman historiography to its limits, the volume as a whole - although or because it collectively shifts attention away from the well-known triumvirate of Sallust, Livy, and Tacitus (the last not even in the index) - conveys a refreshing sense of the variety and vibrancy of this tradition as well illustrating the many kinds of scholarly investigation it can host.