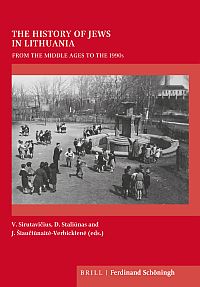 As the twentieth century dawned, more than half of the world's Jewish population resided on the territory of the former Grand Duchy of Lithuania. Many more in New York, Johannesburg, and Sydney could trace their roots back to this community. The present collective work represents the first serious English-language history of this community from its beginnings to the end of the twentieth century. These essays are written by distinguished specialists from Lithuania, Israel, the United States, and elsewhere. The volume is well edited so that it reads like a single work rather than a disparate collection of contributions. In short, this volume is required reading for anyone seriously interested in the history of Jews in Eastern Europe, Lithuania, or the USSR. Indeed, this book would serve as an excellent introduction for specialists in other areas of Jewish history (American, Israeli, Western Europe, etc.) to get acquainted with the historical development of this vitally important segment of world Jewry.

The book is arranged chronologically, with the first part (of five) dedicated to the period of the Grand Duchy of Lithuania. This section covers the period from the beginnings of Jewish settlement to the late eighteenth century and is authored in its entirety (unusually for this book, but reflecting, in part, the present state of research) by a single author, the distinguished historian of this period Jurgita Šiaučiūnaitė-Verbickienė. These seven chapters cover a variety of topics from the establishment of the Jewish community to self-government to economic activity to spiritual matters to relations with non-Jews. Throughout, these chapters are based on the extensive research done by the author and they reflect her expertise. Possibly the only weakness here is Šiaučiūnaitė-Verbickienės stress on "integration" and "coexistence". This was a pre-modern society/state and "integration" is simply anachronistic here. Neither the rulers nor the Christian peasantry nor the Jews themselves could even conceive of "integrating" the society: this is a modern conception and, indeed, in most modern societies still honored more in the breach than the observance. Be that as it may, these chapters are written to a very high scholarly level and, while one may find the author's use of "society" anachronistic, even the chapters on "how Jews were seen" by Christian "society" present interesting and well-informed arguments.

The book's second section covers the imperial period, i.e., roughly the "long nineteenth century" up to around 1918. Here we find eight articles by Lithuanian and Israeli specialists, all well-known scholars and historians. Vladimir Lenin starts off with an overview of "social, economic, demographic and geographical characters" of the Jewish community in Lithuania, drawing on sources in Hebrew, Yiddish, Russian, and English published from the early twentieth century to very recent historiography. Other articles cover topics such as the "Jewish Question", antisemitism, tensions between Haskalah (Jewish enlightenment) and more conservative trends, as well as literature, Jewish politics, and an intriguing article on "Lithuanian-Jewish political cooperation", in particular during the Duma period. Anyone who has done work on Lithuanian-Jewish history of this period will recognize the names of the contributors: besides the already-mentioned Levin, Darius Staliūnas, Mordechai Zalkin, Lara Lempertienė, Shaul Stampfer, and David Fishman. It is difficult to find much to criticize in these excellent short overviews by the top scholars in the field.

If one were to hazard a critique, however, it would be that the focus on "Lithuania" obscures the larger Russian-Polish-European context. After all, "Lithuania" did not exist during this period and even the Jewish conception of "Lita" is not really covered here (because that would entail more information about Jews in Belarusian provinces). Still, this may be an unreasonable criticism. The focus on the territory of the post-1918 state is one legitimate way of "making sense" of this complex history and the authors' discussions of these issues do not hesitate to bring in the larger imperial and European context. Still, an article comparing the Lithuanian case with, say, the Polish, Hungarian, or Romanian would have been very welcome here, in particular for non-specialists who may well assume that the historical trajectory of "Eastern European Jewry" followed the same general trends from the Oder to the Danube and from the Dniester to the Vltava.

For many readers, the section on Jews in the interwar Republic of Lithuania may well contain the most new information. Unfortunately, the English-language historiography of Lithuania in this period is quite underdeveloped, despite some important work having been done. These ten short articles cover the interwar period admirably, touching on such topics as the economy, government policy toward the Jews, education (both in state schools and in private Jewish schools), culture, ideology, attempts at bridging the cultural gap between Christians and Jews, antisemitism, and the Jewish community in Klaipėda (Memel) in this period. I would single out Vladas Sirutavičius's articles on the Lithuanian government's Jewish policies and on outbreaks of antisemitism for their informative, fair, and even-handed approach. Zalkin contributes several excellent articles on cultural history, Jewish schools, and Jewish cultural life in Vilnius, a city which of course was just across the border in Poland during this period (though always claimed by Lithuania as its capital). Zalkin also briefly but cogently discusses the development and fate of Jewish national autonomy in this period, providing an excellent companion to Sirutavičius's article on government policy. Gediminas Vaskela informs us on the position of Jews within the Lithuanian economy during this period, based on a variety of Lithuanian sources.

The shortest section in this collection, part 4, on the Second World War and Holocaust, is authored entirely by the Lithuanian historian Arūnas Bubnys. One may question the editors' decision to dedicate relatively little space to this very important tragic period but in the end this was most likely the correct approach. After all, the period of the Holocaust/Shoah in Lithuania has been researched by such scholars as Yitzak Arad, Christoph Dieckmann, Saulius Sužiedėlis, Knut Stang, and others. Furthermore, much research on this period by scholars from a number of countries is available in Western languages, including English. Bubnys's three short articles on Jews in Soviet Lithuania in 1940/41, the Holocaust itself, and Jewish resistance are scholarly and informative. A weakness is, however, that one could read these articles and come away with no idea of the very significant participation of Lithuanians in the murder of their Jewish neighbors. This is obviously a painful subject, even several generations later, but it is a subject that should have been taken on. By some scholarly estimates, between half and two-thirds of the Jews who perished in this region were killed by ethnic Lithuanians. An article here by the most important single scholar of this issue, Dieckmann, would have improved the balance in this short section. However, Bubny's contribution does provide a reasonable overview of this terrible period, even while avoiding this one very painful aspect of the Holocaust in Lithuania.

The book concludes with a short section on "Life after the Holocaust". Here Samuel Barnai contributes an overview of Jewish life in the Soviet republic with a great wealth of demographic, political, and cultural information. Sirutavičius finishes off the volume with a very informative piece on Jews during the years of perestroika, Sąjūdis, and the re-establishment of Lithuanian independence on 11 March 1990. Many Jews in Lithuania had been born in other parts of the USSR, spoke Russian, and might have been expected to view the prospect of Lithuanian independence with considerable reservations. In fact, however, as Sirutavičius shows, the careful and nuanced politics of Sąjudis and other Lithuanian parties (including the ex-communists led by Algirdas Brazauskas) helped convince many Jews that a positive future awaited them in an independent Lithuanian republic. While disagreements and strains continued - and remain to this day - on the whole the Jewish community in Lithuania has prospered since 1990 and relations between Lithuania and Israel have been positive.

To conclude, this is an exceedingly important scholarly publication, bringing together dozens of impressive articles by excellent historians. Anyone interested in the history of Lithuania, Jews in Eastern Europe, or Lithuanian-Jewish history will learn a great deal from this volume.