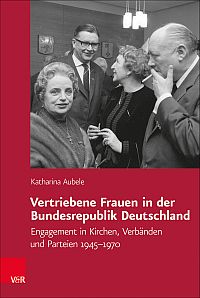 As Katharina Aubele points out in her timely and important monograph, the political and organizational history of German expellees (Vertriebene) in the early Federal Republic has primarily been narrated as a masculine story. The most visible actors in this institutional history were, almost without exception, men, who run expellee organizations and powerful expellee lobbies, particularly at the federal level. Predictably, the relevant historiography pushed women expellee activists to the margins. At the risk of some over-generalization, one could claim that women have typically featured in the relevant historiography [1] in one of two, largely anonymized roles: either as passive symbols of suffering and victimhood caused by the expulsions, or as secondary actors whose agency was restricted to local and/or familial settings, as Trümmerfrauen, mothers, wives and, more generally, enablers of more powerful male actors.

Aubeles book is a welcome corrective to these historiographical trends. It provides a systematic, far-reaching analysis of the important roles that expellee women played in the public life of the Western occupation zones and the Federal Republic from the immediate postwar years to the early 1970s. For a book that arose out of a doctoral dissertation, its scope is remarkably wide. Aubeles examination of the activities and contributions of expellee women covers three broad areas of West German society: the Catholic and Evangelical churches and associate charitable organizations, secular expellee organizations (Vertriebenenverbände), and political parties at both federal and Bundesland levels. The federal state of Nordrhein-Westfalen provided a case study, on which many of the state-level observations are based. Throughout the study, Aubele develops arguments about macro-level processes in the Federal Republic showing that although expellee women were most visible as societal actors in the early postwar era, their contributions to expellee integration remained highly significant and multi-faceted throughout the period under study and need more public recognition than they have previously received. She also pays close attention to individual women and their specific contributions, thereby highlighting the individual agency of female activists and providing an antidote to the often anonymous portrayal of expellee women in much of the previous scholarship. The women who come under detailed scrutiny represent a variety of backgrounds and political-ideological orientations, from lifelong social democrats like Lisa Korspeter to conservative aristocrats such as Baroness Gretlies von Manteuffel-Szoege and former National Socialists, including Katharina (Käthe) Zeidler. The political and societal processes analyzed are also manifold, including roles that women played in establishing organized expellee activity in the very early postwar period as well as female activists' struggles aimed at achieve respect and recognition for expellee citizens.

Aubeles research is very solid: she draws on a wide range of primary sources, including documents from eleven archives across Germany, extensive published materials of different kinds, as well as oral history interviews. She employs diverse methodology: participation research, women's and gender history, new approaches to cultural identity studies such as Till van Rahden's notion of "situative identity," which underscores the constantly shifting, fluid nature of individual identities (16). [2]

The result of Aubeles ambitious endeavor is an insightful and nuanced monograph that should be required reading for anyone interested in the history of the expellees in West Germany. Indeed, its contributions reach well beyond the rather compartmentalized field of German expellee research to include the wider histories of religion, political lobbying, party politics, and gender relations in post-1945 Germany. It is to be hoped that this fine study will find an extensive readership among scholars of these fields.