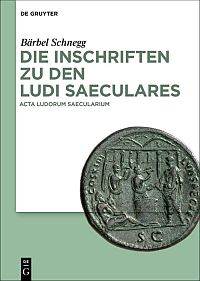 Schnegg's latest monograph provides a new edition of one of the most important inscriptions for our understanding of religion in the Roman Empire: the Acta that recorded the events of the "Saecular Games" (ludi saeculares) of Septimius Severus in 204 CE. This work gathers together her text, translation, and commentary for the Acta Seueriana, along with her translation of François Chausson's prosopography of participants in Severus's Games. It also includes a lightly updated version of her 2002 edition, translation, and commentary for the Acta of Augustus's Saecular Games of 17 BCE.

The first half of the book is dedicated to the Augustan Games, with few changes from the 2002 edition. [1] This has become the authoritative text for the Acta Augustea and superseded that of Pighi [2], for Schnegg incorporated new fragments of the inscription identified by Moretti [3] and took a careful, conservative approach to reconstructing the text. While only a handful of revisions have been made to this edition of the Acta (e.g. Fragment D-M, l. 18: FI[ 38 ] replaces f[---]), there is now the helpful addition of estimates of the length of lacunae measured out by missing letters. The text is also now punctuated. A German translation follows, along with a detailed commentary on the editorial choices.

Schnegg's analysis of the Acta Augustea remains essentially unchanged, with minor updates to the bibliography. The site of the Saecular Games near the Tiber River is now assigned the more common spelling Tarentum, rather than its variant form Terentum. The discussion of the history and significance of the Augustan Games is grounded in a close analysis of the inscribed text: for example, Schnegg's earlier discovery that Agrippa alone offered the sacrifice to Juno holds important implications for interpreting the Games's emphasis on marriage and fertility (cf. Ch. A12). Similarly, by examining the language of the inscription first before moving to literary material, she correctly observed that the ludi saeculares were not originally conceived of as ushering in a Golden Age, an important insight that is still often overlooked today. [4]

In the second half of the book, the Severan text is presented and discussed with great care. Schnegg has been able to study the fragments via autopsy, which has led to a number of discoveries. For the Acta Seueriana, there has been an overhaul of earlier attempts to arrange the fragments, and thus new line numbers have been assigned to the text. In one instance, reconstructed text fills out a line and allows for the fragment's positioning (line 185 on 155).

New readings allow for a number of names to be properly identified across all the lists in Chausson's prosopography (e.g. a new member of the college of quindecimuiri, Calpurnius Maximus, l. 25). Corrections to the names of several children who sang the Carmen saeculare or participated in the lusus Troiae shed further light on family relationships: some had parents among the quindecimuiri and/or matrons. Thus, Severus's Games staged not only the imperial family, but also the families of his elite supporters, allowing their memory to be preserved together at the beginning of the new age. There are a few missed opportunities: for example, the quindecimuir Ofilius Macedo is not recognized as a member of the gens Valeria. [5] A Valerius is central to the founding myth of these rites celebrated at the Tarentum during the Republic, and while Schnegg takes note of Valerii among the quindecimuiri in 17 BCE, ancient evidence reveals that Valerii were likely present in the college for all other celebrations of the Games, a testimony to the enduring relationship between the clan and their former "gentilician cult". Chausson's study is rigorous and useful, and he notes the need for a more thorough and complete prosopography of the Games in the future.

As with the Augustan material, Schnegg's discussion of the Severan ludi saeculares is firmly rooted in her examination of the inscribed material. For example, she points out that the names and titles of Severus and his family members were recorded at different heights on the cippus, including at eye-level so as to be legible to the viewer, while Plautianus's name appeared in small letters at the top (453). This allowed Severus to advertise his family's connection with the Antonines and present their ritual actions as central to the wellbeing of Rome. The fact that the lengthy lists of children and matrons also appeared low on the inscription suggests that their participation in the Games was important to Severan self-presentation. Despite the emphasis on family, the centrality of the emperor's role is made clear in a new reading of l. 180: Severus offered the sacrifices to Juno by himself and did not share the duty with either of his sons, in contrast with Augustus's delegation of the role to Agrippa in 17 BCE. Schnegg also examines the Severan building programme in Rome in light of the sites described in the Acta, since many of the new monuments formed a backdrop to the rituals performed in the Games. She concludes that this building programme allowed Severus to make a show of his investment in Rome and its traditions after many years of absence from the city (464-465).

Schnegg's text was not intended to be a complete update of Pighi's sourcebook, and at 527 pp., the work is admirably thorough as a presentation and discussion of the two inscriptions. The work concludes with useful indices and an appendix of coins from the Games of Augustus, Domitian, and Severus. Yet the due to the nature of the source material and the limits of space, it is not able to provide a full discussion of the relationships between each celebration of the ludi saeculares, from their origins as ludi Tarentini in the Republic to the other performances of Claudius, Domitian, and Philip the Arab. The Severan Games were not simply a revival of Augustus practice, but were influenced by other celebrations: for example, Severan coins commemorating the sacrifice to Terra Mater (RIC 4.418 and 761) were modelled on a scene from Domitian's ludi saeculares issues (RIC 2.1² 612-614), which is lacking in Augustan coinage. Further investigation of the relationship between the Saecular Games and imperial manipulation of the concept of the "age" (saeculum) would assist in understanding Severus's motives and timing when planning his Games: "saeculum rhetoric" appears on his coinage as early as 193 CE, and follows models created by his Antonine predecessors.

This book is an impressive contribution to the fields of Roman history and religion, and will be an essential reference for students and specialists alike. Above all, the improved texts, particularly of the Acta Seueriana, respond to a great need in epigraphic studies, while generating new questions and permitting further investigations into the history of the Saecular Games.

[4] Jussi Rantala: The Ludi Saeculares of Septimius Severus. The Ideologies of a New Roman Empire, Routledge 2017.