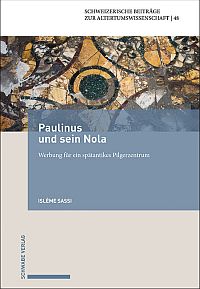 The aim of this study by Islème Sassi is to investigate how, through his poems and letters, Paulinus, the bishop of Nola, promoted the cause of Christianity, and in particular how his policy transformed "an insignificant local martyr's shrine into a crossroads of the Christian world" (17). The existence of a plan to "Christianize" the Roman world through holy figures was not new, as the core of such a complex transformation had begun under Constantine the Great. Accordingly, sites connected to key figures of the Gospels as well as the Old Testament were the first to receive a targeted reevaluation. This was showcased in the western part of the Empire by the basilica of St Peter in Rome. This transformation signified not just the construction of a physical space, but also the formation of a community identity and a sense of belonging, expressed additionally in collective mobility, pilgrimage and piety.

Sassi's book introduces the reader to new paths within Paulinus' strategy, itself at the heart of an empire striving to build a new Christian identity. The work comprises four main chapters which investigate nine aspects addressing valuable topics of discussion. The considerations are based on a meticulous analysis of a corpus of 50 letters, 20 poems, and 14 Natalicia (poems composed in honor of the martyr Felix) which were recited annually on the day of his feast and were apparently highly appreciated by its audience.

The first introductory chapter (15-42) offers a methodological overview of the research questions highlighted by the term "Werbung", which stands for promoting, advertising or even propaganda. Sassi views it as an intrinsic "form of interaction within a society" (31): in the socio-cultural milieu of the fourth - fifth centuries and in this specific context, "Werbung" establishes a connection between Paulinus and his interlocutor(s) to raise attention and direct interest towards his life-long project at Nola. To this end the subsequent chapters (2, 3 and 4) explore and closely trace the steps taken by the bishop to enhance Nola through the systematic development of the cult of the martyr Felix.

Crucial to this intent was the promotion of the site itself in three major steps (chapter 2). The first was to ensure the visibility of Nola as an alternative station on the pilgrimage route from Rome to North Africa or to Palestine (Nola inclyta - 44-73). This was followed by the structural design of the cult center, which consisted of renovating existing structures and building a large basilica (Nola nova - 73-112), and was consolidated by the celebrations of an annual festival in honor of Felix (Nola sollemnis - 112-149). The early tomb of St. Felix was enclosed by Paulinus in an aedicule extending westward through the addition of a second apse and linked to the great basilica Nova (dated to 403) with a triconch presbytery. Nola thus represented the pinnacle of the architectural evolution of a large martyrial shrine with magnificent decoration in marble and mosaic.

Paulinus for his part described the new buildings and endeavoured to explain the symbolic content of his work to his audience. These expositions were possibly intended to motivate pilgrimage to Nola: on the one hand, to worship the precious relics of various martyrs, which promised healing and salvation (not only those of St. Felix but even a fragment of the True Cross), and on the other, to admire the magnificently adorned buildings with valuable votive gifts.

Chapter 3 focuses on the promotion of the figure of Felix, which included building on the credibility of his existence and his martyrdom (Felix martyr 157-182), staging him as a patron (Felix patronus - 182-196), and insuring his reputation and lasting power as a miracle worker by healing the ill (Felix Medicus - 196-209).

Sassi rises significant questions concerning the ways in which these complex aspects were negotiated at Nola, not only physically by means of building projects but also more broadly by capturing the attention of the audience of Paulinus' letters and poems, which were disseminated among the most diverse social strata of the Roman society - from high nobility to illiterate rural population. True to the principle of euergesia, Paulinus strove to put his spatial imprint on the sanctuary and its surrounding landscape, while the solemnity of the annual festival and recitation of the Natalicia (on the 14th of January) lent an additional degree of attractiveness. The bishop described the visitors to the sanctuary and selected, among the flocks of anonymous pilgrims, charismatic personalities such as Nicetas bishop of Remesiana (especially 125 and 130) and Melania the Elder (65) to build the reputation of the sanctuary and to support his claim for the spread of its popularity far beyond Campania.

In fact, Paulinus followed the prominent examples of Damasus in Rome and Ambrosius of Milan. During his episcopate (366-384) Damasus promoted the cult of martyrs by monumentalizing their tombs and composing epigrams in their honour; these poems were incised on marble slabs and displayed to devotees of all nations flocking to Rome. Likewise, through the inventio, Ambrosius promoted martyrs and incorporated holy relics, for example as in the basilica Apostolorum (today St. Nazaro), as sign of the Christianisation of the city.

Finally, in Chapter 4, insight is given to the personality of Paulinus, who advocates himself as an ascetic, embracing the ideal of asceticism and renouncing his wealth and career to gain benevolence at the final judgment (Paulinus monachus - 215-280). An important consideration is the presentation of Paulinus as a divinely inspired poet (Paulinus vates - 280-328). Sassi argues rightly that while Paulinus' poetry is based on the classical tradition, it fulfils a different function as it strives to express a deeper spiritual meaning. In the last part of this chapter the discussion touches on how Paulinus acts within his far-reaching network of friendship, true Christian brotherhood preordained by God Himself and rooted in Christ (Paulinus amicus - 328-367).

The work concludes with a brief epilogue (369-374), an extremely useful apparatus with Paulinus' Natalicia and Epistulae organized in chronological order (377-378), a rich bibliography and an index. Unfortunately, the illustrations are very limited, and the book would have benefitted from the inclusion of a geographic map and a map of Nola in addition to the three plans of the Vetus and Nova dual-basilica complex.

In sum, Islème Sassi's book stands out as ambitious in its scope and wide-ranging in terms of its themes. Skillfully, analytically and with daring mastery of the subject, she explores the evidence and sheds new light on the complexity of late antique society and what a strong impact and the far-reaching influence such bishops had in the Orbis Christianus. Taken together, the chapters successfully paint a multifaceted picture of Paulinus of Nola, an outstanding man of his time; although nuanced by a clear devotional intent, his ambitious ideas were strongly oriented towards the goal of placing a peripheral site at the center of devotional routes. This strategy indeed echoed the demands of a growing community of faith to congregate around the shrines of their new elected heroes and to cling to symbols of faith. While the landscape of the Mediterranean would soon be studded with martyrial shrines, at Nola the lasting mark of the Paulinus' painstaking promotional policy made himself and his Felix immortal.