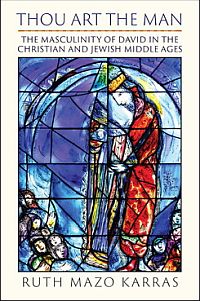 King David in the Old Testament has always been one of the best-known biblical figures, both in ancient and in medieval times, and his adoration continues until today, as the beautiful cover illustration of Ruth Mazo Karras's new book demonstrates, showing David in the stained-glass windows of St. Stephen's Church in Mainz, Germany, created by no one less than Marc Chagall. Every relevant lexicon or encyclopedia contains entries on this famous king, illustrating his triumph against the giant Goliath, his later wisdom, and his military and political skills, but also his personal failures when he lusts after Uriah's wife and has him placed at the front of the army to get him killed in war.

Mazo Karras now tries to tease more meaning out of this figure concerning the concept of masculinity as it dominated both Christian and Jewish culture during the Middle Ages. This is an interesting further development of the well-known author's previous studies on masculinity, such as her From Boys to Men (2003) and Sexuality in Medieval Europe (2017). Here, however, the focus rests more on the visual and literary projection of this notable king from the Old Testament as a representative of the concept of masculinity, a somewhat tenuous approach.

The five chapters trace the various aspects highlighting David's life, and Mazo Karras makes great efforts to document them with numerous references to medieval art works and literary texts dedicated to this Israelite king. In brief terms, the focus rests on: 1. prowess and piety; 2. love, friendship, and loyalty between men; 3. sex and penitence; 4. sacred music and David's artistic skills; 5. building a dynasty. The volume is rounded off with a conclusion, an extensive apparatus, a bibliography, and a valuable and detailed index.

The author concentrates so much on King David because it allows her to discuss the phenomenon of masculinity as it took shape in medieval culture, both Christian and Jewish. But for a long time, Mazo Karras basically retraces the origin of the story of King David in the Old Testament and then examines what sources there are from the Middle Ages reflected on him. She proves her extensive expertise on the relevant biblical scholarship and makes it to bear on her discussion of the medieval representation of David in those five different stages of his life. Since Mazo Karras brings her solid understanding of the Jewish and the Christian sources to the table of her examination, she succeeds in presenting a broad perspective of images projecting this king in both religions and hence of their respective written sources.

I am not so sure whether the theoretical reflections on masculinity are of particular use here, especially because the concept relied on seems a bit simplistic: "Since masculinity is defined in large part in contrast to femininity, it both shapes and is shaped by male interactions with women. But masculinity is, of course, also created by relations among men" (64). Those, however, are determined by struggle for dominance, a somewhat simplistic or too binary approach, I think, especially because this topic has already been discussed from so many different perspectives, whether in terms of male bonding, male friendship, or male self-representation in the Middle Ages. [1] However, Mazo Karras's study brings to light the particular angle of King David's masculinity, and perhaps even homosexual tendencies. Again, this topic has been discussed already widely, whereas here it is just touched upon superficially, leaving us a bit frustrated. [2] Nevertheless, we can reliably follow the author in her further investigations of the Jewish commentary (Avot) and then the Christian interpretations of David's friendships. Of course, as before, this is all very well-trodden ground, especially when Mazo Karras engages with the famous treatises by Aelred de Riveaulx or Peter Abelard, though then she moves fairly far away from King David, until she then turns to a discussion of allegorical readings involving that figure once again, here drawing from an impressive variety of written and visual documents, such as the illustrated Morgan Bible or the Mistère du Viel Testament, confirming the centrality of this theme.

Mazo Karras's particularly valuable contribution consists, as the following chapters also demonstrate, in adding a wide range of sources from the Jewish and the Christian tradition in tandem with each other, which ultimately confirms the extent to which David as a monumental figure assumed critical importance for both religious groups. The author opens our eyes toward the much broader theological discourse prevalent in the Middle Ages, involving both religious groups in their close engagement with the Old Testament. Moreover, Mazo Karras also adds relevant comments by Muslim authors because the David story was also included in the Qur'ān. The differences rested in the allegorical interpretations of the various elements or figures associated with David.

Whereas the early parts of this book seemed to operate more on a superficial level, offering primarily summaries and paraphrases, the second part yields many valuable insights and engages with a wide range of sources, both Jewish and Christian. For instance, David's guilt regarding Uriah and his wife is viewed from a variety of perspectives, either as the result of his sinful lust, or of his general human sinfulness. His repentance was thus identified as a model for future Christians and hence as an example which Thomas Becket used to warn King Henry II about his failures as a ruler. As much as we can regularly see the (near) naked Bathsheba in the bath, the real emphasis hence rested on David's repentance once admonished by the prophet Nathan. In the late Middle Ages, the viewpoint seems to have changed, with Bathsheba increasingly being presented as a seductress and David as an innocent victim of her female snares. At this point, Mazo Karras returns to the discussion of masculinity as represented by David who was weak in face of the attractive woman in the bath, and whose role as king became questionable because of his waning sexual potency. All of that has a direct bearing on the political evaluation of kings in the high and late Middle Ages, who were expected to have concubines next to their wives, and this even in their old age. It seems a little too flippant to remark that there was a "need for the king to be sexually active" (135), as if that would confirm the validity of King David as a model for the discourse on royal masculinity, even though it is possible to refer to the presence of concubines at many different royal courts.

It is common knowledge that David represented the ideal musician, and many poets such as Gottfried von Straßburg included references to him in their works for that purpose (here ignored, as many other vernacular narratives). Mazo Karras explores this topic further in the fourth chapter with the help of numerous visual depictions from medieval art and literature, and this both in Christian and Jewish works. She examines in this context the issue of masculinity more in a physical context, here also engaging with the sexual connotations of dancing and exposing one's body.

Finally, in chapter five, Mazo Karras discusses the association of King David with the establishment of his dynasty, hence with virility and progeny, certainly clear elements of masculinity, as present both in the Jewish (such as in the Mishle Sendahar, to mention at least one text) and Christian discourse on this king. Altogether, this proves to be yet another deeply learned and well documented study, although I fear that the theoretical discussions of masculinity fall a little short in favor of extensive interpretations of so many religious sources. The many black and white illustrations could have been reproduced at a higher level. Although the topic covers such a broad spectrum (Jewish and Christian), I would have liked to read more about the depiction of King David in secular literature, especially in romances. Altogether, this is an excellently researched study, well documented, and the index at the end is a real plus.

[1] See, for example, the contributions to Becoming Male in the Middle Ages, ed. by Jeffrey Jerome Cohen and Bonnie Wheeler, New York/London 1997); or to Friendship in the Middle Ages and Early Modern Age: Explorations of a Fundamental Ethical Discourse, ed. by Albrecht Classen and Marilyn Sandidge (= Fundamentals of Medieval and Early Modern Culture, 6), Berlin/New York 2010, neither one consulted.