Ruth Mazo Karras: Thou Art the Man. The Masculinity of David in the Christian and Jewish Middle Ages, Philadelphia, PA: University of Pennsylvania Press 2021 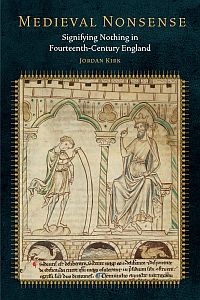 What an intriguing title, Medieval Nonsense! It entails the question whether medieval people could have imagined something like 'nonsense,' and this in a world where virtually everything in material and spiritual terms carried allegorical, symbolic, moral, and anagogical meaning. Scholarship has already approached this question in various fashion, looking at early and late medieval German or Occitan poetry. [1] Maybe, however, we can never fully talk about nonsense in any verbal utterance because each one, as absurd as it might be at first sight, carries some sense, which might be elusive, but is certainly always there. The actual question hence pertains more to signification, as the subtitle of Jordan Kirk's monograph highlights. In fact, many if not almost all late antique and medieval theologians, philosophers, and other writers were deeply involved in the question of what language signifies, which much later Ferdinand de Saussure (d. 1913) so powerfully captured and developed further with the dialectical pair of signified and signifier.

Some of the best medieval poets definitely played with both dimensions and challenged their readers already at that time to probe more deeply the depth of their poetic statements, such as Geoffrey Chaucer, on whose remarks in the House of Fame regarding language Kirk focuses on in the first chapter (the tregetour). But can there be something like a "reine Sprache," as speculated on by Walter Benjamin, whom Kirk includes in his discussion to provide theoretical material for the further examination of intellectual heavy-weights such as Anselm of Canterbury, Priscian, Augustine, and Boethius? In many cases, we are dealing with onomatopoesis, a term which Kirk seems to avoid deliberately, if I am not mistaken, hence with a poetic strategy to play with sounds and yet to aim for truth, or at least meaning, in human speech, both in musical-aesthetic and in epistemological terms (43). The question discussed, hence, concerned the relationship between meaning and sound, spirituality and language, certainly an issue which modern linguists continue to examine.

After a long theoretical first chapter, which tends to ramble a little, the author then turns in chapter two to the Oxford scholar Walter Burley who composed his commentary of De interpretation and the Commentarius in librum Aristotelis Perithermeneias in the first decade of the fourteenth century and explored, like other contemporaries (William of Sherwood: buba blictrix), the phenomenon of sound without meaning: vox non-significativa (53). This opens interesting perspectives toward medieval linguistics, which were rather sophisticated and anticipated many concepts still current in modern theoretical discussions of the human language. Little wonder that Kirk finds plenty of occasions in that context also to engage with the thoughts of Roger Bacon, a man of many foresights already in the late Middle Ages.

Kirk makes great efforts to examine Burley's logic at considerable length and can thus lay bare significant insights into the nature of the human language discussed by this logician. This then serves him in the third chapter to discuss the mystical treatise Cloud of Unknowing from around 1380, where the apophatic nature of the mystical exchange with the divine stands at the center of attention, as in many other mystical texts, which are, unfortunately, mostly left out here. The anonymous poet focused specifically on the meaning of seemingly meaningless syllabi and endeavored to comprehend the properties of language that way. Although there are litil worde, they still mean much, but maybe not in ordinary logical terms, as is to be expected from a mystical author. Meister Eckhart would have served here well as a great inspiration, but Kirk is entirely focused on English literature. The question raised by him also pertains to the meaning of simple noise, a considerable factor in all soundscapes, especially when confronted with the nothingness within the mystical space.

Chapter four brings to the discussion the fourteenth-century Middle English poem St. Erkenwald (only 352 lines), where the issue rests on how to decipher mysterious letters on an epitaph, certainly a critical riddle predicated on caracteres (107). Only if the divine spirit enters the letter, can the human mind solve the problem, certainly a fantastic approach to the ultimate meaning of all language, which needs to be 'baptized' in order to become comprehensible. This would amount to a spiritual etiology of poetry as such, an observation with which Kirk abruptly concludes his dense and intelligent investigation. He claims, ultimately, that the original signs of all language cannot be espied since they find expression only in secondary characters, sounds, or letters.

Medieval Nonsense, thus, does not deal with 'nonsense' at all, but with the spiritual sense behind all linguistic codes, as was already discussed intensively in the late Middle Ages. It is understandable, though regrettable, that Kirk limits himself to Middle English texts; he would have certainly profited from a widening of his perspective to include also continental mystical texts. I also wonder to what extent the approaches pursued in those two texts might have appealed to posterity, as the case of Chaucer indicates, whom Kirk studies in the first chapter.