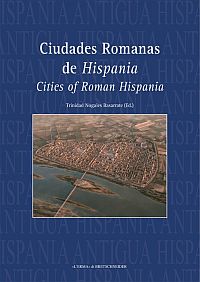 The edited volume under review is the result of a series of lectures held at the Museo Nacional de Arte Romano in Mérida (MNAR) between September and December 2020. The limitations of the pandemic led to one major advantage and that is the recording of these presentations is available via the channel of the MNAR on YouTube. [1] The swift publication of the book, only one year after ending the lecture series, is not visible in the quality of the book. The massive tome, printed in A4 format, has been edited with care and printed with full colour images. The images give us the needed visual aid to understand the archaeology, the different city plans and 3D reconstructions of cityscapes. The introduction of the book holds an important promise: as the second lecture series is running, we should expect a second volume and even possibly a third volume to be published.

The book is divided in three sections following the provincial divisions in the early empire: Hispania Lusitania (33-188); Hispania Baetica (189-296) and Hispania Tarraconensis (297-466). In total 32 cities are treated in the volume, eleven from Lusitania, eight Baetican and twelve belonging to Tarraconensis. This would be just over one tenth of all cities on the Iberian Peninsula, following the number of oppida given by Pliny. The selection of the cities includes the three provincial capitals and most of the conventus capitals. It is to be expected that the excluded conventus capitals, Scallabis, Gades, Clunia and Asturica Augusta, were preserved for the following volumes. The focus of this first volume is clearly on Lusitania, for which quarter of the communities has been treated. This focus can be understood from the relation modern Mérida has with the region as it was the capital of the province. Most of the treated cities are rather famous examples following the classical idea of a monumental Roman city. This comparison with Rome is clearly set out by the first chapter by Lucrezia Ungaro treating Rome and comparing it to the "Rome of Hispania": Emerita Augusta. I hope that the subsequent volumes will give a bit more attention to the other provinces and less 'Roman' urban centres.

Nonetheless, the variation in cities and authors has led to a volume with a multitude of views on urbanism. As such it provides the reader not only insights into the different cities, but also different ways of studying urbanism. We see a combination of the classical urban studies based on city planning and the Bauforschung as we know from the early urban studies on the Iberian Peninsula [2], and the use of the latest techniques. Most chapters provide a general overview of the work done in the past decades, combined with the latest advances from excavations done in the past few years. Several go further and give us insights in the latest (non-destructive) methodologies for the study of antique cities, such as 3D-reconstructions of buildings and cityscapes, as well as the geophysical techniques. With the variety of contributions the reader might require an overview to place the diversity of studies within the larger field of urban studies on the Iberian Peninsula, this is provided final chapter by Sabine Panzram. As has been pointed out by Walter Trillmich during the book presentation in Hamburg, the book neatly shows the maturation of the field in the past forty years.

The chronologic focus of the chapters tends to be on the first two centuries of the Principate, when the cities were at their height and we see a boom in construction of monuments. As a result of the focus on the success of the Roman city, the Augustan and Flavian period receive most attention as the two major periods for urban development on the Iberian Peninsula. Although some chapters extend the scope to Late Antiquity and the urban changes that took place in this period.

The volumes fit perfectly within Ciudades romanas de Hispania series of L'Erma di Bretschneider treating some of the cities of the volume under review in separate books. As such, it is surprising the book has not been incorporated into this series. Beyond the publications of L'Erma we can put the book in the line of publications like Hispaniae Urbes edited by Beltrán & Rodríguez [3] and the above mentioned work by Trillmich & Zanker. These works, and the one under review, provide us with dioramas to understand the diversity of urban forms on the Iberian Peninsula.

Due to its broad coverage of different cities and research methods this volume could be a good introduction into the latest on urban studies on the Iberian Peninsula. The relatively long English abstracts preceding each chapter does allow those less familiar with Spanish and Portuguese to get most out of the chapters. A small remark to make is the missing of a map with the cities treated in the volume to create an overview for those not familiar with the ancient cities on the peninsula (the map on page 429 gives the location of most cities form the province of Tarraconensis). Where the volume more economically one could even imagine it becoming central to teaching at universities. Unfortunately, the price keeps it out of range for most people and even some institutions. The lectures found on YouTube do give us free access to the chapters. After reading the book we can only hope that the promise of the introductory chapter will be upheld and the subsequent volumes will see the light soon.