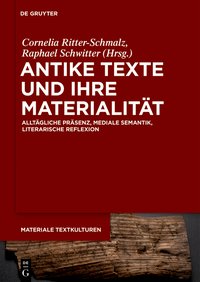 This volume, part of a series sponsored by the Heidelberger Sonderforschungsbereich 933 "Materiale Textkulturen. Materialität und Präsenz des Geschriebenen in non-typographischen Gesellschaften," explores the relationship between ancient texts and the material upon which they were (or were alleged to have been) composed. Half the contributions are in German, half in English. A variety of methodological approaches is deployed, from a paratextual analysis of the prose prefaces in Martial to material classification of ostraca from Egypt. Since the publication of this volume, eight more have appeared in the same series. To reduce the point of this one to a single phrase, "the medium is the message."

A brief introduction by the editors juxtaposes a wooden tablet from Vindonissa, addressed by a father to his son, with Ovid's hope that his beloved will send him just such a tablet, inscribed with the single word ueni (Am. 1.11.15-24). Ovid's lines exploit all the signal features of the wax tablet: it is portable, it is legible, it is covered to the edge with writing, and it prompts an answer. Ovid's eye for exploiting written media is featured elsewhere in the volume as well, especially at the end of Cornelia Ritter-Schmalz's thought-provoking discussion of body parts in contact with a correspondent's writing materials (229-232). If an ancient writer or reader might leave smudges of sweat or tears on a papyrus scroll or a wax tablet, our pristine texts composed and read on screen seem woefully impersonal by comparison.

The chapters are distributed between four sections, whose titles, paraphrased, cover: the relationship between epigrams on stone and on papyrus; the limits and scope of different formats for an ancient text; the possibilities afforded to a poet by the fiction of a poem as a material object; and textual transmission. An epilogue by Ulrich Eigler, the honorand of the volume, unpacks Pilate's terse dismissal of the titulus that he authorized on Christ's cross, quod scripsi scripsi (John 19.22), to point the irony that IESVS NAZARENVS REX IVDAEORVM is one of the most consequential inscriptions ever recorded.

Asked to name writing materials from the ancient world, many of us might not think of ostraca. These have usually been studied by papyrologists, who are interested in the texts and not the surface on which they were written. Clementina Caputo surveys recent studies of ostraca's physical properties to show what can be gained from close attention to their material, such as evidence from the House of the Ostraca in Narmouthis in the Fayum for a user-friendly filing system: triangular sherds were inscribed with a number picked out in red and underlined at the apex of the triangle, which therefore functioned like a readily visible filing tab. In Caputo's chapter, the connection between text and material is tight and correspondingly illuminating. More abstract is the contrast between three water-borne craft and the texts that convey them, teased out by Adrian Gramps, or the manner in which Horace exploits touch and voice in the last two poems in Odes II, identified by Tom Phillips.

Choice of language, and command of it, emerge as a diagnostic of intended function: a sub-category of papyri, άποκ`ίματα, which are composed in Greek instead of Latin and display some insecurities in grammar and idiom, are concluded by Anna Plisecka to be a sub-group of imperial decisions issued in Alexandria during a visit by Septimius Severus and Caracalla and copied for private use. Physical appearance also contributes to meaning: just as handwriting, illustrations (if any), and quality of papyrus can distinguish a fancy scroll, an inscription on stone can be embellished by inlaid materials - at least, this is the claim of a selection of encomiastic texts from the Carmina Latina Epigraphica discussed by Raphael Schwitter, where color, gilding, and light are employed to enhance the laudatory atmosphere. Obscenity, too, exploits physical properties: Laure Chappuis Sandoz shows how the Priapea ventriloquize the wooden image of the deity delivering his witty and indecent text.

The epigram, the most epigraphic of literary genres, is predictably prominent in the collection. So common was the formula sit tibi terra leuis on ancient Roman gravestones that it was frequently abbreviated STTL. Hartmut Wulfram traces the presence of this formula in literary epigram, including seven markedly varied instances in Martial, usefully tabulated (61), where three instances in Book VI (i.e., at the center of the corpus) are flanked by two in the first five numbered books and two more, both parodic, in the last six. Two subsequent uses of the formula, by pseudo-Seneca and Ausonius, vividly testify to Martial's influence in transferring the formula from the stone to the page.

The reading process on stone is tightly circumscribed: the reader of a funerary epigram must be in front of the monument, must see it as it was laid out to be seen. As Gregory Hutchinson observes, however, a scroll, being portable, can be read at virtually any time and in any place, so that the author cannot control the circumstances of its reception or even - given the vagaries of copyists - the details of its appearance. A related contrast is explored by Cecilia Nobili in comparing inscribed epigrams for athletes, guaranteed permanence by the medium of stone, with epinician odes, composed for the moment and laced with topical relevance.

The volume contains some helpful tables. The transformation of the funerary epigram into a Christian medium by Gregory of Nazianzus is illustrated by Jochen Schultheiß in an illuminating three-page categorization according to speaker, addressee, form (monolog or dialog), and literary and epigraphic precedents (88-90). The XII Panegyrici Latini, mesmerizingly similar to the uninitiated, are immediately identifiable as distinct recreations of an ephemeral occasion in Cédric Scheidegger Lämmle's enumeration of their numbering, titulature, content, date, and length (273). Similarly synoptic and useful are Paolo Cecconi's series of tables illustrating the copies, materials, formats, and content in which the Shepherd of Hermas is transmitted (314-317). Comparably useful are the five comprehensive indexes to the volume: names and places; papyri and ostraca; inscriptions; manuscripts; and authors and works.

Despite these useful aids, however, no attempt has been made to relate the chapters to one another. Apart from those by the editors themselves, which include a few very general references to other chapters, I noticed just two cross references, also very general. Even the same text, such as the prose preface in which Martial quotes the titulus under his own bust in the library of his friend Stertinius Avitus (IX praef.), is discussed entirely independently by two contributors: Sam A. Hayes interprets it as an example of "metapoetic posturing" (142-144), whereas Helmut Krasser demonstrates how it conveys the closeness between Martial and Avitus, while borrowing from the plastic arts the topos of permanent survival of a likeness and applying it to literature (171-173). Whether these approaches are mutually exclusive or compatible is not addressed.

Reviews are for a book's authors, editors, and publisher, as well as for its readers. De Gruyter urgently needs to have the English of second-language authors edited by native speakers who are also experts in the relevant discipline. Parts of at least three of the articles in this volume need meticulous correction to make them comprehensible. As a first step, all editors of multi-authored volumes for De Gruyter should be required to switch their computers to the language of the individual submission, so that the editing feature alerts them to typos, solecisms, and non sequiturs. This stimulating collection would have benefited accordingly.