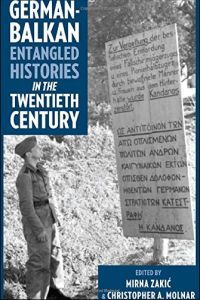 Edited by Mirna Zakić, associate professor of German history at Ohio University, and Christopher A. Molnar, associate professor of history at the University of Michigan-Flint, this volume explores the interconnections between the historical experiences of the German and Balkan peoples. Following an informative introduction by the editors, in which the main ideas and the structure of the volume are well outlined, the book proceeds with thirteen case studies written by an international group of scholars, offering an interdisciplinary approach to the central topic of entanglement and its historical conditions, realities, and effects. The contributions are split into two major thematic parts and follow a chronological order. The first part, titled "War and Empire in the Balkans," deals with the first part of the twentieth century and focuses on the two world wars. The second part, titled "Aftershocks and Memories of War", deals with different memory cultures pertaining to the legacy of the destructive first half of the century.

The chronological range of the contributions starts with the end of World War I and the interwar period as the beginning of a more active presence and engagement of Germany in the Balkans. The global change engendered by the war also triggered changes in the German attitude towards the Balkans. Reacting to the Allies' policy of economic exclusion from the system of international markets, German officials aimed to secure new markets for the import of raw materials. This was attempted through ensuring political dependence of the Balkan states (confer the contribution by David Hamlin) or finding trade partners in the ethnic German minorities living in the region (confer the contribution by Bernd Robionek). Such economic policy was complemented by mythologized and romanticized national memories among German minorities, as well as by the racial ideology of the Third Reich. Even though the Balkans never became the primary objective of the increasingly aggressive economic, ideological, and political agenda of Germany in the run-up to World War II, the German state managed to fill the gap left by the collapsed Habsburg and Ottoman empires, whose interests had dominated the region for centuries.

The interplay of economic and ideological agendas soon escalated further and was imposed by force onto the Balkans during World War II. In multiple contributions, the editors and authors address the destructive effects of the German presence in the Balkans during the war, highlighting the collaboration of certain members of the local population as well as, for example, ethnic German collaborators (confer the contribution by Zakić) or collaborators from the Independent State of Croatia (confer the contribution by Mark Biondich). With such help, German occupation forces managed to impose a system of exploitation and oppression that included persecution and genocide, policing, legalized plundering, resettlement, extraction of raw materials, the mobilization of a workforce, and the use of military units to maintain order and dominance in the region and oppose the partisan forces. Both economic and human resources were extracted and mobilized in an attempt to maintain stability and key communication lines in the region, the resources of which were supposed to contribute to the overall German war effort, at the lowest cost possible.

The contributions dealing with the period after World War II approach the effects of the war by dealing with the collective memory and coping mechanisms present among selected population groups. They focus on both voluntary and forced resettlement (confer the contribution by Jannis Panagiotidis) and on how the resettled communities dealt with such experiences. This also includes the groups who considered themselves victims but were nevertheless part of the economic exploitation and ideological mobilization of the Third Reich. An obvious example is the Croatian emigrants in Germany from the Independent State of Croatia, and their unsuccessful attempt to label themselves as innocent victims of the socialist Yugoslav regime (confer contribution by Molnar). Perhaps the most intriguing contributions are the memories of people who were part of the Third Reich's resettlement program for ethnic Germans from the Balkans undertaken to achieve the national consolidation of the German people (confer the contribution by Gaëlle Fisher). For many ethnic Germans in the region, resettlement was an ambivalent experience, associated with high hopes and expectations, but soon followed by a series of disappointments and a sense of betrayal. Resettlement caused ethnic Germans to re-evaluate their understanding of home, homeland, and belonging in postwar Europe. Resettlers were simultaneously victims, as they were treated poorly by the national-socialist regime, and accomplices in the national-socialist machinery of war and terror, as they occupied a privileged position and profited from the misfortune of persecuted groups. Nevertheless, when coping with their experiences, they sometimes distanced themselves from their personal agency, considering themselves victims in their collective memories.

The major themes of the volume, such as imperialism, war, exploitation, migration, and memory, serve as the main points of multiple entanglements between Germany and the Balkans throughout the twentieth century. These entanglements and their effects are complex and the authors of the contributions do not try to simplify them. As Gregor Kranjc points out in his contribution, while historians often seek political explanations for complex historical experiences, the reality is that entangled circumstances can be simply confusing and contradictory to the people experiencing them. Sometimes, the violent entanglements imposed by World War II remain unresolved and produce unrealistic narratives of how to cope with the traumatic past. The volume conveys an image of German-Balkan entanglement blurred by the troubling memories of a destructive ideology in the service of economic exploitation. Rather than being considered as simply a grim perspective, this should be understood as a valuable lesson, illustrating the importance of researching and acknowledging various forms of entanglement, because, as we learn from the volume, what was once entangled, is later difficult to untangle.