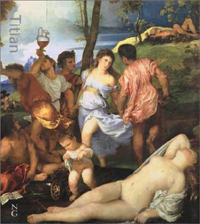 Since the beginning of this year the British media have focused almost exclusively on Messrs Blair and Bush and the crisis in Iraq. Some weeks ago, however, politics had to share the stage with Titian, as the National Gallery's exhibition, the first monographic show on the greatest of all Venetian Renaissance painters in the UK, opened its doors.

Publicity for Titian has happened on an unprecedented scale: on the day of the show's opening BBC Radio 4's current affairs programme Today interviewed the exhibition's chief curator, David Jaffé, who exclaimed one was tempted to 'lick' Titian's paintings (given the poisonous pigments used for practically all of the works, probably a one-off). Titian has since been reviewed enthusiastically in all daily papers. So far two television programmes on Titian have been broadcast, one an hour-long documentary on the conservative BBC2 reconstructing the painter's studio, the other, on the more populist Channel Five, a more light-weight introduction by TV presenter-cum-art historian Tim Marlow (only half an hour long and interrupted by commercials, given the concentration span of Channel Five's average viewer). Sponsored solely by Barclays Bank, the exhibition has been advertised in the printed media and on the internet - so effectively that at the time of the opening 11,000 advance tickets had been sold over the internet alone. Barclays claim to have created an exhibition which will open up the arts to a wider public. The sponsor's foreword does not reveal who this wider public is going to be, but the exhibition's layout, catalogue and video speak for themselves.

Titian is held in the windowless subterranean temporary exhibition space located in the National Gallery's Sainsbury wing and takes the visitor chronologically through its six rooms. The gallery's own superb collection of Titian's is supplemented by loans from museums world-wide: in the first room, entitled 'Foundations', the most striking painting is the large devotional panel of "Jacopo Pesaro kneeling before St Peter" (1506-11) from Antwerp, seen here for the first time since its cleaning and revealing Titian's early colouring and brushwork hitherto under-appreciated in this work. The following room is dedicated to a hypothetical reconstruction of the "Camerino" of Alfonso d'Este, Duke of Ferrara. It is the exhibition's great achievement to have brought together almost all surviving pieces of this fabulous connoisseur's cabinet: for the first time since the early 17th century, the National Gallery's "Bacchus and Ariadne" has been reunited with the "Worship of Venus" and the "Andrians" from the Prado, Giovanni Bellini's "Feast of the Gods" from Washington, and three out of ten canvases by Dosso Dossi which constituted a frieze above the main paintings.

The exhibition's curators have rightly called this assembly a once-in-a-lifetime opportunity to see all of these paintings together. It would have been even better if Antonio Lombardo's marble reliefs from St Petersburg had joined them (the computer generated reconstruction shows them placed above the doorways leading into the "Camerino") but, sadly, none of the loans from the Hermitage (Titian's "St Sebastian", formerly in the Barbarigo Collection, makes an appearance only in the catalogue) came to fruition due to legal problems. Another loan which did not materialise, though it appears in the catalogue, is the Borghese "Sacred and Profane Love" which would have hung here with "Flora", one of the standard 'touring Titians' from the Uffizi.

Following the stunning "Camerino" reconstruction, the next room somewhat loses momentum. Entitled "The 1530s: Landscapes", it brings together quite disparate images such as the Paris "Madonna of the Rabbit" of 1530 and the rarely seen double portrait of "Georges d'Armagnac, Bishop of Rhodes, with his Secretary Guillaume Philandrier". While the former looks back to the atmosphere of post-Giorgionesque idyll as seen in the "Andrians", the latter prepares for the next room (across the exhibition gallery's central hall) which, with the exception of the Naples "Danaë", is dedicated to portraits. The National Gallery's "Vendramin Family" is hung here with likenesses such as "Pietro Aretino" (Pitti Palace), "Ranuccio Farnese" (Washington), and "Clarice Strozzi" and Titian's "Self-portrait" (both Berlin). While this is a great room to manifest Titian's talents as a portraitist in the 1540s and to demonstrate his much looser brushwork and increasingly slow and repetitive layers of glazing, it becomes eminently obvious that wall space is insufficient: "Paul III" from Naples has been placed near the fire exit in a corner where it is impossible to appreciate the portrait's prowess.

The last small room and the central hall present paintings from the 1550s and beyond. Again, space in the small room is uncomfortably limited, and works such as "Jacopo Strada" (Vienna) and the "Ecce Homo" (Missouri) can hardly be viewed under these cramped conditions. As three of the paintings in this room, the "Tribute Money", the "Allegory of Prudence", and the "Virgin and Child" come from the National Gallery's permanent display, regular visitors to London can be more forgiving, but one is made yet again painfully aware of the limitations of the Sainsbury Wing's basement as a temporary exhibition space. To be sure, the curators have meant well in their ambition to mount a show to rival in scope "Titian, Prince of Painters" held in 1990/91 in the Ducal Palace, Venice and at the National Gallery of Art in Washington, but the difference in venue could not be more drastic. For visitors to the National Gallery exhibition, it is a relief to emerge into the concluding main hall, the only one large enough to accommodate a full-scale altarpiece, the "Crucifixion" from Ancona (not in the catalogue), and three canvases hanging side-by-side, London's "Death of Actaeon", the "Flaying of Marsyas" from Kromeriz (not in the catalogue), and the "Tarquin and Lucretia" from Cambridge. This trio, together with the "Saint Jerome" from the Escorial on the opposite wall, allows close-up comparison of the blurry macchia paint application and thick impasto, and fine finish of detail, often within the same painting, in Titian's works of the 1570s and encourages further debate over their degree of completion.

Scholarly discourse, however, is not the aim of the exhibition. In the foreword to the catalogue Barclays' Group Chief Executive may claim that "Titian" provides an "opportunity to break down some of the barriers and stereotypes traditionally associated wit the arts through a creative sponsorship programme that increases, and inspires and educates new audiences".

Thus, the catalogue (modestly priced at £ 9.95) carefully avoids to be on the heavy side. The essays by Charles Hope, Jennifer Fletcher, Jill Dunkerton, and Miguel Falomir are fine, but the catalogue entries remain by and large basic (apart from those by the Gallery's former senior curator of Italian paintings, Nicholas Penny, and the exhibition's assistant curator Caroline Campbell), and occasionally banal and unobservant: Amanda Bradley's account of the Halifax portrait (image) from the National Gallery's own collection states that it is "one of Titian's more complex early works", but it does not discuss why that is so. The portrait is created almost exclusively by mixing three colours, white, red and, most dominantly, black. The sitter's cap, cloak and the painting's background create a fascinating contrast of black fabrics and dark tones, to which the catalogue contribution appears to be wholly oblivious.

In keeping with the Barclays objective, a 50-minute feature video further enhances the "common touch". While academic contributors, such as Warburg Institute director, Charles Hope, and Jill Dunkerton from the National Gallery's Conservation Department, have been allocated some input, emphasis is not on scholarship, but on mass appeal. After all, Titian can offer the stuff British tabloids are made of: sex, violence, celebrity. Priority is given, among others, to trendy art critics John and Katya Berger, pretty art historian Amanda Bradley, giggling seductively after she mentions sex, and artist Ray Richardson, who takes care to enunciate in an East London accent to show he, too, is a common man. Among the show's paraphernalia, the multimedia feature "Titian's Venice", accessible on two screens in the Sainsbury Wing's foyer, deserves praise for its combination of images and eye-witness reports, and weekly lectures provide an opportunity to reach a better understanding of the artist and his world. However, one may wonder whether the media hype and a certain "dumbing down" will attract new audiences, or just more of the same middle class museum goers. My recommendation is to focus on the one asset "Titian" has to offer (if one can see them through the crowds): the paintings themselves.