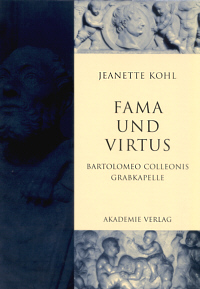 The funerary chapel of the condottiere Bartolomeo Colleoni in Bergamo, built shortly after 1470, is not an easy building. In Architecture in Italy 1400-1500 Ludwig Heydenreich briefly dealt with the building dismissively as "the first example of [Giovanni Antonio Amadeo's] strange and extravagant manner of decoration" (Pelican History of Art 1974: Yale University Press 1996, 107). Heydenreich continued to criticise the excessive subdivisions of the façade which are lacking in any unifying common measure, ending up as an "extremely primitive conglomeration of small units which cannot form an organic whole". The interior of the chapel is by no means more coherent: its focal point, Colleoni's funerary monument, is awkwardly pieced together to the eye of a viewer conditioned by the model of the Florentine Renaissance, nor does it fare well in comparison with the Lombardos' contemporary tombs in Venice. Moreover, major renovation in the eighteenth century substantially altered the interior, such as the addition of frescoes and panel paintings by Giambattista Tiepolo and others, thus adding to the impression of a lack of coherence.

The undertaking of a monograph on the Colleoni Chapel is therefore not an easy one. Jeanette Kohl makes it clear from the outset that her interests lie not in stylistic evaluation; Fama und Virtus, which is Kohl's doctoral thesis, is a study of a remarkable pompous commemorative and representational piece of architecture in the light of political iconography, historical semantics and one man's, Colleoni's, desperate desire to legitimise and perpetuate his claim to rulership.

The first chapter is dedicated to the patron and donor, Bartolomeo Colleoni, and to the designer, the Lombard architect and sculptor Giovanni Antonio Amadeo. The introductory chapter is followed by a dutiful chronological unravelling of the chapel's construction, decoration, renovation and restoration from the 1470s to the present.

The personality of Colleoni has recently been elucidated by Dietrich Erben in his doctoral dissertation (Bartolomeo Colleoni: die künstlerische Repräsentation eines Condottiere im Quattrocento, Sigmaringen: Thorbecke Verlag 1996), who dedicated one of his two key chapters to the chapel, the other being taken up by a detailed discussion of Andrea del Verrocchio's justly famous equestrian monument of Colleoni in Venice. On Amadeo, on the other hand, much work has been done by Richard Schofield, Andrew Burnett and Janice Shell; however, a monograph remains to be written. The brevity with which Amadeo is dealt with here makes it clear that the present book is not the place to learn more about this architect and sculptor. Nor is it really the place to learn new facts about Colleoni, the man. Fama und Virtus is about Colleoni's image, as projected for posterity.

The chronology chapter is in turn followed by an analysis of the typology of the chapel and its exalted location in the urban context of Bergamo. Kohl draws attention to the chapel's status as independent church ("Eigenkirche") as well as its typological position between mediaeval memorial chapel and renaissance triumphal mausoleum "all'antica".

The preliminary observations set the scene for the monograph's central chapters: a painstaking iconographical decipherment of the Colleoni Chapel's quattrocento architecture and sculpture, first of the façade and then of the interior. In view of the former's "excessively subdivided forms" and "conglomeration of small units" criticised by Heydenreich (see above), this is an unenviable and somewhat tedious task. Kohl systematically works her way from bottom to the top, fastidiously reading and contextualising the chapel's rich imagery, progressing from Herculean to Imperial iconography and culminating in an interpretation of the dominant feature of the rose window as a metaphor of "fortuna" which Colleoni had conquered (or so he wished!).

The author's analysis is the first complete account and interpretation of the chapel as it would or could have been intended and understood by Bartolomeo Colleoni and his contemporaries. Under Kohl's management the plethora of detail amount to a coherent and multi-faceted reading of the chapel as a consummate expression of the "rhetoric of triumph". The programme identified by Kohl is dominated by Colleoni's need of self-representation as champion not only of "virtus" but also of "fortuna"; its main objective is to perpetuate the condottiere's fame, especially in view of the fact that with his death this branch of the Colleoni family became extinct.

In its parts, the Colleoni Chapel does not represent iconographical innovation of late mediaeval and renaissance memorial architecture, nor does it as a whole provide a model for subsequent structures. Indeed, the comparative examples cited by Kohl demonstrate that its iconographical elements are in keeping with others of the period. It is their massive accumulation which, though previously criticised, single out the Colleoni Chapel.

Kohl draws on an impressively wide range of material, from a re-reading of documents related to the chapel's construction and early history, to the examination of funerary rites and eulogies, as well as a thorough cross-referencing of iconographical detail with both built and literary sources. This is at the very least a worthy undertaking; indeed, in some passages it provides a fascinating erudite discourse, such as the discussion of the façade's round window as a 'wheel of fortune' and its implication on the meaning of the entire chapel. There are moments, though, when one could not help thinking whether the wish to see a coherent programme had not taken the author too far in her interpretation. It is at best a difficult task to assess correctly the iconological intentions of a quattrocento warlord, and more research remains to be done in the field of commemorative and funerary monuments in Lombardy and of condottieri as a distinct class of patrons.

Despite the merit and appeal of its parts, Fama und Virtus is also a book of frustrations. These are not necessarily the author's fault. As has been mentioned above, the book is a doctoral thesis. It is one of the requirements of doctoral candidates in Germany that, in order to have the degree validated, their thesis must be published. While this has the advantage of making current research available to the public, it also presents a number of problems, some of which are borne out by the present book. Doctoral theses are an, admittedly advanced, form of academic exercise and are at least in part a demonstration of a student's ability to exhaust methodically and academically a limited subject. More often than not, this mastery of discipline manifests itself in a thorough, but long-winded and ultimately boring or turgid presentation. Parts of Fama und Virtus are no exception to this rule: while the later chapters are well focused, the opening ones seem to be lacking direction, with the comments on Giovanni Antonio Amadeo and the history of the chapel after the sixteenth century remaining largely irrelevant for the main discussion. Some of the writing is convoluted and, more often than not, references to comparative examples remain unclear. Towards the end, typographical errors increase, and the book ends abruptly without conclusion; these minor irritations appear to be the result of haste and lack of experience in academic writing.

The urgency of academic accreditation may lead to a rushed publication which does not allow for a more mature revision of the text nor for a more enlightening, let alone attractive, presentation of years of research. Fama und Virtus is pleasant enough in its layout, but the illustrations are less than helpful: many of the images are so small that they contribute little to corroborate the text, and there is no reason - other than the existence of colour postcards which allowed for easy reproduction - why Tiepolo's paintings, which receive minimal attention in the text and are of no significance for the main argument, should be reproduced in colour over several pages at the expense of good-sized photographs of the chapel itself. It is no small disadvantage that there is not one recent full-page photograph of the façade nor of the funerary monument! Thus, Fama und Virtus constitutes a step forward in the understanding of representational architecture in the late quattrocento, but it does not make a particularly enjoyable read, and, at the high price of € 79.80, it will remain a book for the shelves of research libraries despite the appeal of its subject.