Elizabeth A. Meyer: Metics and the Athenian Phialai-Inscriptions. A Study in Athenian Epigraphy and Law, Stuttgart: Franz Steiner Verlag 2010

Elizabeth A. Meyer: The Inscriptions of Dodona and a New History of Molossia, Stuttgart: Franz Steiner Verlag 2013

Elizabeth A. Meyer: Legitimacy and Law in the Roman World 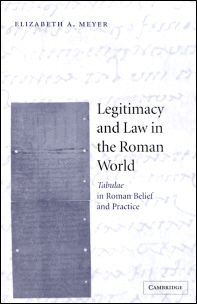 Everyone is aware of the different methods used by historians and jurists or, to be strictly accurate, of historians of Rome and Romanists. The Law of Antiquity - and specifically Roman Law - has its own method, conditioned by the interpretation of juridical texts and deeply indebted to the legal value that the Compilation of Justinian has had in the past. Unfortunately, in this sphere historical and social background is often passed over in favour of a purely technical perspective: this method is mainly focused on Roman jurisprudence - the so-called "Roman legal science" - and broadly speaking it consists in deciding whether a particular actio is appropriate to a certain case or whether an institution derives from Justinian law and, as a consequence of this, the texts related with it are interpolated by the compilers. [1] Since procedure constitutes the framework of Roman law and the work of jurists is its backbone, no one can raise any objection to this perspective. Indeed, this has practically been the sole interest of Romanists for many years. However, nowadays many Romanists are interested in the historical context of juridical institutions, and furthermore, historians attach increasing importance to law as a valuable document for understanding Roman history. Nevertheless, as is often the case, the most difficult factor is how the two methods may be co-ordinated to useful and creative effect. In this book, Elizabeth A. Meyer, who usually investigates Greek and Roman political history insofar as they are related to law, sets out to present an interdisciplinary study. The subject itself, as well as the perspective from which the author approaches it, is fascinating, complex and unorthodox: the material includes the study of literacy in the Roman World (Bowman, Beard), close to the magic and ritual elements of tabulae ceratae and, as an expression of older beliefs, their possible value as "authoritative legal texts", id est texts that create, modify or terminate a legally-recognised state of affairs. Moreover, this material is considered taking account of the theory of speech acts, citing a wealth of sources and adopting a very orderly approach. It should be said that one of the virtues of this book is its clarity, for in the introduction itself (1-7) Meyer boldly reveals her aims: to throw a "rope bridge over the chasm between the study of Roman history and the study of Roman law", since the independent evolution of these disciplines has left jurists and historians "inhabiting two practically irreconcilable mental worlds" (3). Following this, she declares that the starting point of her reflection on the use of tablets is the fact that during the Republic some legal acts, the ordering of state, legal procedure, magic and religion share "an ancient and ceremonial protocol in which writing on tabulae played an important part" (4). Meyer calls this protocol the "unitary act, because all of its many parts had to be accomplished" to be effective in the visible or invisible world. This power of unitary acts was, according to Meyer, assumed through history, and with different nuances, by laymen and even by some jurists. The structure of the book conforms to this starting point: part I (9-120) studies the power of tabulae - and their different types - in Roman society, particularly in the Republic. In this part the study is synchronic, whereas in part II the study is diachronic and covers the period from the first century to the reign of Justinian.

With the exception of some details that might be discussed, this book makes an important contribution to an interdisciplinary study. What distinguishes this work from others on similar subjects is the breadth of its scope. The focus of this study might cover a shorter period or take another angle, id est a specific kind of document and a specific problem such as posting, use in procedure, etc. However, the author underlines the importance of tablets in the Roman world and relates tablets with ritual and, as a consequence, explores every problem, both juridical and historical, over a long period of time (from archaic Rome to the Justinian era) and over a large area (examples from the entire Empire). Through this perspective, we are able to appreciate other facets of certain questions. Incidentally, Meyer refers to Hägerström in her conclusion: it is significant that Romanists have not been very understanding with respect to the theories of this exponent of "Scandinavian Realism" as it is known; Hägerström applied an arguably simplistic methodology to assess elements of magic in Roman law which, in many cases, were worthy of further study. [9] Obviously, as the author points out, jurists were working in a context of beliefs, but this assumption is difficult to demonstrate, because juridical texts set out these factual questions. Anyhow, in conclusion, I believe that Elizabeth Meyer has succeeded in interrelating very different aspects of Roman documentation, situating them in a framework in which laws are explained as part of a social context. This context - essential for us Romanists - is extremely difficult to understand if one starts from the pure categories of jurisprudence, which has tended to be the most frequent approach.

[2] Cf. Ludwig Mitteis: Reichsrecht und Volksrecht in den östlichen Provinzen des römischen Kaiserreichs, Leipzig 1891, 469-472, about IG 7.3172A, i.e. Nikareta's contract. This author believed in the possibility of dating dispositive documents in Ptolemaic Egypt. Even today it is possible to find this old theory among Romanists.

[5] The author follows the line taken by John Langshaw Austin and John Rogers Searle. The notion of "speech acts" includes "performative utterance" as speech acts performing the action that the sentence describes John Langshaw Austin: How to Do Things With Words, Oxford 1962 and John Rogers Searle: Speech Acts. An Essay in the Philosophy of Language, Cambridge 1970. Meyer (73, n. 2) explains her relationship with such thought, and points out its applications to Ancient Word and legal language. As Karl-Otto Apel observes (Die Logosauszeichnung der menschlichen Sprache. Die philosophische Tragweite der Sprechakttheorie, in: Hans-Georg Bosshardt (Ed.): Perspektiven auf Sprache, Berlin 1986, 35-87) Austin does not limit performative acts to social institutions: language also works as a metainstitution.

[6] Meyer refers to the studies of Maurice Bloch.