Elizabeth A. Meyer: Legitimacy and Law in the Roman World. Tabulae in Roman Belief and Practice, Cambridge: Cambridge University Press 2004 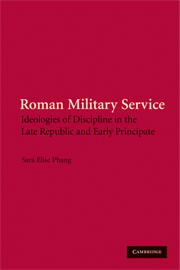 This book is a notable contribution to the increasing volume of literature on Roman army and precisely deals to a topic not recently developed in depth, that is the ideology that was the base of military discipline. One of the best aspects of Roman Military Service is its plural approach. After a general introduction (1-11), which includes a brief summary of the chapters, Phang in the first one, "Theorizing Disciplina: Social Conflict, Legitimation, and Power" (13-36) tackles the different points of view that a research into the nature of disciplina should have been taken into account. The methodological approaches range from classical theories (Weberian theory or the peculiar Marxist approach of Althusser or the more conventional of St. Croix) to Pierre Bourdieu's theory of power ('habit' as internalization of the principles, 'symbolic violence' etc.), including the not so common interpretations in this context such as the Julia Kristeva's theory of abjection. [1] These theories offer a useful framework to tackle a complex subject like discipline and its use as a legitimating ideology.

The second chapter ("Combat Training and Discipline", 37-72) evaluates the importance of physical fitness and combat skills as an element of discipline in the army and the conviction of the Romans that it was the main method to dominate other peoples. Vegetius is an important source in this sense and is profusely analysed in this chapter. Phang states that identifying mass formation and discipline is an anachronistic explanation, since we know very little about the former in Roman army. It seems that it was more open than today, but it is obvious that the use of "a phalanx-like or 'shield wall infantry" increased social control.

The third chapter is devoted to the military virtues in their "relatively static" aspect ("Viri Militares: Habitus and Discipline", 73-109): the wearing of armour, the attitudes of soldiers to their superiors ('modestia' as obedience). Armour is emphasized as a symbol of the burden of the empire in the case of the Emperor, by using -as the author does in other parts of the book- material excerpted form the Historia Augusta without special criticism, but in this case, as she ascertains, the anecdote is plausible as it is present -not literally, but in its meaning- in other sources (Dio Cas. 79 (78) 3. 2).

"Disciplina and Punishment" (11-151), the fourth chapter, is mainly focused on severity (including the hardest punishment, such as flogging or decimation) as a way of inculcating a habit of obedience. Phang points out that in Weberian terms punishment was never totally rationalized, since it depended on the Emperor or his commanders' will. I find especially interesting the debate among Severian jurists tackled by Phang regarding this question (147-150) because in this case punishment is treated with rationality, taking into account, for example, technical reasons which have to do with the frequent incidence of absence without leave (149): the context implies the "uncertainties of ancient travel" in order to appreciate whether a punishment is needed and to avoid damaging their own army, concern which includes the actual impact of absence or even desertion. Punishment for desertion, for example, is not as severe in peacetime (D. 49.16.15 Pap. 19 resp.) and personal circumstances are also borne in mind (D. 49.16.4.15 Men. 1 re mil).

Chapter five is entitled "Disciplining Wealth: The Ideologies of Stipendia and Donativa" (153-200) and tackles the control of the income of soldiers through discipline. Phang (153) rightly distinguish stipendia ("wage or salaries"), praemia ("pensions and other benefices") and donativa ("occasional gifts in cash", granted by the Emperor on important occasions such a triumph or a jubilee). As the author emphasizes, disciplina required that liberalities should be (in Weberian terms) 'routinized'. These grants are in some way consubstantial with a professional army, but paradoxically the elite admired the idealized image of a citizen army. Liberalities were interpreted as a consequence of discipline or in other words, discipline dignified them. Another contradictory element is the usual low pay, not very often raised, which entailed more dependence from imperial grants.

Labor Militaris: Work as Discipline" (201-247) includes a thorough study of what labour (Phang translated the Latin term 'labor' as 'toil') meant in the context of the Roman army, especially as a source of discipline and a way to achieve obedience to the benefit of the Roman Empire (Cic. Rep. II 30). The Roman moral and social standards, however, did not accept every kind of work because there was a subtle line between toil and slavery. Labor was contrasted to otium and according to military values the latter could be a source of indiscipline. Even away from military campaigns toil was required and as a consequence, the term 'virtus' in a way extended its meaning to tasks such as policing, building or even administrative work. [2] In this context the author takes advantage of theories of abjection (refusal to do traditional women's work) or points out the value of personal example, as it is the case with the commander's (or even the Emperor's) symbolic works.

The seventh and last chapter is focused on austerity ("Feast of Mass Destruction: Disciplina and Austerity", 249-284) and explores the social and ideological foundations of controlling soldiers' consumption, taking into account that feasting was a "mode of social power in the Roman world", which perhaps justifies the double standard applied to officers and soldiers. A simple diet was imposed on the latter in order to avoid that rapacity and luxury (both associated with meat) destroy self-contention and -in Bourdieu's terminology) the break of habitus (267-271). Also in this field the Emperor in campaign symbolically adopted the same life of his soldiers. A chapter of general conclusions, emphasizing the policy of routinizing discipline to achieve what Phang names "a protobureaucratic rationalization" (285) and also bearing in mind patrimonial and ideological elements, such as costumary rituals, closes this useful and lucid book.

[1] Julia Kristeva' s Pouvoirs de l'horreur. Essai sur l'abjection (Paris, 1980) is rightly related to the famous influential book by the British anthropologist Dame Mary Douglas: Purity and Danger, London 1966. As it is known, Kristeva takes advantage of Douglas' theory by describing abjection as an strategy of the psyche through which group identity are constituted by excluding anything that threats one's group's borders. Vid also -as the author points out- C. R. Whitakker: Rome and its Frontiers, London/New York 2004, 3-5.