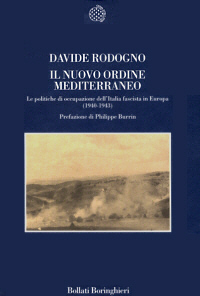 For twenty years the Fascist regime strove to make Italy feared. And as late as mid-1942, as Davide Rodogno notes, Mussolini was still demanding that "the commonplace that depicts the Italians as sentimental creatures incapable of being appropriately ruthless must cease" (405). Those familiar with the regime's military humiliations, its acquisition of a Balkan empire in 1941 through the efforts of the Wehrmacht, its lamentable final débâcle in 1942-3, and the world standard in murderous fanaticism set by its German ally, have not usually seen much ruthlessness. The stereotype of "Italiani brava gente", of amorous, feckless, and militarily incompetent Italian occupation troops in the Balkans and southern France caring for the native populations and protecting - where possible - the Jews, has had a long career. Apologists for Italy and contemptuous foreigners have concurred: "the Italians" were incapable of ruthlessness.

Il nuovo ordine mediterraneo is a largely successful assault on that received wisdom. Rodogno's book derives from research in insufficiently exploited Italian army and Foreign Ministry files. It argues that erecting an empire across Mediterranean Europe was a central purpose of Fascist regime, and that Italian conduct in the Balkan and French territories occupied through Hitler's victories was wholly consistent with that intent. Military failure and the parasitic character of Italian expansion rather than benevolence or restraint tempered - but only partially - the "Mediterranean New Order" of the Fascist state.

Rodogno develops his arguments through a series of thematic chapters on Italian foreign policy and the Axis alliance; Fascist imperial ideology; the discrepancies between imperial vision and the realities of 1940-43; Mussolini's role; the conduct and perceptions of the "conquistatori" in the occupied territories; Italian rule in occupied Croatia, Greece, and France; economic exploitation of the empire; forced Italianization in Slovenia, Dalmatia, and the Ionian islands; collaboration and anti-partisan warfare; and Italian policy toward refugees in general and Jews in particular.

Rodogno distinguishes the Fascist enterprise from that of its Nazi ally in one essential respect: Hitler and his followers sought lands freed of people - Jews and Gypsies in the first instance and Slavs in the foreseeable future - whereas Mussolini and his subordinates were willing to accept the continued existence of vassal peoples within Italy's coming comunità imperiale; Greece, for instance, was to live on shorn of many of its islands. The Fascist empire would ultimately resemble the domains of Imperial Japan, to be settled, alongside the conquered peoples, by a putatively racially superior imperial Volk, but without outright extermination of the vanquished.

Rodogno also aims to discern the mechanisms that governed Fascist imperial rule. He borrows freely from Max Weber and Ian Kershaw: the Duce ruled as capo carismatico, and his subordinates sought to do his will even without explicit instructions, in the same manner as German bureaucrats and activists, in the now-famous 1934 words of a mid-level Nazi, "im Sinne des Führers ihm entgegen ... arbeit[et]en". Mussolini maintained control by his command of the armed forces, by his domination of the foreign ministry, controlled by his son-in-law, Galeazzo Ciano, and by subordinating directly to himself key offices such as the governorship of Dalmatia. Rodogno's diplomats, bureaucrats and generals, far from moderating the Duce's radicalism, as many of them later claimed, consistently furthered his aims. Their devotion to their capo and their unceasing efforts ostensibly made the Fascist empire, until its collapse in 1943, notably more effective than previous scholarship has recognized.

Rodogno offers rich and innovative analysis of the often radical implementation of Fascist policy in the Balkans and southern France. The Fascist leaders, like their Nazi allies, saw in the occupied territories a field for developing methods - the ethnic and political remodeling of wide areas through the transfer, expulsion, or reeducation of populations - for later application to the homeland. The Italian army interned many thousands of Slovenes from the newly created "Province of Lubiana" in campi di concentramento; killed, wounded, or captured and in part executed up to 7,000 Slovene insurgents in summer-fall 1942; and expelled 13,500 ethnic Germans, whom the Reich was happy to accept. By 1942, as Rodogno exhaustively documents, the army was employing - as in Libya and Ethiopia in the interwar period - counter-insurgency techniques paralleling those of the Germans, above all the reprisal-murder of civilians and hostages. Rodogno also situates persuasively the greater tactical opportunism, compared to the Wehrmacht, of Italian policy toward the anti-Communist Chetnik guerrilla movement; Italian military weakness, not Italo-German discord over objectives, dictated Italian conduct in that instance.

The preeminent issue dividing the Axis in the Balkans was inevitably the "Jewish Question". Previous accounts have relied primarily on survivor testimony, charitable Italian memoirs, and German contemporary documents that sometimes interpret Italian policy as ideologically motivated "sabotage" of the "Final Solution". Rodogno suggests that Italy's alleged protection of Jews in Yugoslavia was nothing of the kind, but rather a byproduct of incessant friction over Italy's Balkan prerogatives between Italians on the one hand and Croats and Germans on the other. He backs up this radical view persuasively, using the Italian foreign ministry and army archives and the rich unpublished diary of the foreign ministry official most responsible for administering Italy's European empire, Luca Pietromarchi.

Italian officialdom initially failed to react to Croat massacres of Jews and Serbs in summer 1941; the minister in Zagreb, Raffaele Casertano, and even Pietromarchi were convinced that Italy should woo the Croat Ustasha regime away from the Germans - which meant tolerating mass murder on Italy's doorstep. The Italian army, however, resented Ustasha savagery because it threatened disorder throughout the Italian occupation area in western Croatia. It was the Regio Esercito's imperative need to safeguard its prestige as occupying power and its fury at Croat and German high-handedness that primarily motivated the belated and partial protection extended to Serbs and Jews. Subsequent Italian policy toward the Jews of the Balkans followed the same model; Italian officialdom expelled Jews from Italian or Italian-occupied territory to areas under Ustasha control, and even - in Albania - delivered some Jews directly to the Germans (440-3, 459) - while at the same time neglecting to hand over other (interned) Jews in conspicuous defiance of German wishes.

To the victims, the Italians may indeed have appeared uniquely humanitarian; Croats and Germans offered no competition in that regard. But as Rodogno documents, both the regime and the leaders of the Regio Esercito were convinced that a "Jewish Question" existed (482-4). Italian calculations centered throughout not on humanitarian concerns, but on maintaining visible autonomy from Italy's over-mighty ally and on upholding Italian prestigio in the eyes of the Balkan populations by keeping the promises of protection given in 1941. By early 1943, as German pressure on Mussolini to deliver the Jews in Italy's occupation areas intensified, many Italian officials had also realized that the Axis cause - or at least the cause of Fascist Italy - was doomed. Association with sending Jews to their deaths at Auschwitz was imprudent; a show of pity might constitute a long-term asset. And even if the regime chose cooperation with the Germans, the officer corps took the view that "we should at least avoid having the Italian army foul its hands directly ... with this affair" (247, 455-6).

Rodogno's impressive work inevitably has weaknesses. His account of Fascist foreign policy before 1940 leans heavily on Renzo De Felice's abiding - and untenable - conviction that Mussolini sought to avoid a European war, and entered Hitler's war in 1940 expecting not to fight; a position less congruent with Rodogno's insistence on Fascist imperial ruthlessness and radicalism is scarcely imaginable.

Rodogno's archival sources are in addition almost exclusively Italian; German material would have added depth and nuance, and Serbo-Croat and Greek sources might have inspired additional questions. Comparing Italian and German unit files on the Balkan anti-partisan war, for instance, might have brought into clearer focus the similarities and differences between the German and Italian version of the "New Order." Italian units executed "rebel" prisoners as a matter of course - yet the Italian theater commander in Yugoslavia, Mario Roatta, saw the need to hide his order to shoot partisans on capture in a confidential annex to his notorious counter-insurgency directives of March-April 1942. No such reticence ever distinguished his German opposite numbers. The exploits of General Franz Böhme, who served as Bevollmächtiger Kommandierender General in Serbien for a mere two months in autumn 1941, included the shooting of 20,000 to 30,000 civilians as hostages, suspects, or racial undesirables. And units under Böhme's command, such as the 342. Infanterie-Division, formed in early 1941 in western Germany and committed in Serbia that September, showed a remarkable naïve enthusiasm for recording murderous orders and "Sühnemassnahmen" proudly and meticulously in their war diaries.

Finally, Rodogno's analysis of Mussolini's role and technique of rule, and of the dynamics of the Fascist regime would have benefited from tighter focus on how the Duce made key decisions, on the precise interrelationship and meaning of key documents, and from more thought about the specifically Italian features of the process. Charisma may in part account for Mussolini's ascendancy up to 1940, but how much charisma - a quality, as Weber suggested, created by and dependent on success - could the capo have rescued from the Italian military débâcle of winter-spring 1940-41? And to what extent did Italian subordinates "work toward the Duce" in the absence both of the Prusso-German culture of individual initiative and of the bountiful rewards - unlimited promotions and lavish tax-free cash grants - that the Führer offered his followers for achievement in war and mass murder?

Il nuovo ordine mediterraneo nevertheless offers a generally persuasive and sustained analysis of little-known, poorly understood, yet vitally important chapters in the history of Fascist Italy and of the war that it willed - and in which it duly perished.

An earlier version of this review will appear in the Journal of Modern History 76:4 (2004)