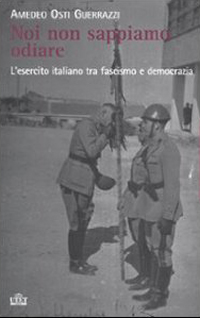 The title of this engagingly written work summarizes the denials of criminality and the excuses for military malpractice of the Italian officer corps during and after the Second World War. Field Marshal Giovanni Messe, past commander of the Italian Expeditionary Corps in Russia in 1941/42 and of 1st Italian Army in Tunisia in 1943, and future senator of the Democrazia Cristiana, uttered the phrase in British captivity, to his fellow-officers: "We are generous, we at bottom do not know how to hate [...] we are not a warrior people." (232) Those claims neatly encapsulated both the self-exculpation of Italy's military caste and the delusional character of postwar public memory of Italy's numerous wars of aggression.

Amedeo Osti Guerrazzi has taken aim with zeal and precision at an entire national mythology - on the basis of novel sources. Britain's wartime intelligence services provided selected prisoners of war with ample leisure to gossip among themselves - while secret listeners recorded and transcribed comments of interest. And in recent years a large-scale German and international historical project copied and coded the resulting 50,000 pages of transcripts into a database for systematic exploitation; Osti Guerrazzi provided the expert evaluation of the Italian materials.

The results are stunning. The transcripts offer unique snapshots both of fleeting reactions to events and of underlying attitudes that are largely absent from the surviving contemporary documents, and forgotten or suppressed in diaries and memoirs. [1] Osti Guerrazzi has grouped his material, which derives primarily from Italian officers captured in Africa and Sicily between November 1942 and July 1943, into a series of topical chapters: sources and protagonists; life as a prisoner-of-war; attitudes toward the Fascist movement and regime; the army and the monarchy; Italy's preparations for war and military operations in 1940-43; the feared and admired ally, "motorized descendants of Attila" (6, 204); Italian war crimes; and the prisoners' speculations on their own future prospects and on those of Italy.

Attitudes toward the regime figure prominently in the transcripts, which discredit beyond redemption the many later protestations that the army was an innocent victim of Fascism. Messe's 1943 verdict was representative: a "regenerative movement that soiled itself later along the road" (70; 71, 74). Fascist ideology was existentially indispensable: "Once the Fascist idea is removed, the Communist one appears" (78). The officers even regarded the black-shirted Fascist Militia, a favorite whipping-boy in virtually all post-war military memoirs, as vitally necessary to "hold back the masses from revolution" (77, 97). And while in retrospect savagely critical of the foreign policy and military strategy that had brought disaster upon Italy, the officers did not wholly repudiate Mussolini until his reemergence in September 1943 as a German puppet (69, 79-82). Conversely, and despite the Royal Italian Army's institutional link to the monarchy, King Victor Emanuel III figures only fleetingly in the transcripts until Mussolini's July 1943 dismissal - and thereafter primarily for the botched armistice and cowardly flight from Rome that moved the captive officers to vociferous perplexity, dismay, and contempt. As Osti Guerrazzi points out, those outbursts make the army's ready acceptance of the Italian republic in 1946 far more understandable than hitherto.

The transcripts are however most eloquent on the officer corps view of Italy's preparations for war, strategy and operations, and relations with the German ally. In two mutually contradictory ways: on the one hand the generals' post-war excuses for defeat, first of all Mussolini's ostensible failure to listen to expert military advice (64, 141), are all on parade; parallels to the postwar fantasies of Hitler's field marshals are obvious. On the other, the transcripts reveal an uneasy consciousness, later usually repressed, of the intrinsic lamentable inadequacies of Italian military institutions and military culture. In this connection, the German ally performed a dual function, as scapegoat for catastrophe and negative example devoid of purported Italian virtues such as "umanità" and political astuteness, and as a gold standard of military effectiveness far beyond the Royal Army's reach. In the postwar world, as Osti Guerrazzi points out, the first model prevailed - and Italian (but not German) war crimes in Russia and the Balkans simply vanished from memory. Nor do they appear to any extent in the transcripts, although the captives included General Taddeo Orlando, who had ordered the shooting of Balkan prisoners of war and civilians with scarcely less restraint than his German allies. Along with Messe, Orlando and others were soon released by the British, and enjoyed brilliant careers in post-1943 Italy - as well as immunity from extradition to Yugoslavia. The transcribed remarks also show remarkable prescience about Italy's future role as a very junior partner in an anti-Soviet Western alliance, even if the generals failed - from a characteristic parochialism of outlook - to anticipate the hegemonic role of the United States.

The only mild reproach one might direct at the author regards his explanatory framework. Osti Guerrazzi follows Renzo De Felice (105-106, 110) in arguing that the attitudes of the officer corps merely reflected its position as part of the pre-1922 classe dirigente that had accepted and served the regime; a viscerally anti-Communist "shared culture [cultura condivisa]" (54, 63, 82) thus united the armed forces and Fascism. But that partial identity of attitudes and aims does not explain the most salient and peculiar feature of Italy's role in the Second World War, the specifically military-institutional ineptitude, extraordinary tactical and operational inadequacies, and widespread corruption within the armed forces themselves that the captive officers freely if bitterly admitted in conversation, and which the troops widely perceived (143, 208-209, 211-212, 223-225). Osti Guerrazzi apparently considers these phenomena a result of "moral disintegration of the entire Italian ruling class [...] after twenty years of fascism" (156, 158-167). But that judgment bears unfortunate resemblance to the generals' efforts to blame their own inadequacies on the regime. Closer analysis of the abiding features of the Italian military culture that the royal army brought to Fascism in 1922 - and from which much of Fascism itself derived - might be suggestive. Were the gaps in training, tactical and operational skill, initiative, professionalism, and ability to motivate the troops by example between the average German officer and his Italian counterparts in 1940-43 really the sole responsibility of Mussolini and his regime? [3] Regardless, Noi non possiamo odiare offers a splendid sustained refutation of the deeply rooted myth that the Italian people and armed forces numbered among the good guys - "italiani brava gente" - of the Second World War.

[2] For both theory and application, see the fundamental work of Isabel V. Hull: Absolute Destruction: Military Culture and the Practices of War in Imperial Germany, Ithaca/NY 2004.