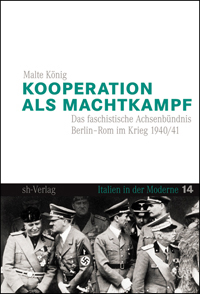 This former doctoral thesis rests on extensive research in German archives and on archival soundings in Italy, Britain, and the United States. At its best it provides a multi-dimensional analysis of some aspects of the Axis alliance in 1941/41, and of the mutual perceptions of the elites and peoples on both sides of the Alps. But difficulties in question-framing, perspective, source base, and topical and chronological coverage also suggest that it represents a noteworthy missed opportunity.

In his introduction König proclaims as his chief purpose the filling of a perceived gap in the literature, and proposes to fill it by analyzing the extent to which Mussolini's débâcle in Greece altered the internal dynamics of the alliance and the relationship between the two dictatorships (13-14). He structures the book into seven topical chapters covering Italo-German cooperation and conflict in key areas: the military alliance; armaments production and economic relations; press and radio; Balkan occupation policy; the former South Tyrol and Italy's surreptitious efforts to fortify its German frontiers; Italians in Germany (as workers) and Germans in Italy (as soldiers); and the attitudes on both sides of the Alps toward the alliance, as revealed in the flood of rumors and recriminations that accompanied Italy's military failures and Germany's Balkan and Mediterranean successes.

The overriding difficulty with this approach is that a cross-section or snapshot confined to 1940-41 cannot do justice to longer-term issues and causal forces central to the alliance. Worse still, what others have or have not written about the narrow chronological band König has chosen to explore appears to constitute the author's primary frame of reference. No effort to tie the analysis to a broader understanding of the historical trajectories of the two nations and regimes is perceptible. Perhaps in consequence the necessary effort to explain in an original way why things happened as they did and not otherwise is largely lacking. Understanding the workings of the alliance - even in 1940/41 - requires incisive treatment, however brief, both of its origins and of what the dictators, their principal subordinates, and their key institutions saw in it, and sought from it.

In the absence of a structured explanation of the prehistory of the Axis alliance and of the objectives that each dictator pursued through it, central issues appear seemingly at random. Not until page 201 does the reader learn that the Germans had promised in spring 1939 to respect Fascist Italy's Mediterranean-Balkan "spazio vitale" - an undertaking clearly consigned by 1941 to the Wilhelmstrasse's extensive collection of broken agreements. A broader frame of reference might have also helped to analyze phenomena such as Hitler's dogged insistence - despite the pressures of other fronts, the perceived strategic, operational, and tactical incompetence of the Italians, and the skepticism of many of his principal subordinates - on shoring up Fascist Italy's war effort. That insistence only comes into focus briefly in König's conclusion (331-332). But Hitler had sought an Italian alliance from the beginning of his career, and its achievement in 1936 to 1939 tied German power and prestige to Fascist Italy's fate. Hence the Führer's notable concern, amply on display in 1943, over the potential damage that Italian collapse might inflict upon his own charisma, domestic prestige, and control over the German armed forces. The sources of Hitler's well-founded mistrust of the Italian monarchy and of key Mussolini subordinates such as the foreign minister and heir-apparent, Count Galeazzo Ciano, also remain mysterious; König seems unaware of German interception of Ciano's winter 1939 to 1940 indiscretions to the Belgians and Dutch about Germany's impending western offensive. On the Italian side, König appears to ascribe Mussolini's option for war alongside Germany in 1939 to 1940 largely to the economic pressures of the moment (93-96, 328) - a stance that even a Marxist might condemn as "economism" in view of Mussolini's relentless quest since 1919 for a great ally similarly committed to overthrowing the post-1918 world order.

The author's source base is also far too narrow for accuracy. König uses only six rolls out of over five hundred contained in the easily accessible and vitally important U.S. National Archives microfilm collection of Italian army and high command documents captured in 1943 to 1945. He does not refer, in his discussion of Italy's military-economic embarrassment in winter 1939 to 1940, to the rich British foreign office and cabinet documents, which might have thrown Mussolini's obduracy in clinging to the Axis into sharper relief. König's command of the Italian secondary literature is also sketchy. On the basis of contemporary German sources (124-125) he credits the Italians with nefarious schemes to pirate German tank designs; in actuality the German high command appears to have offered the Panzerkampfwagen III design freely and seems to have wanted to see German tanks produced in Italy - but Italian industry was perversely wedded to its own combat-ineffective but more lucrative machines. [1] König also fails to define clearly the precedents and final objectives on both sides in the uneasy joint occupation of the Balkans. As a result, his discussion of occupation policy lacks perspective and direction.

The military core of the Axis alliance comes up shortest in König's analysis. He focuses on the high commands, but without breaking new conceptual or substantive ground, or exploring the tactical and operational levels at which Italian performance and German condescension explain so much about the alliance's nature and fate. Insofar as König's chapter on military cooperation has a purpose, it is to test the extent to which Italy preserved some small degree of freedom of movement within the alliance after its initial Balkan, Mediterranean, and North African disasters, and its subsequent desperate pleas for immediate military and economic aid from Berlin. König claims that Italy after December 1940 to January 1941 was not a "satellite". But from that point onward only Hitler's insistence on saving the Duce's prestige imperfectly masked German domination of all essential strategic and operational decisions, and Italy's total military-economic dependence on the Reich. Any residual power within the alliance that Italy possessed depended on an increasingly overt threat to collapse. That threat, characteristic of client states and often notably effective, was hardly evidence of Italian freedom. Inexplicably, the author also mentions only in passing, in connection with public opinion, the one genuinely significant Italian strategic initiative from 1941 onward, Mussolini's harebrained insistence, to Berlin's initial embarrassment, on joining Germany's war of annihilation against Soviet Russia. König is indeed correct in suggesting that the history of the Axis alliance is worthy of further investigation. But this work lacks the necessary breadth, depth, and conceptual imagination.