Elisabeth A. Fraser: Delacroix, Art and Patrimony in Post-Revolutionary France 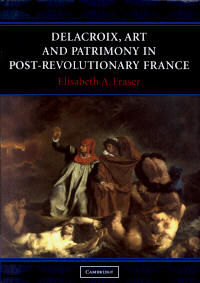 In her book, "Delacroix, Art and Patrimony in Post-Revolutionary France", (Cambridge University Press, 2004), Elisabeth Fraser looks at certain paintings created by Eugène Delacroix during the years of the Bourbon Restoration (1814-1830) through the lens of concepts central to Restoration culture, such as the family, patrimony, and patriarchal authority, an approach derived from recent historical studies about early modern France by leading historians including Michelle Perrot and Lynn Hunt, among others. [1] According to Fraser, what links Delacroix's art and Restoration culture is the manifest centrality of the familial metaphor in both, as artistic subtext and political emblem. The Restoration with its reinstatement of the monarchy and of a paternalistic royal authority in the person of Louis XVIII. was perceived by many as the exact inversion of 1789 which had brought about the cancellation of fatherly authority symbolically enacted in the execution of Louis XVI., elder brother to the new monarch. Yet this reinstatement of a head of state as father figure was fraught with ambivalence. Contested by the liberal opposition, it was consistently underwritten by the conservative Bourbon regime.

Fraser situates the formation of Delacroix's artistic persona and the making of his early groundbreaking works within this ambivalence, establishing parallels between the way the Bourbon regime (and the opposition to it) negotiated issues of monarchical identity, historical lineage, and legitimacy; Delacroix's efforts to address his own (patrilineal) artistic legacy; and the meaning and reception of his paintings in that context. As she puts it: "In general my argument will be that his art is implicated in the major issues of the Bourbon Restoration and, in particular, that it is implicated in the Restoration's negotiation of its relationship to Revolutionary culture. I argue that a central feature of this negotiation is the charged issue of patrimony and the problems of history, lineage, and authority that underlie it. A concern with family and lineage links Delacroix, whose art traces his genealogy as a painter, and the restored monarch, who must establish his legitimacy after the French Revolution and the Napoleonic Empire." (2).

The four chapters of the book implement this thesis. Three of them are monographic studies centering on major Delacroix paintings that span the period: "Dante and Virgil" (1822); "Massacres of Chios" (1824); and "Death of Sardanapalus" (1827). One chapter (Chapter Three) deals with art patronage. Chapter One establishes a parallel between Delacroix's familial history, his contested paternity (was he the son of his own most probably impotent father, Charles Delacroix, or, rather, of his mother's putative lover, the notorious statesman Maurice de Talleyrand?) and the royal regime's contested patriarchal authority, at once accepted and challenged. It argues that Delacroix's breakthrough painting at the Salon of 1822, "Dante and Virgil", represents a visual quest for such paternal authority, albeit cast in artistic terms. In so doing, Delacroix rejects the model of the nearly defunct classical school and opts instead for older masters as mentors, especially those whose virile manner stood in counterpoint with the feminized classicism of the day. Delacroix's artistic "fathers" thus included Dante, author of the painting's textual source and one of its key figures, and Michelangelo who inspired its formal treatment.

Chapter Two reads "Massacres of Chios", exhibited at the Salon of 1824, as literally incorporating the family as conceptual and visual structuring device. Equating patriarchal family metaphor with government paternalism and imperialist protectionism, the chapter argues that such familial intimations, heightened by acute emotionalism and hints of a Western culture soiled by Eastern penetration, corresponded to and reflected a paternalistic government urge to protect the victimized Greeks, a thinly veiled justification for French colonial intervention in the Mediterranean. The argument, attractive as it may be, nevertheless raises a number of questions: For instance, one is bound to wonder how else but as dramatic and emotion-laden could such scenes of savage annihilation be represented? And should such representations necessarily imply colonial intervention mascarading as humanitarian assistance (Should one, by analogy, regard the recent highly dramatic and emotive media coverage of the tsunami holocaust in South East Asia, and the world aid proffered in response, as underpinned by secret imperialist schemes?)? One also wonders how "Chios", created between 1822 and 1824, that is under the reign of Louis XVIII., could be impregnated with such notions of imperialism at a time when the French regime vehemently resisted all involvement in the "affairs of Greece". And contrary to the author's assertion of a public opinion consensus in 1824 over the Greek war fostered by the underlying colonial project, the reality is that political polarization over Greece reached an all-time high that year, exacerbated by the advent on the throne of the Ultra-royalist Charles X. Even before the Salon closed, the Greek cause was viewed by conservatives as entirely a matter of liberal propaganda, as parliamentary debates over possible Greek aid make plenty evident ("everyone in opposition to the court was a philhellene [...] the government was working against the Greeks, though professing to befriend them," wrote the comtesse de Boigne). Imperialism only reared its ugly head in the latter years of the Restoration, when, in 1827, Charles X., who was to launch the Algerian conquest as well, joined the Allied Powers in a military attack on Turkey in support of Greece (mostly as diversion from a rapidly deteriorating political situation at home), and followed up with a military expedition in the Morea, complete with scientific contingent assigned to study and record the new territory , modeled after Napoleon's Egyptian campaign.

Chapter Three broaches the subject of state patronage as political tool in the assertion of paternal monarchical authority, an authority challenged by a dynamic set of private collectors some of whom also actively contested the monarchy's legitimacy. The argument hinges on the history of the purchase of "Chios" by the state, a history whose irregular and peculiar character Fraser admirably documents through unpublished archival materials. In that regard, paternalistic royal authority (of Louis XVIII.'s regime) appears as the target of attack from both within and outside official parameters. For as the author demonstrates the purchase of Delacroix's painting was negotiated without the king's traditional approval and as part of a defensive strategy devised by the director of royal museums, the comte de Forbin, to safeguard government cultural dignity in the face of rival private patronage, primarily that of Louis XVIII.'s cousin, Louis-Philippe duc d'Orléans, leader of the liberal opposition and a pretender to the French throne (to which he ascended in 1830). Fraser convincingly sees such rival patronage as part of the oppositional tactics of what Jürgen Habermas has called a "civil society", a societal and cultural sphere in contrapuntal resistance to royal authority and "the source of an alternative public and art" (111). She spells out the ties of Delacroix to that public - the duc d'Orléans was his patron and will remain so under the July Monarchy - although how the paternalistic and imperialist "Chios" of the previous chapter may relate to the potentially oppositional "civil society" "Chios" of this chapter is a topic never fully developed here.

The final chapter is a study of "The Death of Sardanapalus", Delacroix's controversial submission to the last Restoration Salon of 1827-28. Invoking Restoration political dissent against royal authority as targeting primarily and symbolically the royal body - especially that of Louis XVIII.'s grotesquely overweight and inclined much like Sardanapalus to material overindulgence - as metaphor for governmental and personal corruption, Fraser argues that the perceived disorder of Delacroix's formal treatment of his painting as much as the disorderly life and corrupt persona of the featured Assyrian king Sardanapalus evoked "a corresponding disarray in the French royal household" (121) thereby accounting for the painting's incendiary message. The materials are enticing and make for a largely convincing argument. Yet once again one is compelled to ask why a picture created well into the reign of (the ascetically thin and pious, albeit one time lecher, it is true) Charles X. might draw most of its immediate royal references and visual rhetoric from that of the long-defunct (corpulent and gouty) Louis XVIII.?

"Delacroix. Art and Patrimony in Post-Revolutionary France" makes a useful contribution to art historical readings about Restoration art and culture through its methodological framework informed by recent theoretical historical studies that highlight the prominence of the concepts of "family" and "patrimony" during that period (and throughout the French nineteenth century, for that matter). Yet that same innovative framework at times proves stifling, occasionally forcing interpretations to a breaking point and tailoring material evidence in order to support them. Most valuably, the book proposes a multifaceted analytical model for understanding the relation of Delacroix's art with its cultural context, a relation that fluctuated and shifted, and could accommodate contradictory notions of authority and opposition all in one.

[1] Examples of such writings include: Lynn Hunt, The Family Romance of the French Revolution, Berkeley: University of California Press, 1992; Michelle Perrot, A History of Private Life, vol. 4: From the Fires of the Revolution to the Great War, Cambridge and London: Harvard University Press, 1990.