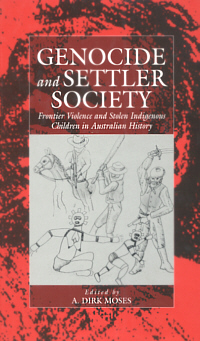 The recent campaign in the Australian media to deny the genocide of Australia's Indigenous peoples makes the appearance of this book important and timely. While this is not the first book to consider the possibility of genocide in colonial Australia, it is certainly the first to seriously invite comparison with the colonial policies and practices of the Third Reich. On these grounds alone, this is a confronting text for Australian scholars. But the real strength of this book lies in the way Moses juxtaposes the reluctance of most Australian contributors to consider genocide beyond the UN Convention definition with his own approach which places genocide within in a colonial settler framework.

In applying the UN Convention definition to the letter, four Australian contributors: Raymond Evans and Pamela Lukin Watson in their case studies of two different areas of the Queensland colonial frontier: and Robert Manne and Anna Haebich in their cases studies of the "absorption" policy in Western Australia in the early 20th century conclude that genocide was openly practiced.

Three other contributors, Henry Reynolds on the colonial frontier in Tasmania, Paul Bartrop in his comparative study of the Warrigal Creek massacre in Gippsland with the Sand Creek Massacre in Colorado in the United States, and Russell McGregor in his analysis of the assimilation policy from 1945 to 1970, firmly argue that genocide did not take place.

In many respects, these chapters represent a mighty step forward in the genocide debate in Australia. But the reluctance to move beyond the UN convention definition of genocide is demonstrated by the inclusion of two comparative chapters on the Nazi colonization of Eastern Europe by two very fine German historians, Jürgen Zimmerer on the German war against Poland and the USSR and Isabel Heinemann on the kidnapping of "Racially Valuable Children" in Occupied Eastern Europe. They reveal disturbing parallels with Australia, in particular the ideology of racial superiority; the ruthless policy to remove the original inhabitants from their country; and the complete and utter disregard for the rights of children removed from their parents. After reading these chapters, the question remains: How is it that so many Australian historians are reluctant to consider that genocide took place in Australia?

Moses calls this reluctance the "Gorgon effect" - the freezing of the imagination - for fear of discovering genocide. He considers that this may be due to the fact that Australia was a colony of Great Britain - the largest of the modern empires - which was at once an implacable opponent of totalitarianism and the source of those settlers who swept aside millions of Indigenous peoples to establish progressive democracies in North America, New Zealand and Australia. As "bulwarks of liberty", Moses contends, "Britain and its former colonies have blood on their hands" (5).

According to Moses, Australian historians have operated under the misconception that genocide entailed the state's intention to exterminate all Aboriginal people, when there was clearly no policy to do so and that if we used "genocide" at all, they did so as a synonym for "extirpation" or "extermination", reflecting the rhetoric of the sources. He points out that the UN Convention definition of genocide is located within the perpetrator / intentionalist paradigm which "is really a species of totalitarian theory. It is not equipped with the intellectual tools to consider the issues raised by colonialism" (26). He urges Australian historians to read the published and unpublished writings of Raphael Lemkin who formulated the term, to gain a clearer understanding of its meaning.

Lemkin argues that genocide is not only about the state as perpetrator but that it also has a structuralist paradigm. The latter "averts the issue of perpetrator agency of intention by highlighting anonymous 'genocidal processes' of cultural and physical destruction. Both have important implications for the relationship between genocide and colonialism" (23). Within the colonial context, the structuralist paradigm also has to address "intended" genocide and "accidental" genocide. To overcome these conceptual problems, Moses offers a new paradigm to explore the impact of settler colonialism on Indigenous peoples.

The first is the colonizing project itself. Moses argues that most policy makers and analysts in the Colonial Office in London knew exactly what the intentions and outcomes of settler colonialism were, the extinction of the Indigenous peoples. "Where genocide was not consciously willed, then it was implicitly intended in the sense of the silent condoning, sometimes agonized acceptance, of a chain of events for which they were co-responsible and were not prepared to rupture" (30). This suggests that the British colonial states did not stand by neutrally as the settlers had their way with the Indigenous peoples.

The third concerns genocidal moments. Moses argues that the deep structure of settler society and the inherent character of the British occupation of Australia necessarily entailed a large-scale attack on Aboriginal society even if death was not the aim. When Aborigines resisted pastoral expansion governments in the metropolis came under intense pressure from the frontier periphery to entertain "final solutions" to the "Aboriginal problem".

Moses suggests that a settler society paradigm could be a useful way of exploring and analyzing the genocide concept in Australia. While he is not arguing that the history of Australia can be reduced to genocide, neither is it possible to regard the country's genocidal moments "in the manner of an industrial accident". For they continue as part of the colonization process today, in reaction to native title and in denial of frontier conflict.

In exposing the conceptual problems some Australian historians confront in considering the vexed issue of genocide and their reluctance to move beyond the UN definition, Moses makes a significant contribution to Australian historiography. In offering a new paradigm to consider genocide in Australian history however he takes the debate in Australia into new territory by reframing the way historians can address the two key issues that lie at the heart of the history wars: Aboriginal reconciliation and the moral legitimacy of the Australian state. This is a mighty achievement.