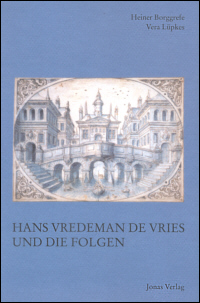 Often the significance of an exhibition emerges from its results. In this case the lasting knowledge, gained from an international exhibition devoted to Hans Vredeman de Vries at both Antwerp and Lemgo [1] also emerged from a subsequent scholarly symposium (Schloss Brake, Weserrenaissance-Museum, 2004), the basis of this volume of essays. Even more often the true significance of an artist emerges from his influence. In the case of Hans Vredeman de Vries, the "Flemish Vitruvius", proof of the artist's wide-ranging significance can be seen in his lasting effects on both art and architecture extending from the Low Countries across to the distant Baltic. This volume, comprising twenty-five essays, thus also spans language regions as broad as Northern Europe itself and appropriately includes leading scholars, spanning the United States to Estonia and the Czech Republic.

Hans Vredeman de Vries (1527-1606) seems only now to be achieving his deserved renown. His complete prints were only definitively compiled for the Hollstein reference work by Peter Fuhring in 1997. Vredeman's contribution was to compile and disseminate many of the finest earlier architectural writings of Serlio and Vitruvius, particularly regarding the classical orders, and he provided his own rigorous commitment to both perspective and architectural design, including garden design. His vast influence resulted from published pattern books, which also included ornament work in the latest fashions of strapwork and grotesques. Vredeman was also a notable painter, and his large-scale pictures of plausible but imagined building spaces, chiefly palace loggie and Gothic church interiors, is regarded as the fountainhead of a century of Netherlandish architectural painting on both sides of the Scheldt. Though first based in Mechelen and Antwerp, he traveled widely and offered his talents as a designer of fortifications or civic buildings at such locations as Wolfenbüttel, Hamburg, and Gdansk, plus imperial Prague, among other centers. Their absence today obscures one of his main design contributions, and his wall paintings in Antwerp's City Hall council chamber are also lost. Some of the vast influence of Hans Vredeman de Vries was already taken up in the initial 2002 catalogue. In particular Fuhring discussed the ornament prints as models, and Barbara Uppenkamp discussed how Vredeman's architectural patterns found realization in both buildings and decoration from Leiden across the Baltic to Gdansk and Riga, but even to the Spanish colonies, linked to Habsburg Antwerp.

These various contributions are examined further in the current volume of essays. To gain a sense of perspective on the sudden explosion of "Vredemania", the interested reader should begin with the overview of the artist by Thomas DaCosta Kaufmann, which also suggests directions for further research (28-36). Appropriately, Kaufmann's recent essay, "Identity in Artistic Geography?" (1997; reprint 2004) was one of the first to point to Baltic regional adoptions of Netherlandish models, to which Vredeman and sculptor Adriaen de Vries (subject of another recent exhibition, 1999) were leading contributors. For the wider significance of Vredeman to the emerging Netherlandish architectural painting, Walter Liedtke's opening essay (13-27) sketches this essential relationship, long acknowledged by scholars but still rarely examined.

Beyond his own creations extend Hans Vredeman de Vries's considerable influence, conveyed best simply by the list of those essays in this volume dealing with various media and geographical regions. For the emerging genre of Flemish church interiors, his example led to works by the Steenwyck family (Jeremy Howarth), as well as spaces of Bartholomeus van Bassen (Axel Rüger) and the Neefs family (Thomas Fusenig). In English architecture his ornament prevailed (Anthony Wells-Cole), while in Denmark many more patterns were adopted (Hugo Johannsen), including sarcophagus and monument design in the Renaissance style. In Estonia Vredeman was followed closely in the proper use of classical orders by designer Arent Passer (Krista Kodres). Tomb monuments in Bohemia, including the noted Lobkowitz monument in St. Vitus Cathedral Prague, derive from Vredeman (Ivan Muchka), and in Silesia both paintings as well as architecture and epitaphs echoed his inventions (Piotr Oszczanowski). In Hamburg's St. Petri church the aedicule crown draws on Vredeman patterns (Barbara Uppenkamp, David Klemm), and in Gdansk's Rathaus ceiling decoration by Isaac van den Blocke, "The Apotheosis of Danzig", starts from Vredeman's ceremonial designs (Sergiusz Michalski), as do some ceiling paintings with gardens in Saxony (Angelica Dülberg). Finally, Christine Fritsch-Hammes discusses the 1631 vernacular publication, Architectura moderna (Amsterdam), focusing chiefly on Hendrick de Keyser (d. 1621), as the ultimate outgrowth, sometimes in reaction, from Vredeman's heritage, helping to form "modern Dutch" identity.

Like the essay by Heiner Borggrefe in the 2002 catalogue, perhaps the most challenging and provocative essays engage with interpretations of meaning in Vredeman's images and their emulators. First among these, Lubomir Konečny, analyzing a Hondius print set after Paul Vredeman de Vries, links the five architectural orders with allegorical figures to the suites of Five Senses, with Sight and the Tuscan order as the simplest and most noble category, anticipating the kinds of links later proposed for classical "modes" by Poussin. In similar fashion, Michael Gnehm (echoing Panofsky on Vasari) considers the artist's sophisticated consciousness in his designs of the divergent possibilities and decorum of using either "Gothic" or "Renaissance" or mixed forms. He also calls attention to allegorized orders, tied to the ages of mankind or the four elements as well as the five senses. Two further essays link Vredeman to religious imagery. David Kunzle analyzes his 1570 Massacre by the Roman Triumvirate (Tarbes) in relation to the contemporary French Wars of Religion, linking Vredeman's Protestant faith to his complaint of the abuse of power by Spanish and French royalty while also juxtaposing it to Antoine Caron's 1566 royalist version (Louvre) of the same theme. Frank Muller focuses on a Calvinist allegory of Law and Grace (1596; Gdansk) by Vredeman as well as other religious works, including church interiors that emphasize preaching and baptism.

Today Hans Vredeman de Vries has finally attained the scholarly recognition that until recently remained the province only of specialists. Together with essays in the 2002 exhibition catalogue, this new volume of shorter, more focused studies confirms not only his personal contributions in the fields of architecture, graphics, and painting but also his lasting influence and legacy for both Netherlandish and wider European art at the turn of the seventeenth century.