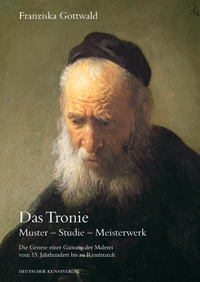 Hovering somewhere between the bust-length format of portraiture and the emphasis on unidentifiable yet seemingly narrative character heads, young or old, dressed in picturesque or exotic costume (turbans, armor), the pictorial category of tronie seems to fall between stools. Rarely is it clear whether any live model sat for such a picture, though certain favored faces often reappear in the works by a single artist. Often such works are painted with a sketchy, broad brushwork and present informal poses in isolation, many with averted gazes. The tronie was a favorite form for small-scale study heads by Rembrandt, especially in his formative years, and it is towards Rembrandt that this new study climaxes. Based on her Berlin dissertation, Franziska Gottwald seeks out the prehistory of the tronie before Rembrandt, then she dedicates a long, concluding chapter to Leiden works produced by Jan Lievens and Rembrandt.

Gottwald certainly is not the first to address this important art form: recently a number of studies, including an article on Rembrandt's use of the form and a book were produced by Dagmar Hirschfelder. [1] But Hirschfelder attends almost exclusively to the 17th-century tronie in Holland, to the neglect of the broad base of this form in the studio practices of both Renaissance Italy and those Italian-oriented painters of Antwerp, Frans Floris and Peter Paul Rubens (though a couple of tronies by Pieter Bruegel fail to appear for discussion).

Certainly frequently used character heads, such as Christ or the Virgin, were featured in late medieval model books, such as the Bohemian example of ca. 1400 (p. 29, fig. 2). Drawn heads by Leonardo and Raphael as well as chalk or oil studies by Barocci provide strong Italian antecedents for workshop practice, adopted as modelli by both Floris and Rubens. But those preliminary studies transformed into the Dutch independent heads in oil, true tronies, in the hands of the Leiden studio partners of the 1620s, led by Lievens but given added narrative resonance or pictorial finish by Rembrandt. Ultimately this development culminates in a series of enlivened but conventionally idealized heads of Christ by Rembrandt, which Gottwald discusses - as more likely still modelli, to be distinguished from proper tronies - in the catalogue of a current exhibition. [2]

But this special case of a larger phenomenon shows just how porous are the boundaries of tronies as a pictorial category - a recent one at that within Dutch art history, as Gottwald's state of research makes clear. The question of whether or not a model sat for the image is never easy to determine, since artists have favorite types that they readily repeat-Leonardo's drawings of old men with nutcracker chins offer a ready example; and Rembrandt's intensely wrinkled old man was used so often that 19th-century scholars assumed that he was the artist's own father. And if a potential tronie does get used in a later painting, must that fact disqualify it from this designation? Must a tronie follow rather than precede a role in a history painting, like an Andachtsbild that is removed from a larger religious narrative, as Kurt Bauch asserted about the young Rembrandt? [3] Rembrandt's turbaned figures often do reappear in his biblical narratives, but they never served for exact workshop replication like Barocci's or Rubens's study heads. And what are we to make of those exotically costumed heads with identifiable self-portraits by Rembrandt? [4]

Not all workshops operated with identical, predictably academic production processes. Nor can we determine clearly whether any painting in question was sold or kept. One also wonders about the designation of Fragonard's later portraits de fantaisie, which have never been considered in relation to tronies. [5] Unlike Hirschfelder, or perhaps because that book has already been written, Gottwald stops her analysis at Rembrandt.

In her brief second chapter, Gottwald helpfully inspects Netherlandish theory by van Mander (1604) and Junius (1637) to note that the affetti, so prized in body gestures of Italian Renaissance art, were meant to be conveyed in Northern imagery more through facial expression. She finds the origins of tronies in Chapter Three in the heritage of the modelbook distillation of heads out of religious narratives, translated into the cartone of standardized and replicable individual heads in the Italian painting workshop. This survey is continued in her fourth chapter by necessary discussion of "individual and idealized" painted heads - on panel - by Floris and (less idealized, for Counter Reformation holy figures) by Rubens, completing the antecedents of tronies neglected by Hirschfelder. This material, especially Floris, has largely been neglected by current scholarship, even in the recent London exhibition [6], so it comes as a welcome, serious analysis, in part for demonstrating the links to Italy for these heads but, more importantly, for demonstrating the links between them, from Floris to Rubens (though she also emphasizes the influence of Italy, including Caravaggio).

From Rubens the crucial link to Lievens in Leiden followed directly. Chapter Five explores the development of "autonomous tronies" by Lievens (as early as 1623) and (only) then Rembrandt, but Gottwald also introduces similar Haarlem experiments by Pieter de Grebber. She underscores the decisively new middle position that defines these tronies between history painting and portraiture as well as their figure's anonymity. When Rembrandt took up the task in 1627, he underscored the facial drama of the figure, achieved by both painters through their Caravaggesque emphasis on effects of deep shadows. These precise elements answered the calls by van Mander and Junius and also were already recognized as defining each artist, as noted by Constantijn Huygens in his famous contrasting description of them (c. 1630; p. 123). [7]

Rembrandt often signed his heads, showing that he considered them finished for market purposes, which thus becomes another defining criterion (Chapter V.9) of the Dutch tronie. Thus Gottwald removes the Rembrandt heads of Christ from her category. Yet she also concedes that they can still function as "master models" for use in religious paintings, like the precedent of Rubens, so important for the young Rembrandt. Already early in his career these character-laden heads became a signature element of Rembrandt's artistic identity, one that continued to the very end, in what Arthur Wheelock teasingly called his "late religious portraits". [8] But Gottwald's definition, like the heads of Christ, makes those late images problematic as proper tronies, so they lie outside the scope of this book. Yet she hypothesizes nevertheless that tronies (especially in Leiden) could suggest religious content while remaining "picturesque", without having determined identities, during an era of confessional controversies. Here it seems as if she tries to have her definitional boundaries without surrendering the flexibility of this very engaging, if elusive and seemingly durable, pictorial category.