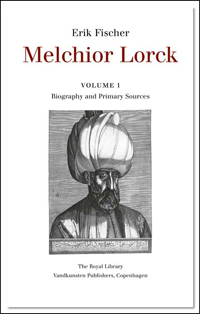 Some scholars devote their entire career to elucidating the work of a single artist, and both their identities become fused. Such has been the case with Erik Fischer, curator of prints and drawings at the Royal Museum of Fine Arts in Copenhagen. For half a century Fischer (b. 1920) has researched the life and works of Lorck, and now (with the able assistance of his successors, Ernst Jonas Bencard and Mikael Bøgh Rasmussen) his opus magnum has appeared, to be complemented with a fifth volume the catalogue raisonné, scheduled to appear shortly.

Melchior Lorck (or Lorichs; 1526/27-after 1583), born in Flensburg, so one of the earliest Danish artists of international renown, remains known chiefly for the drawings and subsequent prints that he made during a documentation of Ottoman Constantinople, where he served (1555-59) in the embassy of the Holy Roman Empire under his ambassador, the Fleming Ogier Giselin de Busbeq. Ogier wrote celebrated letters that were subsequently published, and he also has been credited in his own right for importing the tulip to western Europe, where it quickly became a craze among botanists and collectors alike (however, Anne Goldgar, Tulipmania, Chicago, 2007, 32f., casts doubt on documentation of this claim). Lorck's visual interests focused mainly on architecture, both ancient and contemporary, as well as costume studies of Turks from various social classes and professions, including the fabled military, which he would have had strategic interests in observing closely.

In our own "postcolonial" era, the careful observation of a foreign culture has been much discussed, even theorized, so Lorck provides a vivid early case study of the interested gaze by one superpower towards another. His main work was a Turkish Publication, only printed posthumously from woodblocks cut after his drawings corpus. That incomplete work appears in facsimile, based on a first edition of 1626, as Volume Two of this book; its chronological catalogue appears as Volume Three. It offers an early instance of what would become a Europe-wide vogue for costume books (Abraham de Bruyn, Cologne, 1577; Jost Amman, Frankfurt, 1586; Cesare Vecellio, Venice, 1590) of European and Turkish costumes in the later sixteenth century. Volume Four, supplemented with a treatise by Marco Iuliano, reproduces Lorck's extended ink panorama (1559; 12.5 meters long) of the Constantinople skyline, today preserved in the University Library, Leiden. Altogether Lorck created 274 works, of which 242 are signed and 218 dated. Some planned works, especially archaeological drawings, were never published as planned. Other drawings, such as his designs for festive decorations on the occasion of the triumphal entry by Archduke Maximilian (II) to Vienna (1563), vary enormously according to their purposes. All the extensive documentation is published here by Fischer in chronological order and with commentary (I, 143-313); it establishes that Lorck enjoyed associations with a wide circle of intellectuals, including Antwerp luminaries, publisher Christopher Plantin and cartographer Abraham Ortelius, whose album amicorum includes a poem by Lorck (cat. 1574, 5). A youthful, fashionable self-portrait appears in profile with pen in hand within the Constantinople panorama, suggesting the aristocratic bearing of an envoy.

Fischer scrutinizes the documentation, and clarifies that Lorck was not originally a nobleman, though he received a title from Emperor Ferdinand in 1564. Initial apprenticeship with an engraver in Lübeck led to his familiar satirical etching, The Pope as Wildman in Hell (1545), clearly tied to the Lutheranism adopted by Danish kings after 1536. Lorck contracted service for King Christian III in 1549 but traveled to Augsburg and Nuremberg early in his career; he also worked for Lutheran Count Palatine Ottheinrich in Neuburg an der Donau. German Renaissance paintings like the decorations in Munich conditioned Lorck's Esther (1552; Vienna), a work from Schloss Ambras, rarely discussed until now (85ff.) but already showing costume interests in both Turks and Hungarians and suggesting a link to Habsburg court patronage.

Lorck's career was forever shaped by his experience with Ogier in the capital of sultan Süleyman the Magnificent. Careful identifications of building sites (including the overall panorama), antique artifacts (including the lost Arcadius Column), and costumes characterize Fischer's discussions of individual works throughout, even before the catalogue volume. He later produced engravings of leading figures, including the sultan and Ismail, the Persian ambassador (1562). Instead of planned service to Danish King Frederik II, Lorck first worked in Vienna for Maximilian II, then resettled in Hamburg. At least some important time was spent around 1574 in Antwerp, principally with plans for publication with Plantin's press (title page = cat. no. 1575, 2), but history intervened in the form of the Dutch Revolt. Lorck did have intermittent connections with King Frederik II back in Denmark, and his full adoption as court painter (1580-82) probably culminated in a full-length portrait of the king at Frederiksborg (Museum of Natural History), painted in 1581 and newly attributed here to Lorck (135). After leaving this service, Lorck is not mentioned further in any documents, and his death date is unknown.

But the bulk of his energy in his latter years was surely consumed with preparing his Turkish studies for publication and perhaps with work towards his own costume book.

The word "definitive" is often loosely employed to characterize the principal monograph on an individual artist. In this case, the word is inadequate. Erik Fischer has literally delineated the life and career of Melchior Lorck and inscribed him into art history as a major observer - and participant - in Habsburg-Ottoman interactions. To this indefatigable scholar and his dedicated successors in Copenhagen, all of us who study sixteenth-century Northern graphics, especially those works where European artists look beyond their borders, now remain permanently in debt to Erik Fischer. We eagerly await the final publication of the catalogue and the culmination of a well-spent life's work.