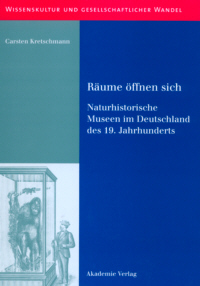 Carsten Kretschmann has written an intriguing and timely work that fits well into an ever-expanding body of historical literature on the growth of German museums of the late nineteenth and early twentieth century. Kretschmann's analysis, based on his dissertation research, focuses on four prominent natural history museums located in the cities of Berlin, Bremen, Frankfurt and Karlsruhe. These institutions typify three major lines of development: the institution in Karlsruhe departed from a ducal curiosity cabinet, the Berlin museum benefited greatly from the city's establishment as German capital, and the establishments in Bremen and Frankfurt were fuelled by the civic pride of its notables. Yet Kretschmann's work diverges from the traditional museum development narratives in that he tackles the important question of science's popularization through natural historical institutions. A detailed introduction lays out his intended contribution while connecting the historical investigation of natural history museums with allied disciplines such as anthropology. In it the author argues succinctly that sociologists of science have understood the popularization process as a top-down affair, that is, as permeating from an educated elite to an uneducated public. Instead, he maintains that the German public was by no means passive, but intervened in a popularizing process that "changed knowledge, transforming and constituting it anew" (10).

The work is divided into five chapters. The first chapter introduces the profiles of the four museums under examination and delineates their historical development. The most distinctive feature of this section is the unique patterns of these institutions. Rather than developing a singular outlook at display culture, the institutions operated in an environment that allowed ample room for experimentations within a variety of cultures of scientific knowledge. This aspect is elaborated upon in his second chapter where Kretschmann introduces the human factors behind the four natural history museums. The increasing specialization within the natural sciences during the nineteenth century introduced a number of experts into the museum environment. The third chapter examines the prominent museum labor of collecting and preparation of museum specimens. The need to accumulate objects frequently clashed with desire to incorporate and display new scientific insights. The ideas of Charles Darwin in particular were central to museum officials either embracing or vehemently rejecting the dogma of natural selection. Similarly, accumulation of collections influenced the important division between a Schausammlung (a collection on display for lay people), and a Wissenschaftliche Sammlung (a collection reserved for the trained scientists).

After providing ample groundwork in his first three sections of his book, it is in his last two chapters that Kretschmann tackles the thorny question of popularization of scientific ideas in the museum. The fourth chapter delineates the popularization process from the perspective of the museum officials. Directors had to adjust opening hours to the working schedules of their visitors, while bringing scientific knowledge to a wider public through museum guides, exhibits, public lectures, guided tours, and field trips. It is in the last chapter that Kretschmann attempts to elucidate the "two-way" popularization process by incorporating the visiting public and their outlook into his analysis. He immediately recognizes limitations to this approach: "We cannot speak to the internal knowledge of the visitor. It can not be sufficiently constructed through the means of interpretation." (267). As a good historian, Kretschmann remains tied to museum correspondence and contemporary printed materials. Consequently, when analyzing the mindset of the intended consumer of the scientific knowledge displayed in the halls of the museum, i.e., the visitor, his approach remains a bit conservative in the end. Nevertheless, Kretschmann skillfully explores the tensions between "Heimat" and "Ferne" (the local and the foreign). This prevailing tension at the heart of popular culture saturated with imperial ideas during the last three decades prior to the First World War as Germany was developing into a colonial nation. The emphasis on local fauna and flora and its preservation reigned supreme, although a wider world, partially due to imperial expansion, did find an important inclusion in the museum hallways. However, while museum displays did engage the imperial realm of the German expansive moment, it was never as important as, for instance, ethnological institutions. Likewise, localism also provided an important component of competition between natural history institutions not just in Germany, but also beyond its borders. The last chapter leaves this reviewer wondering whether Kretschmann could have ventured beyond available documents to probe the visitors' outlooks and their respective impacts on museum culture.

The last point should not detract from Kretschmann's important contribution to the growing body of literature on Museums in Wihelmine Germany. His discussion of natural museums in four prominent German cities adequately illustrates the historical context within which these institutions developed and ultimately thrived. Likewise, he needs to be commended for differentiating between the scientific approaches and the personalities that fuelled and filled the museums. In short, Räume öffnen sich is a recommended read for scholars interested in the development of museums, the representation of scientific ideas, and the tensions between popular and elite cultures at the turn of the twentieth century.