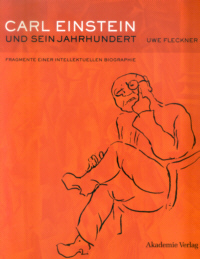 The scholarly reception of Carl Einstein (1885-1940) - poet, critic, theorist, art historian - is one of the more curious phenomena in the historiography of modern art. Since his rediscovery in the 1960s the number of articles and monographs on him has grown exponentially. What makes Einstein's reception so unusual is that this scholarship has been primarily the work of scholars of literature, although most of his writings, including his most ambitious works, deal with visual art. Moreover, many of these same authors are concerned not only with Einstein's literary corpus but with his art criticism and theory. Art historians, by contrast, have until recently shown comparatively little interest in Einstein. Admittedly, his pioneering book on African tribal sculpture, Negerplastik (1915, 1920), is routinely cited in the literature on modernist "primitivism". Yet in the literature on Cubism, on which he was one of the most prolific and brilliant early commentators, he has been largely ignored, unlike his contemporaries Guillaume Apollinaire, Maurice Raynal and Einstein's friend and compatriot Daniel-Henry Kahnweiler.

Uwe Fleckner, Professor in the Kunstgeschichtliches Seminar of the Universität Hamburg, seeks to redress this imbalance. It is his mission to study Einstein from an art-historical perspective, within the art cultures of France and Germany in his time. Even before reading a word, one sees that this will be a different kind of Einstein monograph. Those familiar with Einstein research have become accustomed to books, even those addressing his art criticism, with few or no illustrations. It is true that Einstein himself affirmed "die hoffnungslose Kluft zwischen Rede und Bild" (286); accordingly, object-specific descriptions are rare in his writing. This may be one reason why many authors think it acceptable to focus on his words in isolation from the art. Fleckner's book, copiously illustrated with 276 images - documentary photographs and reproductions of many of the works that accompanied Einstein's texts - is a welcome and long-overdue corrective to this unfortunate practice.

Fleckner offers his book as a "Folge von Fragmenten" (6). Foregoing the narrative flow of a "wissenschaftlichen Bildungsromans" (7), he justifies this structure by citing Einstein's own skepticism toward speciously unified narratives of stylistic development. To be sure, Fleckner's "fragments" are fragmentary only insofar as they treat selected aspects of Einstein's work. What he offers, in fact, is a collection of sixteen self-contained essays, versions of at least half of which previously appeared in anthologies that were not on Carl Einstein. Grouped under five topical headings, they follow a roughly chronological sequence, from Einstein's first reviews to the mid-1930s, when he abandoned art criticism.

The focus of much of the writing on Einstein's art criticism and theory has been Cubism and Surrealism, in his judgment the most significant art of his time. Fleckner writes on both, and has two particularly rich chapters on the latter. Yet, one of the signal merits of his book is that he also looks closely at the (mostly) overlooked: Einstein's rough critical treatment of the "solipsist" Wassily Kandinsky; his glowing admiration for Ernst Ludwig Kirchner, whom he exempted from his caustic critique of the other Brücke painters and expressionism more generally; his equivocal attitude toward the Berlin Dadaists and, subsequently, toward the Verism of Otto Dix and George Grosz; his surprising - not to say, baffling - enthusiasm for the painting of Moïse Kisling, whom he once hailed as having "saved" painting (112). One of the most welcome chapters deals with Einstein's contentious rivalry with the older critic Julius Meier-Graefe, the German champion of French impressionism and post-impressionism who became increasingly estranged from modernist art, as would Einstein himself in the 1930s. These and other essays nuance and enrich our understanding of the complex intellectual who was Carl Einstein.

While Fleckner's thematically driven "fragments" bear abundant fruit in these and other cases, inevitably his chosen structure also entails sacrifices. A detailed consideration of Einstein's unjustly neglected Afrikanische Plastik (1921), with which he claimed to launch a historical study of sub-Saharan African art, would have benefited Fleckner's discussion of the centrality of ethnographic art for the anthropological turn in Einstein's writing in the late 1920s. And what are we to make of Einstein's corrosive indictment of the avant-garde - and by implication, of himself - in his 1930s book-length manuscript Fabrikation der Fiktionen? This text Fleckner mentions only in passing. Because much of his discussion consists of detailed summations of and commentary on specific texts, this fragments his treatment of some interesting overriding issues. One of these is the word/image relationship in Einstein's art criticism. Fleckner argues that Einstein, eschewing description, fashioned his prose style as a verbal evocation, a linguistic parallel, to the visual style of a given artist. The author introduces this issue in his discussion of Dix and Grosz, writes on it at greater length in the context of Cubist criticism in his chapter "Das zerschlagene Wort", revisits it in the chapter on the photographic essay in Einstein's journal Documents, and again in his commentary on a late essay on Hans Arp. This reader was left wishing for a development of this fascinating thesis in an integrated discussion, with more rigorous comparative textual analyses.

In his effort to recuperate Einstein for art history Fleckner scrupulously respects disciplinary boundaries. Acknowledging that Einstein was a Grenzgänger, he nonetheless excludes consideration of his literary corpus - this, Fleckner declares, "konnte der kunsthistorische Text sich [...] nicht zum wissenschaftlichen Gegenstand machen"; his book "ist auf ausgesprochen kunsthistorische Ziele gerichtet" (5, 8). This self-imposed restriction limits the possibility of a more synthetic understanding of Einstein's mind in what, after all, purports to be an "intellektuelle Biographie", however fragmentary. In fact, many threads link Einstein's thought about art and his literary texts, beginning with his brilliant early novel, Bebuquin, oder die Dilettanten des Wunders, completed in 1909 before its author had published a word of art criticism. The best work on Einstein by literary scholars, such as that of Klaus Kiefer, has the merit of treating Einstein's corpus as a whole, the product of a single mind.

Finally, at times I wished for a more probing critical assessment of Einstein's historiographic significance. Is he interesting merely as part of the history of art criticism, as a chapter in the reception histories of African art, Cubism and Surrealism? Or does his writing, like that of his contemporary Walter Benjamin, bring neglected perspectives and fertile insights that can enrich our current research in these areas and on visual art generally? These criticisms, however, do not diminish Fleckner's substantial scholarly achievement. His book is destined to become a standard work on Carl Einstein.