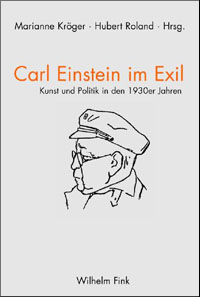 This volume of fourteen essays, nine in German and five in French, is based on a 2004 Cologne conference that examined the eventful final decade of Carl Einstein's life - "Einstein in exile". To be sure, Einstein had moved voluntarily from Berlin to Paris in May 1928, but after January 1933, stripped of his German citizenship and assets, this Wahlpariser did indeed become an exile, and suffered acutely from it. At this time he also became an exile in another, metaphorical sense, as he grew estranged from the cause he had championed for over two decades: by the time Georges Braque, Einstein's most developed account of his art theory, appeared in 1934 he had become bitterly disillusioned and abandoned writing on art. He then aimed his pen at the avant-garde, which he had come to see as arrogant, elitist, and self-deluded, indicting it with a rambling, bitter, and cathartic diatribe, "Die Fabrikation der Fiktionen". As the Spanish civil war began, Einstein must have seen an opportunity to renew and redeem his life, and he and his wife set out for Barcelona. There he soon joined the anarcho-syndicalist militia of Buenaventura Durruti, assuming major leadership responsibilities in the campaign. As he explained to Daniel-Henry Kahnweiler, "dans les temps qui courent le fusil est nécessaire pour compenser la lâcheté du stylo".

This division between writing and political action in the last decade of Einstein's life has carried over into the literature. Most scholarship on this period has focused on the writing rather than on the Spanish episode, in part because the latter was so sparsely documented. One of the merits of the present volume is that it brings these two halves of Einstein's final decade together. Nevertheless, it remains difficult to bridge this gap precisely because his last years have seemed to constitute such a sharp rupture with his previous life as a writer. Extending this pattern, the contributions mostly fall into two broad areas: four of them, filling almost half of the book's pages, deal with Einstein's time in Spain and its aftermath, introducing new documentary material that substantially augments our knowledge of his last years; the remaining essays offer fresh perspectives on Einstein's later writings or his affinities with contemporary authors.

There are two essays on Einstein's Braque book (Dominique Chateau and Lucien Massaert), and German Neundorfer offers a thoughtful and constructive proposal for a critical edition of the fragments and notes for Einstein's unfinished novel, known as "BEB II", of which only excerpts have been published. Two essays are dedicated to the posthumously published "Fabrikation der Fiktionen", which has still not received the attention it merits. Here Einstein unsparingly savaged not only the avant-garde but, by implication, his own critical project. The text has therefore resisted easy integration into sympathetic scholarly accounts that valorize that project. In the contributions by Erich Kleinschmidt and Hubert Roland, however, "Fabrikation der Fiktionen" emerges as a kind of hinge between the two phases of Einstein's last decade, establishing continuities in both directions. Roland focuses on one of its pervasive themes - Einstein's passionate affirmation of "Gemeinschaft", of "die Kollektive", to which he now saw the individualism and elitism of avant-garde intellectuals as an impediment. His essay suggests a bridge from Einstein's professed ideals, however vague and ambivalent, to his direct experience of solidarity and collective purpose with his comrades in Spain. As Einstein declared in his radio address on the fallen Durruti: "In der Kolonne Durruti kennt man nur die kollektive Syntax. Die Kameraden werden die Literaten lehren, die Grammatik im kollektiven Sinn zu erneuern".

For Kleinschmidt, Einstein's irritatingly redundant, seemingly amorphous text is not so crude - nor as anti-modernist - as it appears. He discerns within it a contradiction between "Textgestalt" and "Textgehalt", it deconstructs itself in the sense in which Paul de Man used that term: it "simultaneously asserts and denies the authority of its own rhetorical mode". Even as Einstein critiques modernism, he simultaneously deploys its textual devices and rhetorical modes. It is a provocative argument, yet one wishes that to support his claims Kleinschmidt had followed de Man's example in offering close readings of extended passages of Einstein's text.

Another merit of this collection is that several contributors offer original and productive perspectives on relations between Einstein's thought and that of some of his contemporaries, integrating him into a broader intellectual context. Andreas Michel investigates the surprising discursive constellation of the leftist Einstein and the rightist Martin Heidegger around the art of Paul Klee. Marc Sagnol explores possible commonalities between Walter Benjamin and Einstein's theories on the history of art, while Rainer Rumold also considers Einstein and Benjamin, along with fellow exile Hermann Broch under the rubric of a "negative Ästhetik". Nicola Creighton addresses the hitherto neglected question of affinities and disparities between Einstein and Theodor W. Adorno around certain central questions of their respective aesthetic theories.

The most rewarding material in the book is to be found in its first section, dealing with Einstein's time in Spain and its aftermath, the seventeen months from his return to France up to his suicide in July 1940, in flight from the advancing German invasion. Marianne Kröger presents a newly discovered 32-page Spanish brochure on the German intervention in Spain, published in 1938 and introduced as the work of an anonymous German author. On the basis of circumstantial evidence and close textual analysis she believes that author to be Einstein. If this is indeed the case, it augments our picture of his activity in Spain, which would now include the role of political publicist against Hitler's Germany. Much of this seems plausible until she comes to the question of intended audience: since there was no need to persuade his Spanish comrades of what they had witnessed firsthand, Kröger speculates that the pamphlet may have targeted a foreign readership - perhaps even the German generals, in hopes of provoking a putsch. Yet since she cites evidence that the brochure text was translated from a French original, one asks why, if that were its purpose, would it then have been published in Spanish?

Liliane Meffre, whose 2002 monograph on Einstein introduced valuable new documentation on the period of the 1930s, contributes a commentary on three previously unknown documents that relate to the years 1936-1940. The richest - and longest - contribution, however, is that of the French historian Alain Ruiz. His 56-page essay on the last year of Einstein's life builds on Meffre's earlier discoveries and augments them with documentation that brings extensive, concrete new information on the grim odyssey of the final months. It is a harrowing account, and a masterful achievement of historical reconstruction.