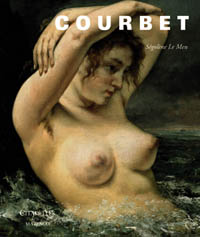 Ségolène Le Men's highly intelligent book is a significant contribution to the extensive literature on Courbet. She traces the career of Gustave Courbet (1819-1877) and the reception of his work, noting that no other painter has elicited such a "divergent range of interpretations inspired by current trends in art history."(18). Le Men's text is rich in its references and comparisons with literature, popular imagery, music and theater. She observes that Courbet constructed his oeuvre rather like Balzac's Comédie Humaine, into scenes of life of people from different backgrounds and places, and argues that these also indicate the modernity of his work.

The five chapters follow the genesis of each aspect of Courbet's work, both in time and space and the ways it reflects his ideas of an artist's place in society at a time of great change. A brief summary of key points in each chapter follows.

In Chapter 1 "The formative Years: Courbet the Romantic" the author reviews Courbet's childhood, family and friends from Ornans, his unhappy school years, and his arrival in Paris in 1839. Le Men discusses his exposure to caricature, visits to the Salons and his taste for scenes of daily life. Courbet had been immersed in the culture of popular and religious imagery since childhood.

Le Men discusses the artist's self portraits that helped forge his personal identity and reflect his Romantic leanings. She analyzes the ways Courbet diffused his self portraits into other pictorial genres: landscapes, animal paintings, still lives, forecasting his future work. His many paintings of friends, indicates that "Courbet's identity was formed in society." (81)

Regarding Courbet's early paintings of the sea at Normandy Le Men relates the formal qualities of his paintings to a kind of metaphysics. "This poetic, romantic horizontal and vertical of the sublime...had the scope of an aesthetic and spiritual experience; it transformed a conventional picturesque aesthetic into a completely modern schema of abstraction..." (45).

The second chapter "A Bohemian in Paris" discusses Courbet's transition to the Realist image in which he forged. "Through acts of provocation that begged to be caricaturized in their comical extravagance while publicizing his work....scenes of art and life merged into one another for Courbet." (97)

Le Men explores politics and emblematic female figures in Peasant Girl with a Scarf, c. 1848, which she suggests is a "real allegory" of the Republic. In his painting of Mère Grégoire, c. 1855 Courbet challenges "the distribution of roles according to age, sex and social milieu." (115).This portrait of a strong woman is the pendant to the portrait of illustrious men. She "encapsulates the experience and influence of bohemian life in his art. Conceived as an enigma or mystery image, his portrait shows how familiar the artist had become with the code language of images." (117).

Chapter 3 "A Master on the Open Road" includes a detailed account and interpretation of A Burial at Ornans in which the range of ages and social status becomes "a kind of microcosm of the French nation and society as a whole." (148). Courbet drew on the illustrated panoramic literature with its various visual and literary traditions, in keeping with Balzac's Comédie humaine. Courbet combined the traditionally incompatible idea of a cortege with the bird's eye view of landscapes of the time. When the painting was shown in the Salon of 1850, the general outrage reflected, Le Men argues, the surprise created by his radical new approach to Realism "based on sources alien to high art - popular imagery, caricature and contemporary illustration." (151).

Gilles Deleuze's trope of the voyager as the trajectory of the external and inner path, Le Men finds relevant to Courbet in his series of paintings on the road, which includes The Meeting where Courbet encounters his patron Bruyas outside Montpellier. The transfer of traditional imagery "represents a swan song even as it assumes the value of an act of protest." (157) It also marks the great transformation of Courbet's art from figure to nature, and from large paintings for the Salon to smaller landscapes for the art market.

Courbet became the painter of poverty. In the Stonebreakers, he adopted the manner and style of popular imagery as well as an abridged version of the cycle of the ages and the wretchedness of human life at all stages. His self conscious awkward passages become part of his campaign for Realism, which was part of his commitment to the poor, adopting their manners and styles.

In the fourth chapter, "Art, Business and Naturalism," Le Men interprets The Painter's Studio as looking backward through the self portrait and forward, suggested by the canvas on which the artist is painting the Franche-Comté landscape. The painting, she writes, "functions as a kind of exhibition within the exhibition...setting up a performative interplay between the viewer and the figures in the picture. (194)

Le Men suggests Courbet's affinity with Berlioz's Episode in the Life of an Artist: Fantastic Symphony. She writes that Courbet was no longer structuring his work in series but as successive phases "allowing for diachronic and autobiographical dissection," (203) marking a significant new development and one that would characterize modern art, such as in Picasso's period paintings. The self-portrait marks each phase. "The vast space of The Painter's Studio draws its ambivalence from its dual panoramic/panoptic functioning: thus it can be taken not only as a social fresco in the manner of the Comédie humaine, but also as a closely surveyed prison space...." (203). It is also a "diagrammatic representation of the ages of man, of memory images that are simultaneous mnemonic and pedagogical representations." (203)

The complex iconography of The Painter's Studio "generates both a discourse in images and an enigma whose meaning is to be guessed, which allows viewers and critics to interpret the work and propose alternative readings." (205). The painting highlights the importance of critics, particularly Baudelaire and Champfleury. "In The Painter's Studio the memory images surrounds the artist not only with the architectural space of the studio but also with the latent trope of the tree of art and contemporary society, of which he becomes, as it were, the trunk." (209).

Courbet fulfilled his ideals of an indigenous art of native landscape and of "modern rationalism adopted to the Naturalist current in its scenes of rural or urban manners." (220). The idea was to paint the truth, "setting the physical above the metaphysical," which Le Men writes influenced landscape painting in the 20th century. (226).

The obverse was also evident in Courbet's "long - unrevealed taste for hidden images and the existence of the secret painting" (228) - leading to The Origin of the World, "which pushes the reality effect to the level of fantasy." (228). Its realism is challenged "by underscoring the work's uncertain status as a real allegory oscillating between body and landscape." (232). "Well before Bataille, the voyeuristic element is eloquently present, and well before Lacan the theme of Psyche introduced the mirror phase." (235).

The Origin of the World is "the antithesis of this history painting: instead of illustrating its argument, it sets up a performative system... ." (242). By shrinking the picture field he intensifies "the indexical quality of his realism." (244). The painting, "the last word in Naturalism - may also, through parallel and transfer, be the first word in psychoanalysis as applied to the pictorial eye and the Medusa fantasy... ." (249).

"The mode of reception that links artistic pleasure to desire and sexuality is grounded in an interplay between display and dissimulation; no stranger to the history of representation, it is to be found in the tradition of hidden images pursued by Courbet in his feminized anthropomorphizing of the sources of the Loue, in which, as a projection of 'the origin of the world', the site becomes the locus of an endless genesis." (249)

The final period is discussed in Chapter 5 "Glory and Exile", when self-portraiture continues but in the form of metaphor and indirection. Le Men notes that current interest in the psychology of perception, allows us to see hidden self portraits in the landscape as a kind of Realism into which is inscribed the emergence of Symbolism. At the same time, she sees these landscapes as metaphors of the artist's work, "who, when his political adversaries were obliterating his paintings, riposted with ambiguous works in which a continuous oscillation of meaning and the effects of anthropomorphic perception act on the beholder." (282).

Le Men concludes that oscillation between Realism and abstraction characterizes his style and feeling for nature, as one sees in his paintings of the sea. (292). She introduces the idea that Courbet, in painting man confronted with nature as if on the first day of creation, was "rehearsing the cosmological narrative of Genesis in the language of a secular naturalism inherited from the Enlightenment." (309). The Sea at Palevas, "is a manifesto that introduces the metaphysical and relativity into the absolute." She sees the painting as heralding a modern genre, by the "insertion of the human figure, defines the modern attitude toward nature... ." (309)

The Cliffs of Etretat and The Waves, where a storm is expressed through the violence of the handling of the paint, Le Men sees in the spirit of Hugo who in his novel about exile, The Toilers of the Sea, 1866, writes about the sea and its storms as a mirror of the artist's temperament.

The late works include Courbet's paintings of the hunt. The Trout is "a tragic self-portrait of a wounded man, in which the artist transposes the theme of the hunter hunted into the register of fishing." (339). This was at a time that Courbet suffered imprisonment, the death of his mother, failing health, and exile.

The figure of the hunter serves as a self portrait. "Autobiography becomes a memory; the gaze, retrospective. In these hunting paintings, passion and compassion meet and the painter's viewpoint is often that of the hunted animal." (359).

In her conclusion Le Men writes that Courbet's Realist manifesto invented the notion of contemporary art, based on two premises: "First, the artist interprets his time, and second, the singularity of his individual style arises from a dialogue with art, without distinguishing the present from the past or hierarchizing forms of artistic expression. The genesis of art through dialogue is the key condition for contemporary art... ." (361). Courbet made his life as an artist and as a man in his quest for identity.

In his exhibition of 1855 and 1867, Le Men sees Courbet drawing the whole of his work into a single unit. She briefly discusses Courbet's influence on Delacroix, Manet, Pissarro, Cézanne, and Maillol and into the 20th century in the work of Magritte, Picasso, and Brice Marden.

While acknowledging much previous scholarship, Ségolène Le Men offers a rich and original reading of Courbet. This is very well written book, beautifully illustrated with many revealing details, is of great value both to the scholar and interested reader.