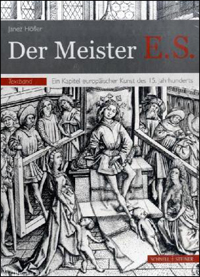 Janez Höfler, the noted Slovenian scholar, must be very brave to tackle Meister E.S., the talented mid-fifteenth century engraver. It is easy to be overwhelmed initially by what is not known about this master. Although he is identified by his monogram, the letters E and, less often, S appear only on eighteen late prints. We lack his name and all biographical information including where he trained and worked. Just as daunting are the questions and problems posed by the massive attributed œuvre. Meister E.S. was among the most prolific masters of his century. About 320 engravings, many unique impressions, are ascribed to him. Another 180 engravings by Israhel van Meckenem and other contemporary artists may reproduce his now lost compositions.

Höfler builds upon a solid foundation of earlier scholarship. The artist was singled out for study already in 1747. Max Lehrs and Max Geisberg, two pioneers of German print research, wrote often about the artist. Dozens of scholars have focused on issues of attribution, stylistic development, and reception. Especially notable are the excellent exhibition catalogues by Alan Shestack in 1967 for the Philadelphia Museum of Art and by Holm Bevers in 1986 for the Staatliche Graphische Sammlung in Munich. Nevertheless, when you peek more closely at the literature you realize how personal opinions, questionable assumptions, and sometimes shaky methodological approaches distort our understanding of Meister E.S. Höfler clearly recognizes and seeks to rectify many of these shortcomings.

Chapter II ("Der Meister und sein Werk") nicely introduces the artist and major issues. Meister E.S. can be localized to the Upper Rhine but not attached definitively to any of the towns from Basel to Strasbourg. Do the letters E and S denote a monogram or might these have another meaning? Martin Schongauer placed M S on all of his engravings so the assumption has been that E and S refer to our artist's name. Höfler notes these letters appear infrequently and not always together on a few prints from the 1460s. Thus earlier efforts to find a documented artist with these initials likely are baseless. The author wonders whether the E might refer to Einsiedeln, the Swiss Benedictine monastery for which the artist made three engravings in conjunction with the community's 500th anniversary in 1466. Höfler claims the Einsiedeln prints mark the first known instance of an artist being commissioned to make prints. While plausible, one can equally speculate that Meister E.S. recognized a lucrative commercial opportunity. He prepared three engravings of varying visual complexities and, one presumes, costs for some of the 130,000 pilgrims who visited Einsiedeln that year. Höfler questions the prevailing assumption that most early engravers first trained as goldsmiths. The rich pictorial character of some of Meister E.S.'s prints and attributed drawings suggests he, like Schongauer, might have had some training as a painter. Unfortunately, neither paintings nor goldsmith objects can be linked to Meister E.S.'s hand. This prompts the author to wonder when engravers first supported themselves solely by the sale of prints.

Chapter III ("Chronologie und Stil") debates Max Geisberg. The latter proposed a precise chronology for Meister E.S.'s engravings: early works (up to 1450), first and second middle periods (1450-55 and 1455-60 respectively), and late prints (1460-67). Höfler modifies this here and in Appendix I (pp. 209-13), which presents an even more detailed chronological ordering. He argues that the engraver's first prints might date as early as 1440 or so. Recognizing that this is a matter of personal opinion, Höfler proposes looking for "stylistically closed groups," which might be datable by external means such as works by other artists. This, however, is where I have problems with some of Höfler's arguments. For instance, he feels that the Nativity (Lehrs 22) is Meister E.S.'s earliest engraving. He cites (pp. 25-26) it as a source for Andrea Mantegna's Adoration of the Shepherds painting (Fig. 36) in New York. The author thinks Mantegna saw this engraving in Ferrara in 1449 and soon afterward modeled his picture after the composition. Unfortunately, when these two images are placed side by side, there are, in my opinion, no similarities. Often in this and later chapters Höfler asks his readers to accept stylistic comparisons that I find either very tenuous or better explained by the requirements of a common subject. Höfler, of course, makes many astute comparisons, such as the Passion Retable from Haldern (Kreis Rees; Figs. 39-40), now in Münster, whose scenes are clearly based upon Meister E.S.'s engravings (Lehrs 47-48). Sometimes the dating and sequencing of prints depend upon the author's Morellian approach to landscapes and floral details (pp. 31 ff.) or drapery fold patterns. Being inherently skeptical of connoisseurship as a method for making precise year by year distinctions in an artist's development, I have doubts about the even finer parsing or assigning of dates in five year intervals by Höfler. At the end of the chapter he asks whether Meister E.S., like Martin Schongauer, personally authored all of his prints or was aided by assistants. The author thinks certain engravings of the 1460s betray other hands.

Höfler's sensitive understanding of the engravings, the artist's sources, and his inventive designs are evident in Chapter IV ("Das Werk"). Meister E.S.'s prodigious output reveals a keen awareness of contemporary art, especially that produced in the Upper Rhine. Sometimes, however, scholars forget that this mid-fifteenth century master did not have a photographic archive or, at least, Max J. Friedländer's Early Netherlandish Painting corpus to consult. Höfler rarely considers whether certain proposed sources, such as Master of Flémalle's Dijon Nativity (Fig. 47), were accessible either in the original or in copies in the 1440s in the Upper Rhine.

Chapter V explores Meister E.S.'s two-way relationship with sculpture. His art was strongly influenced by contemporary Rhenish sculpture and his engravings, in turn, inspired sculptors and others artisans. Especially useful is Höfler's discussion of Nicolaus Gerhaert. It has often been argued that the famed sculptor profoundly affected Meister E.S. and that several of his prints reproduce now lost carvings. Höfler correctly points out that Meister E.S. had been active for almost two decades before Gerhaert appeared in Strasbourg. More plausibly, his engravings may have inspired the sculptor.

Chapter VI addresses the reception of Meister E.S.'s engravings in the fifteenth century. Höfler remarks here and in his conclusion that historically Meister E.S. has been overshadowed by Schongauer and Dürer, who were more gifted artists. By the standards of his day, however, he was remarkably successful. This may be demonstrated too by the many prints copying his known and, as listed in Appendix II, now lost engravings. I would have liked a more discussion of Meister E.S.'s Nachlass, specifically his relationship with Israhel van Meckenem, who later owned and reused many of his engraved copper plates.

Höfler is to be commended for his excellent monograph. My minor differences of opinion by no means diminish the great utility of his study. The book includes illustrations of every engraving plus 249 comparative photographs.