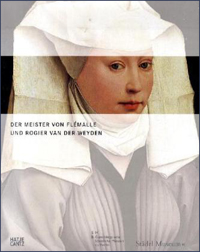 Who is the Master of Flémalle? This simple question has long vexed specialists. The widely divergent answers depend upon the individual scholar's assessment of how a large corpus of unsigned, undated, and largely undocumented paintings relate. The stakes are high since some paintings pre-date the art of Jan and Hubert van Eyck. How one starts a story or begins writing the history of an artistic period is important. Karel van Mander's Schilder-boeck (1604) commences with Jan van Eyck whose technical brilliance (including his "invention" of oil painting) and pictorial virtuosity seemingly sprang out of nowhere. Van Mander claims he was unable to find information about any Netherlandish artists before the van Eycks. The shortcomings of van Mander's biographical history were revealed in 1849 when the Städel Kunstinstitut in Frankfurt acquired three large panels said to come from the abbey of Flémalle near Liège. Even though it was soon determined that this provenance was factitious, the creator of the Frankfurt paintings was dubbed the Master of Flémalle.

Suddenly there was another artist besides the van Eycks active at the dawn of the ars nova (to borrow Erwin Panofsky's problematic term). Generations of scholars from Hugo von Tschudi (1890s) and Georges Hulin de Loo (1909) to Max J. Friedländer (1902-37) and Panofsky (1953) attributed an ever-growing corpus of paintings to the Master of Flémalle. The style and composition of some works relate closely to the early paintings of Rogier van der Weyden and Jacques Daret, both of whom are documented in the workshop of Robert Campin in Tournai until 1432. Because of this connection, the Master of Flémalle was given an historical identity as Robert Campin. For several decades this association was broadly, if never universally, accepted. In 1974 Lorne Campbell questioned whether the core works attributed to the Master of Flémalle/Campin were by a single artist as he proposed a separate Master of the Mérode Altarpiece. The deconstruction and reconstruction of the Master of Flémalle/Campin, especially how the paintings might relate to the young van der Weyden, have generated often heated debate. Elisabeth Dhanens (1995), Albert Châtelet (1996 and 1999), Dirk de Vos (1999), Stephan Kemperdick (1999), and Felix Thürlemann (2002) authored new and in their own ways highly stimulating monographs on these artists. Thürlemann reassigns most of van der Weyden's best pictures of the 1430s, including the Descent from the Cross in the Prado, to Campin. Whether or not one agrees with Thürlemann, he usefully reminds us how limited our secure knowledge is of any of these masters.

The marvelous show in Frankfurt and then Berlin as well as the outstanding accompanying catalogue come at a good moment. Stephan Kemperdick, Jochen Sander, and their colleagues examine forty-eight exhibited paintings by or stylistically associated with the Master of Flémalle/Campin, Daret, and van der Weyden. Eleven essays helpfully frame the debate and contextualize the issues. Kemperdick and Sander's introduction recalls the history of how the Master of Flémalle evolved into Robert Campin. To demonstrate the fragility of traditional attributions, they persuasively argue that the exquisite Portraits of a Man and a Woman (London, National Gallery), long ascribed to the Master of Flémalle/Campin, are by the young van der Weyden based upon close stylistic comparisons with the heads in the latter's Descent from the Cross.

Sander asks whether the ars nova was truly revolutionary. He contrasts paintings by Konrad von Soest and Gentile da Fabriano, highly esteemed contemporaries of Campin. Their art, representative of the International Style, seems decidedly flat and old fashioned when set beside the more optically and technically sophisticated pictures by the Master of Flémalle/Campin group or the van Eycks who skillfully record the observable world and a range of human emotions. Was this new naturalism perceived originally as a means for heightening a picture's devotional efficacy?

Antje-Fee Köllermann usefully hunts for precursors. The paintings of Melchior Broederlam, Jan Malouel, and a few other Netherlandish artists around 1400-30, including the famed tapestry weavers in Tournai, offer very few precedents for the coming revolution, beyond the occasional stylistic or compositional feature. When pondering the origins of the ars nova it helps to recall how little early Netherlandish art survives. Our understanding of this era remains woefully incomplete since we lack most paintings, including murals, canvas pictures, and ephemeral decorations.

Kemperdick summarizes the documentary records for Campin, Daret, and van der Weyden. The archival accounts, however, do not explain why Daret (born c. 1401) and van der Weyden (born c. 1399) remained in Campin's atelier until 1432. Both were mature artists and of an age when normally they would have become independent masters. Indeed in 1433 Daret was commissioned to create a major altarpiece for the Abbey of Saint Vaast in Arras and two years later van der Weyden was appointed the official city painter of Brussels.

The paucity of signed or documented paintings further complicates matters. Only Daret's Saint Vaast altarpiece and van der Weyden's now destroyed justice paintings (known through a tapestry copy now in Bern) made for Brussels' city hall in about 1439 are securely by the respective masters. In separate essays Sander and Kemperdick insightfully labor to establish stylistic identities for these artists and others in their circle. Sander focuses on the Descent from the Cross as the basis for attributing other paintings to van der Weyden, who is first linked with this altarpiece in 1565. The stylistic heterogeneity of the pictures attributed to the Master of Flémalle/Campin poses greater challenges. Kemperdick offers a solution to this dilemma by considering the role in production of a large workshop, such as Campin's or van der Weyden's. By pointing out the stylistic distinctions even within a single work, such as van der Weyden's Saint Columba Altarpiece in Munich, he sensibly argues for the collaboration of assistants. Some of these assistants subsequently established their own workshops and not surprisingly disseminated the styles and compositions of the Master of Flémalle/Campin or van der Weyden.

In another essay Kemperdick addresses the forms and functions of altarpieces. How do the interior and exterior of the wings relate to the center or corpus scene? Do these associations change when the wings are fixed as opposed to moveable? Were the Master of Flémalle/Campin or the van Eycks responsible for initiating the use of grisaille on the exterior wings of altars? How did these pictures interact with antependia and other altar decorations? Scholars today privilege painting above all other media. Kemperdick reminds us that none of the celebrated painted altarpieces by the Master of Flémalle/Campin or the van Eycks adorned the high altar of a church. Instead sculpted retables, now virtually all destroyed, were favored for the main altar.

Well before the publication of Panofsky's Early Netherlandish Painting in 1953, scholars recognized the iconographic complexities of many paintings by the Master of Flémalle/Campin, van der Weyden, or the van Eycks. Bastian Eclercy surveys the history of this quest to uncover meaning in these pictures. While Panofsky's term "disguised symbolism" has been appropriately challenged since the 1970s, pictures such as the Mérode Altarpiece in New York invite the Sherlock Holmes lurking within every art historian. Using this picture as an example, Eclercy asks what symbolic readings are plausible. Or put differently, when can an apple be just an apple? I do question whether our modern cleverness, especially the declaration of some obscure text as the key source, transcends either the interpretative abilities or the interests of most fifteenth century viewers.

As noted in their conclusion, Kemperdick and Sander endeavor to remove personal subjectivity from their division of paintings into stylistically cohesive groups. In the absence of signed and documented paintings, they enlist Peter Klein's dendrochronological research (pp. 161-167) to aid with dating parameters. Ultimately, their judgments are based upon their trained eyes. Connoisseurship remains a vital skill for art historians. Yet scholarly consensus is difficult to achieve as even a quick survey of the recent monographs on the Master of Flémalle/Campin or van der Weyden proves. Kemperdick and Sander wisely cluster related works together without dogmatically labeling any as Robert Campin. Indeed the traditional oeuvre of the Master of Flémalle/Campin is divided into multiple groups. Rather than a single artist, one must think of several workshops mainly in Tournai. Although this parsing of hands uneasily reminds me of earlier debates about the Ghent Altarpiece or the Turin-Milan Hours, Kemperdick and Sander are often very persuasive in their stylistic groupings and their suggestions about the influences flowing between these different masters. Their tight, almost year-by-year chronology proposed for van der Weyden in the 1430s and 1440s strikes me as overly rigid. It implies too that artists develop in a direct or linear fashion, an assumption that excludes either the needs of a specific commission or the wishes of a particular patron who might request something more conservative or more adventurous.

Kemperdick, Sander, and their associates have created a superb study of this vital and problematic chapter of early Netherlandish painting. Perhaps appropriately, the ink was scarcely dry on the Frankfurt-Berlin catalogue when another quite different exhibition entitled Rogier van der Weyden 1400-1464: Master of Passions opened at the Museum Leuven. The latter runs from 20 September to 6 December 2009 and includes a 576 page catalogue edited by Jan van der Stock and Lorne Campbell. The debate remains far from settled - probably much to the delight of my professional colleagues.