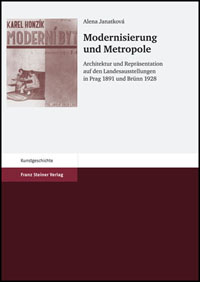 Most visitors to Prague will at some time enjoy the fine views offered by the city's very own Eiffel Tower, which has stood on the Petřín Hill (or Laurentiusberg) since 1891. Few will be aware, however, that the tower was originally the centrepiece of a large exhibition, which sought to propel the historic capital of Bohemia into the major league of European cities. The scaled down version of Gustave Eiffel's masterpiece was not the only thing Prague took from the Exposition Universelle of 1889. As Alena Janatková describes in the first half of her interesting comparative study, the 1891 exhibition also featured a Galerie des Machines in iron and glass, a Cour d'honneur flanked by monumental historicist façades, and a neo-vernacular Bohemian village reminiscent of the ethnographic displays which became such a feature of nineteenth-century world's fairs. As in Paris, the Prague exhibition marked a significant centenary: Emperor Leopold II's coronation as King of Bohemia in 1791, which had been accompanied by what was claimed to be the first industrial exhibition on the European mainland. The Parisian orientation of the 1891 fair was no coincidence. As Janatková observes, the modernization project in East-Central Europe was always closely tied to strategies of representation. Although originally conceived as an event for all the Dual Monarchy's Bohemian subjects, the lead was taken by Prague's Czech-led Chamber of Commerce and it quickly became a manifestation of Czech national aspirations, especially after the withdrawal of the German community's participation in November 1890 (they later staged a counter-exhibition at Reichenberg in 1906). By aligning their city with Paris rather than Vienna, Prague's civic and business leaders were demonstrating not only their awareness of current architectural trends, but also their growing sense of national self confidence, which was further boosted by the opening of the Museum of the Kingdom of Bohemia and the Czech Academy of Sciences, Language and Art in the same year.

By the time of the 1928 Brünn exhibition a Czech state had become a reality of course, but issues of national identity and style remained highly contested. Not only did the new republic combine Czechs and Slovaks, but there was still a significant German community, whose contribution to the 1928 exhibition was designed to emphasise the distinctiveness of German craft traditions. Indeed, nowhere were the divisions within the republic more apparent than in the fact that two separate Werkbünde were involved in mounting the show: the Czechoslovak Werkbund (1920); and the Werkbund of the Germans in Czechoslovakia (1926). The former was eager to embrace modern pre-fabricated construction methods and the theories of Le Corbusier, and set the tone with its exhibition of contemporary housing for the masses, much inspired by the Stuttgart Weissenhofsiedlung of 1927. The dominant vision behind the 1928 exhibition was the modern metropolis, with its standardized forms, planning zones and wide freeways, which could be better envisaged in the provincial capital of Moravia than in Bohemia's historic heart. Indeed, the influential avant-garde artist, critic and theorist Karel Teige, whose work on modernism and the metropolis is the focus of a separate chapter here, argued that the 'unhygienic, uncomfortable, dead' city of Prague was uninhabitable for modern man (21).

Janatková's second case study is probably more familiar to architectural historians than her first, since the Brünn exhibition features in several classic studies of architectural modernism, including Hitchcock and Johnson's The International Style (New York, 1932). Neither event is, however, discussed in detail in the existing German- or English-language historiography on world's fairs. At only 106 pages this book is undoubtedly a modest work, and at times its brevity is frustrating. The comparative dimension could have been developed more fully, and there is little on the popular or critical reception of either exhibition. The author nevertheless deserves credit for unearthing a good deal of original material, and the unusually generous number of illustrations (76 in total) is particularly helpful. One of Janatková's most interesting conclusions is that the Czechoslovak Republic's embrace of standardization and architectural modernism in the 1920s was a typical strategy of 'young / small' nations, which saw it as a way of quickly achieving parity with bigger or longer established neighbours. It would be interesting to know how far Janatková's colleagues in the now completed Leipzig research project on 'Kulturelle Pluralität, nationale Identität und Modernisierung in ostmitteleuropäischen Metropolen 1900-1930' would agree with this finding.