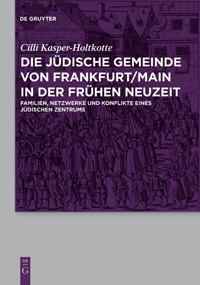 This book is a welcome addition to the literature on the Jewish community of early modern Frankfurt/Main. Frankfurt was unusual and unusually important for German Jewish history for variety of reasons, geographic, economic, and political, but above all because of the City Council's policy of encouraging the settlement of wealthy Jews there. Apart from a two-year hiatus (1614-1616), Frankfurt, like Prague, Worms, and Friedberg, was one of a few important cities within the Holy Roman Empire that supported the presence of a Jewish community throughout the early modern period. The small circle of families that dominated the social, economic and political affairs of that community is the topic of this book.

The book is divided into five chapters of unequal length. The first chapter sets the stage, addressing the basic conditions of Jewish life in Frankfurt between ca. 1460 when the community moved into its new Jewish quarter, and 1711, when a great fire destroyed it. The second chapter sketches the most important financial and economic activities of the community elite. The third chapter (240 pages long) is the centerpiece of the book in that the author reports and analyzes both everyday conflicts between the city's non-Jews and Jews, but especially focuses on three major conflicts. These were the Fettmilch uprising (1612-1616), the sharp disagreements that were related to the Thirty Years War, and a long running power struggle that took place during the 1670s and 1680s. These confrontations between the city's burghers, the city council, outside powers such as the imperial court in Vienna, and the Jews of Frankfurt itself, often revealed fault lines within the community itself. The fourth chapter is devoted to a prosopographical investigation of the leading families of the Frankfurt community and their networks of supporters including their extended families, friends, patrons, and dependents (13). The fifth chapter forms the conclusion. The author's discussion in each chapter is supported by an ample (276 page) series of appendices. The book is mostly based upon non-Jewish sources preserved in the Frankfurt City Archive (Institut für Stadtgeschichte), but also upon sources preserved in the Hessian State Archives in Marburg and Darmstadt.

Given the acknowledged importance of the Frankfurt Jewish community this book rather surprisingly has found a niche of its own that does not much overlap with previous literature. Among studies of Frankfurt's own Jewish history, Isidor Krakauer's works remain fundamental, but do not address the Jewish elite of the sixteenth and seventeenth centuries. More comparative works such as Andreas Götzman's recent study Jüdische Autonomie in der Frühen Neuzeit. Recht und Gemeinschaft im deutschen Judentum (Göttingen 2008) did not devote particular attention to the Frankfurt Jewish elite. The aspect of current Jewish research that the book addresses most directly is Rotraud Ries' work on court Jews and their families. Ries's comparative essay "Die Mitte des Netzes: Zur zentralen Rolle Frankfurts für die Judenschaft im Reich (16.-18. Jahrhundert)" receives particular attention (published in: Fritz Backhaus u.a. (Hgg.): Frankfurter Judengasse. Jüdisches Leben in der Frühen Neuzeit (Frankfurt/Main 2006), 118-30). The author argues that Ries's conclusion that the community elite retained its power because of its intensive network of relations ("intensive verwandschaftliche Vernetzung" [398]) was an inadequate explanation. While these powerful Frankfurt Jewish families indeed pursued a deliberate strategy of marrying among their own circle during the sixteenth century (and with leading families in Worms and Friedberg, and elsewhere), it was their social prestige and long term experience in governing, their political and institutional knowledge of how the Frankfurt city council governed that gave them an edge in retaining positions of power within the community. Individuals from less powerful Jewish families had little or no chance of displacing these people from their prominent positions (395-6). Despite periodic challenges, these families retained their power, influence and control within the Jewish community of Frankfurt throughout the period under discussion. Their dominance within their own community, in turn, helped ensure their continuing economic opportunities and influence (399).

I found the book particularly interesting for several reasons. First, the author's treatment of her subject will open a path for future research, given the extraordinarily rich and deep source collection in the Frankfurt Institut für Stadtgeschichte and the regional Hessian archives. While some Judaica records were destroyed during the war, a wealth of records has survived and has only begun to be exploited in the interest of German Jewish history. Secondly, her profiles of the elite families themselves are inherently useful and interesting. The author's portrayal of the role of Sara Drach in her series of appeals to the city council and her efforts to mobilize community support on her husband's behalf are especially interesting. Sara's efforts were not typical behavior for a woman then, but they illustrate the possibilities that an extraordinary woman had even in the patriarchal society of those times. Finally the author's fine efforts at providing context for the conflicts internal to the Jewish community shed important light on how the non-Jewish authorities themselves were at odds over how to deal with Frankfurt's Jews. The Frankfurt city council wished to preserve its autonomy and its monopoly of power over the town's Jews, while the Holy Roman Emperor sought to use Jewish questions to expand his own influence over the town. This fundamental conflict over authority forms part of the background to both the Fettmilch Uprising and its suppression and the conflict between Isaac Kann and Samuel Drach during the 1670s and 1680s. The latter conflict went on for as long as it did in part because of the conflicting interests of outside parties, which also could not be easily resolved.

The books' most fundamental weakness is structural. Its central chapter is 240 pages long, and it mixes material that could be better set off. Since the author's most important themes are conflicts among elite families and between them and the city council, she could have organized her material more topically rather than chronologically. Single chapters on the Fettmilch Uprising, the impact of the Thirty Years War, and the Kann-Drach conflict would have provided readers with smaller portions to digest. The conflicts between Jews and between Jews and non-Jews (sections 3.1-3.2, 95-109) could also have formed their own chapter.

This book is a fundamental contribution to the Jewish history of early modern Frankfurt/Main, and its elite families.