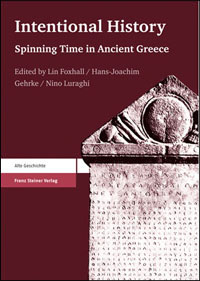 Hans-Joachim Gehrke's notion of "intentional history", the sense of the past that societies create for themselves, their subjective self-conscious categorisation, has been very influential in recent work on classical historiography and history. The papers in the current collection, originally given at a conference in Freiburg in 2006, used the phenomenon of "intentional history" as a starting point to explore some of the consequences in a series of case studies.

After an overview by Luraghi and Foxhall, Gehrke himself, with characteristic acumen, discusses how intentional history functions in the Homeric poems and how, during the age of colonisation, expansion and migration had far-reaching consequences for notions of the past, and in particular the need to preserve one's identity while legitimising new territorial claims led to the construction of "an interconnected web of movements and relationships", creating webs of connectivity in a process that could be called "spinning time" (22). He also discusses individual historians and the ways in which they influenced intentional history and were, in their turn, influenced by it.

The sixteen essays that follow - covering Greek lyric, vase painting, numismatics, tragedy, epigraphy, oratory, myth, and, of course, historiography - are all of a high quality, although, as often in such volumes, a few seem only tangentially related to the topic.

Luca Giuliani begins by looking at the Dipylon warriors and Dipylon shields on vases to explore whether viewers of these images had a sense of whether they were historic or contemporary images. He concludes that the viewer, although aware that a particular mythical episode may have taken place in the past, nevertheless recognised and felt a sense of fundamental continuity with those heroes of old: archaic vase painting did not include temporal indications.

Ewen Bowie looks at how early Greek poetry allude to the Trojan War and he concludes that although it did not have a monopoly on their themes, it nevertheless played a prominent role, and poets used the Trojan myth to add depth and complexity to their own poems, or, conversely, to re-evaluate Homeric ideals.

Massimo Nafisi argues that the Great Rhetra was not an early enactment of Spartan constitutional procedure but most likely belongs to the decades immediately following the Second Messenian War. It is best understood as a piece of intentional history, an attempt to fix the foundation of Sparta, and therefore marks the beginning not of the Spartan state but of the Spartan legend.

Maurizio Giangiulio looks at Delphi and Delphic oracles and concludes that foundation narratives have more to do with the "corporate identity" of the communities who created them rather than with lending divine sanction to actual historical events. It was the traditions that used oracles and not oracles that generated traditions: they originated from a variety of local contexts rather than from claims of legitimisation put forth by Delphi itself.

Joseph Skinner turns to numismatics and the question of "coined identities", and points out that coins, no less than vase painting or monumental sculpture, were sites for engaging with ideologies, stereotypes, and political machinations. He points out that coins, since they circulated (sometimes widely), might have different significances locally and abroad, and that a coin's "static image" could never be completely separated from narrative traditions.

Ralf van der Hoff compares the representation of Theseus in Attic vase painting and architectural sculpture, the one more for local and private consumption, the latter for a more panhellenic and public audience. In the latter Theseus was prominent in his connexions with other Greek heroes, and appeared as a "new Heracles", while in vase painting the images of Theseus were more complex and the hero serves as an important element in Athens' internal debate about its own values: here we have not intentional history but intentional histories.

Kurt Raaflaub examines the "intentions" - the ulterior motives - that historians pursued in writing history. Historical truth did not mean the historian's lack of personal engagement: Tacitus, e.g., desired not an "impersonal or impassionate truth", but to unmask ideology, to convey a deeper reality. A similar aim can be seen in Thucydides, who develops general patterns, and Herodotus, who connects present and past to provide orientation.

Renate Schlesier treats the remembering (and forgetting) of Dionysus and the poetic use of Dionysiac memories. These tragic memories can be organised as place (landscapes of memory), as ritual (participation in past Dionysiac rituals), and as role-model (using the paradigm of Lycurgus, the prototypical enemy of menads). Commemorating Dionysiac features in tragedy is a way to think about assumptions about human experience with the divine.

Stephen Lambert examines what light inscriptions cast "in their own right" (his emphasis) on the city's process of re-creating the past. He notes that 4th-century decrees often have an explicit intentionality, connexions being made not only conceptually but also physically: the Acropolis becomes an important focus in the Lycurgan period for the paideutic engagement with the past.

Ian Worthington focuses on the story of Alexander's destruction of Thebes in 335. Whereas in later accounts the blame falls squarely on Alexander himself, the accounts in contemporary orators assign blame directly to Demosthenes, and Aeschines and Deinarchus rewrote history specifically to slander Demosthenes.

Nino Luraghi examines several honorary decrees as monumentalised narrative texts that articulate a specific authorised version of the past. He argues that the demos, by listing the benefactor's deeds and mindset, reaffirmed its own code of values and set a standard for future actions by its citizens. The Athenians recognised that the monumentalised decree could stabilise for the future the demos' version of past events.

Kostas Buraselis looks at city foundations, especially Seleukeia on the Tigris and Antiocheia in Syria. In these one finds divine directives at play, and dreams also figure prominently in foundation narratives. In the Hellenistic period, monarchic foundations were adjusted to the traditional pattern of Greek colonisation, since tradition for the monarch was an "ideological buttress and serviceable camouflage of his overriding power".

Tanja J. Scheer examines the use of Arcadia in foundation myths as intentional history in Roman imperial times. The Arcadians, not part of the original era of Greek colonisation, later had ascribed to them colonising activity in mythical pre-history, where their reputation as autochthonous and their role in the development of civilisation were seen as desirable traits. Traditional mythological figures were manipulated to create connexions in newly established cities, and figures who previously played no role in Greek myth were suddenly elevated to important status.

Nicola di Cosmo treats the way in which nomads were treated in Han historiography. Amongst other things, he contrasts the portrayal of the Xiongnu by the historian Sima Qian, a portrayal that was nuanced and largely accurate, with that of Ban Gu whose depiction was intended to confirm traditional views about "barbarians". These twin modes, "ethnographic" and "culturalist" were the dominant ones for the portrayal of foreign peoples.

Jonas Grethlein employs a phenomenological model of the idea of history and examines the ways in which human beings employ commemorative strategies about the past. His examination of the Glaucus / Diomedes meeting in Iliad 6 shows how various strategies for connecting past and present - such as the use of traditions to establish continuity or the employment of exempla to determine appropriate behaviour - play out in the episode, and how the poet recognises not only these but also the role of chance which adds insecurity to the human condition.

Overall, then, the book is an excellent contribution to the ongoing discussion about intentional history and also the many ways in which the ancients thought about and constructed their history. It is unfortunate that so fine a volume has more typographical errors and missing bibliographical items than one would like to have seen.