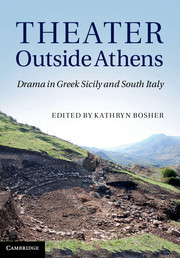 Theater outside Athens is an important contribution to the growing bibliography on ancient theatre in the wider Greek world. The interest of the collection lies not only in its determined focus on the West and wide chronological spectrum (archaic to Hellenistic) but also in the variety of methodological angles and approaches pursued. Literary texts, vase paintings, and archaeological documentation are all put to use to shed light on specific aspects of theatrical culture in the western Mediterranean, while papers are mostly 'paired', so as to present different (or complementary) perspectives on the same issue. The volume is organized in three sections, which roughly reflect chronology and type of evidence used.

The first section ('Tyrants, texts, and theater in early Sicily') opens with two papers that provide the broader historical and literary context for the emergence of theatre in the West. In a splendid discussion of settlement models, J. Hall emphasizes the shortcomings of a 'colonial' model in the emergence of distinct cultures in the West; K. Morgan offers a survey of Western (Sicilian) performers and performance traditions, from the archaic period to Deinomenid Syracuse, that at the same time highlights the interconnectedness of the Mediterranean world and stresses local peculiarities.

Two papers on Epicharmus follow. A detailed analysis of two longish fragments (resulting incidentally in a new interpretation of the Odysseus automolos) leads Willi to propose that 1. the social functions of Epicharmian and Aristophanic comedy are similar, but 2. that the 'canonical counter-discourse' recognizable in Epicharmus' Homeric parodies (and more generally in the fact that comedy emerged as the dominant communal genre in early fifth century Syracuse) betrays a 'colonial' dimension absent in Aristophanes. [1] For her part, Rodrίguez-Noriega Guillen seeks to contextualize Epicharmus' activity within a broad literary and philosophical background. She thus discusses the influence of the epic and lyric tradition, contacts with Aeschylus, and finally the philosophical background of Epicharmus' activity. Here, she explicitly takes issue with Willi on the importance of Pythagorean influence, which she tends to minimize.

Next comes a pair of papers focused on Athenian tragedy and its connection with Sicily. Bosher reviews the case for a first performance of Aeschylus' Persians in Syracuse in 476 BCE (a point that cannot be proven; not all of Bosher's arguments carry equal weight); Smith advances hypotheses as to the genealogical reworking of the traditions concerning Xuthus in Aeschylus' Aetneae and in Euripides' Ion. Both papers thus attempt to retrieve Western themes and motivations in what is usually considered 'Athenian' drama. The focus then shifts onto Dionysius I, tyrant of Syracuse and dramatist: Monoson offers an interesting paper on Sicilian theatrical echoes in Plato's dialogues (the Republic, but also the Gorgias); Duncan proposes a close analysis of the very few fragments we have of Dionysius. Here, as with Bosher's paper, engagement with the workings of the biographical tradition would have been important. [2]

The second section of the volume ('Stone theaters, wooden stages, and western performance traditions') gathers contributions that rely mainly on archaeological material. First, the theaters themselves. In a survey of classical and Hellenistic stone theaters in Sicily, Marconi emphasizes - against the 'grand narrative' which has linked the construction of the stone theatre at Syracuse to Hieron and the performances of Aeschylus' and Epicharmus' plays - that the archaeological data speak for a later date. Thus, most theaters excavated so far either date to the revival of Sicily under Timoleon (this is the case of the theater of Montagna dei Cavalli, ancient Hippana, presented in detail by its excavator, Vassallo), or to the third-second century BC, after the transformation of Sicily into a Roman province. Marconi further stresses the political function of theatres, documented by literary sources, but visible also at the topographical level, in their frequent association with the space of the agora.

After the structures, their (Western) images: in a set of four tightly interconnected papers, Taplin and Todisco discuss images of tragedy on vases, while Dearden and Green focus on comic pots. Taplin concentrates on transmission of Attic drama, which he links to performances by travelling troupes, including to non-Greek Western audiences; Todisco focuses specifically on non-Greek reception of mythological images, and argues for an exclusively funerary context, in which the role of intermediaries that explain the meaning of the vases in relation to their funerary uses would have been played not by 'funerary orators', as proposed for instance by Giuliani, but mainly by the painters themselves. [3] This seems to me to beg a fundamental question: why should non-Greeks want to put vases with images apparently totally disconnected from their own culture into their tombs, if they have no acquaintance at all with the topics illustrated? And in fact, Dearden argues that in numerous instances the iconography of 'comic' vases, which cannot be explained through reference to Attic Old Comedy, implies the existence of a local comic production. Green's extremely detailed analysis of the various iconographic schools and of variants in (say) the portrayal of the various types of wooden stages further anchors these vases in local performance culture. The issue underlying all four contributions is that of the meaning of these images for local audiences. The funerary context from which the vases come is of course important (it is on this 'chthonic' aspect that Lachlan focuses, in a paper that covers a lot of ground without really coming together, from the terracottas of Locri to those of Lipari, from transition rituals involving Kore/Persephone to funeral rites). And yet, the whole issue could fruitfully be reexamined in light of Revermann's proposal to see in the symposion the main context of these vases (a symposion that may also be on occasion a funeral feast); his emphasis on what he calls 'the privatization' of the theatrical experience, in the specific sense of 'a fragmented recontextualization [...] by individuals or troupes to small homogeneous groups with strong socio-economic and ideological bonds', makes a lot of sense in the South Italian context. [4] Along these lines, at the end of his paper Taplin suggests that influential families of Ruvo and Canosa may have commissioned performances of a play (possibly in adapted version, without choral parts), for special occasions, such as a particularly prestigious funeral.

[1] The contrast set up by Willi between Epicharmus and Aristophanes does not take sufficient account of the chronology: in the last third of the fifth century it made sense to parody tragedy rather than Homer; not so in the first half of the fifth century. Comedy lives on cultural counter-discourse, certainly, but the choice of Homer versus tragedy as the butt of parody does not in itself imply a colonial dimension.

[2] See now the excellent treatment by J. Hanink: 'The Classical Tragedians, from Athenian Idols to Wandering Poets', in: I. Gildenhard and M. Revermann (eds.): Beyond the Fifth Century: Interactions with Greek Tragedy from the Fourth Century BCE to the Middle Ages, Berlin/ New York 2010, 39-67.

[4] M. Revermann: 'Situating the Gaze of the Recipient(s): Theatre-Related Vase Paintings and their Context of Reception', in Gildenhard and Revermann cit., 69-96.