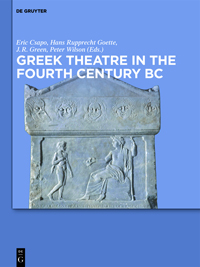 This is a monumental volume - and not just in terms of its weight, size, and lavish illustrations; the quality and breadth of the papers make it a must read for anyone interested in fourth century theatre. The introduction gives an overview of past research into fourth-century theatre; four sections provide in-depth coverage of, respectively, archaeological aspects, tragedy and comedy, performances outside Athens, and finance and records in Athens.

The highlight of the first section is probably Christina Papastamati-von Moock's discussion of "The Theatre of Dionysus Eleuthereus in Athens" (15-76). New data from excavations and a careful re-examination of the evidence allow her to reach important new conclusions, such as the fact that the architectural conception of the semi-circular theatron belongs to the Periclean period, while the construction of the stone theatre must have begun ca. 350 BC, before Lycurgus. Furthermore, a detailed analysis of the 'foundation T' and blocks that carried revolving elements leads Papastamati-von Moock to argue that the basic forms and functions of the Periclean skene were retained in the Late-Classical stone remodelling of the theatre and into the Hellenistic period. As she points out, this confirms "the central symbolic role played by palaia tragodia in Athenian theatre production" (72).

With the next paper, the focus shifts to the theatres of Attica: Hans Rupprecht Goette ("The Archaeology of the 'Rural' Dionysia in Attica", 77-105) gives a list of deme theatres and discusses their location and function. The detailed catalogue of evidence (inscriptional and archaeological) is very useful, while the paper has the merit of engaging with, and challenging, some of the conclusions reached by Jessica Paga; [1] the two papers will have to be read together. Jean-Charles Moretti rounds off this section with a tour-de-force on "The Evolution of Theatre Architecture outside Athens in the Fourth Century" (107-137); a highlight here is the discussion of Macedonian theatres, with the intriguing suggestion that the origin of the modification of the stage-building in the third quarter of the fourth century might possibly be sought in Macedonia.

The second section opens with a - very speculative - paper by Oliver Taplin, on "How Pots and Papyri Might Prompt a Re-Evaluation of Fourth-Century Tragedy" (141-155). To recover something of the literary quality of the lost fourth-century plays, Taplin links TrGF 1 Astydamas 60 F 1h, TrGF adesp F 649 and an Apulian red-figure krater in Berlin, and reads Astydamas' work as extremely sophisticated, innovative in both dramatic and metrical techniques. Similarly, the connection he proposes between an Apulian red-figure krater in Princeton, a musical papyrus, and Carcinus' Medea paves the way for important inferences on the spatial organization of the play.

Sebastiana Nervegna ("Performing Classics: the Tragic Canon in the Fourth Century and beyond", 157-186) looks at the theatrical reception of the canonical three fifth-century tragedians. Sidestepping the debate on the relationship between Apulian vases and Greek theatre, she shifts the perspective, setting these same Apulian vases against Roman Republican tragedy. These are fascinating pages: Nervegna shows very convincingly how vases and Roman tragedies can illuminate each other. She is also very good at highlighting differences in the reception of the tragedians in mainland Greece and in the West, and at emphasizing that Athenian-centred tragedies fared well in Western Greece - as did that other Athens-centred genre, Old Comedy.

Divided reception is also one of the themes of Andrew Hartwig's paper on "The Evolution of Comedy in the Fourth Century" (207-227); Hartwig further suggests that fourth century comedy thrived because, unlike tragedy, it remained free from any expectations of having to live up to the legacy of its fifth-century predecessors. [2]

Finally, Johanna Hanink ("Literary Evidence for New Tragic Production: the View from the Fourth Century", 189-206) makes a very successful attempt at understanding why the fourth-century evidence (mainly comic poets, Aristotle, and Athenian orators) led earlier generations to the assumption that dramatic production went into decline during the fourth century. Her main point is as simple as it is compelling: references to tragedy in fourth-century comedy are to fifth century plays, or remain generic, because by then theatre had spread, and comic audiences elsewhere could not be expected to know the latest Athenian play. Similarly, if Aristotle mentions mostly fifth-century plays and authors, it is because these were known to the broadest audience, not because fourth-century plays were bad. Fittingly, Hanink closes on the tussle around the honours and statue awarded to Astydamas, which shows the extraordinary popularity of this fourth-century tragedian.

Eoghan Moloney kicks off the section on performances outside Athens with an excellent paper on "The Macedonian Kings and Greek Theatre" (231-248). Macedonian kings, he argues, sponsored Greek theatre for Macedonian reasons, establishing their own performance contexts; the make-up of theatre audiences in Macedonia may have reflected (and helped further define) hierarchies in the kingdom. Macedonian theatre is also at the centre of the next two papers: Brigitte Le Guen looks in detail at "Theatre, Religion and Politics at Alexander's Travelling Court" (249-274), while Vayos Liapis proposes that the Rhesus was composed at the court of Philip II or Alexander by a tragic actor, possibly Neoptolemos, with a Macedonian audience in mind (275-294).

Two very sophisticated discussions of theatre in the West follow. Zachary Biles and Jed Thorn rethink "Choregic Iconography in Apulia" (295-317), offering, among other things, a fascinating interpretation of the 'man-with-mask' motif on Apulian vases; they conclude that Apulian artists use choregic iconography not for its original purpose (of evoking Athenian culture, or dramatic performances) but for its ability to speak to the beliefs, hopes, and values of its end-users. Edward G.D. Robinson discusses "Greek Theatre in non-Greek Apulia" (319-332): comparison with Macedonia highlights the possibility of theatrical performances at banquets; theatre is produced primarily for an elite, and serves to define social and political divisions.

J. Richard Green's lavishly illustrated paper on "Regional Theatre in the Fourth Century" (333-369) focuses on terracotta figurines from Boeotia, Corinth, and Cyprus (as well as some red-figure fourth century ceramic from Corinth), revealing very diverse worlds: in Boeotia, it is possible to detect an effort to preserve local traditions; Corinth seems to have been a hub, influenced, of course, by Athenian comedy, but maintaining strong links with the West; as for Cyprus, if in the early fourth century its production of theatrical figurines has specific character and preferred themes (travellers), by the end of the fourth century the island is part of the mainstream. Edith Hall and David Braund round up this section by putting together the rather scarce remains of theatrical activities in the Black Sea region (371-390).

The last section is unashamedly Athenocentric: Benjamin W. Millis gives a useful overview of the "Inscribed public records of the dramatic contests at Athens" (425-445: the lists known as Fasti, Didascaliae and Victors' List) [3], while Eric Csapo and Peter Wilson offer a rich discussion of "The Finance and Organisation of the Athenian Theatre in the Time of Eubulus and Lycurgus" (393-424). Beyond a number of fascinating ideas and proposals, Csapo and Wilson manage to show very convincingly that theatre at Athens in the second half of the fourth century was big business. [4]

Most of the papers are innovative and thought provoking, with the best ones opening up new avenues for research. Not the least among the many merits of the volume is the high degree of coherence among the various parts, with themes and ideas resonating across the contributions, explicitly and implicitly. Detailed indices close the volume, facilitating its use.