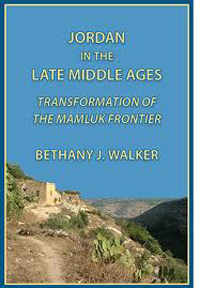 Entangled history (histoire croisée) became a hot topic during the early 2000s. [1] This turn in historiography has to do with globalisation and the search for trans-national history. [2] Among other technical terms, this search for new methodology coined the locution "global moment", which is defined as "a specific event that had at least some degree of impact on most societies in the world, and the global movements connected to them. These were events of a popular significance that appealed to people in discrete and distant locations."[3] Bethany Walker, in Jordan in the Late Middle Ages: Transformation of the Mamluk Frontier, sees the history of post-bubonic plague Jordan (after c. 1350) through this prism.

Four elements shaped the Mamluk administration of a considerable part of the territory that is recognized nowadays as "the Hashemite Kingdom": the heritage of Saladin's struggle with the Latin Kingdom of Jerusalem, the contemporary geographical imagination, the internal politics of the Mamluk Sultanate and strategy of the inhabitants of Cairo's Citadel. The importance of controlling the road from Damascus to the Holy Islamic Cities in Arabia, which cuts across Jordan, cannot be underestimated. It yielded symbolic capital that no governor or sultan could afford to lose. Kerak, the Fortress of the Ravens, was designated to serve as a haven in case of a renewed Mongol attack. The development of sugar plantations in the northern Jordan valley provided Damascus with incomes that encouraged governors to spend a considerably long period there.

The author, who builds on the Annales paradigm/Braudelian methodology of the longue durée that combines the study of geography with history of events, defends her research strategy by illuminating the potential contribution of a provincial/marginal region to the history of the centre and of world systems. Following Suraiya Faroqhi's "history from the bottom up", she argues that "global history must begin with micro-history". [4]

The detailed and long register of written sources seems to cover almost all the chronicles that deal with the period investigated in the book under review. The list contains the major chronicles [5], secretarial manual [6], biographies and documentary sources. It is supplemented by material sources. The author assumes, rightly, that archaeological studies and reports provide a sophisticated key to decipher the silent past. Based upon these archaeological findings and written sources, she provides a detailed description of the Mamluk towns, major villages, economy and religion. This is a good survey of the historical geography of the lands east of the Jordan River. It is followed by an analysis of the political bureaucracy of the region.

Chapter two, entitled "Mamluk administration of Jordan", focuses on the rural territories of Irbid, Ajlūn and Kerak. Political contacts with the Bedouin tribes who roamed along the Hajj route were of crucial importance, at least from a Cairene point of view. Yet this reality and the agricultural potential of irrigated and dry farming did not upgrade these regions geographic and administrative peripheral status.

However, the labelling of migration of scholars and of siphoning off incomes and resources as "a colonial economy" seems to be slightly anachronistic. [7] A second reservation concerns the assumed Aramaic origins of the name al-Sawād (black land). Can this popular explanation of the name for the basaltic region of northern Jordan stem from local patriotism and politics of identity? It is worth to mention that the same Arabic word is used to designate the alluvial land of Iraq.

Chapter three ponders upon Mamluk society in Trans-Jordan and Idumea. In it, the author elaborates on the tribal forces and their power, the structure of the towns and the building of villages. A long section provides an in-depth analysis of a dozen of Haram documents from Jerusalem, which mention places in Jordan. A second bulk archival documents that illuminate the Christians of south Jordan was discovered in St. Catherine in Sinai. Due to the scanty descriptive information [8], only two complete waqfiyyāt were preserved, and so she draws mainly on archaeological projects.

Following an account of the juridical dimensions of the rural communities' lives, Walker turns to dwell upon local practices of the villagers. She mentions here several agricultural compendiums: Manābij al-Fikr by al-Waṭwāṭ [9], Miftāḥ al-Rāḥa by al-Dimašqī [10], and JāmiʿFarāʾd al-Malāḥa by al-Ġazzī. [11] Subsequently she discusses the iqṭāʿ system, the agrarian administration and the sugar plantation in the Ghour. The section on settlement shifts presents the author's thesis that migration was a natural component of the cycle of peasant life. This is a valuable contribution to the social history of Mediterranean farming communities.

Chapter four's title hints at its topic: an economic history of Mamluk Jordan. This part relies on two contemporary sources, al-Maqrīzī and al-Asadī, and, in addition, to studies of pious endowments. The scope in size and number of the awqāf and the growth in privately-owned rural property led to a sharp decline in the income of the sultanate's treasury, but a different point of view is taken by al-Balāṭunisī. Walker provides a long and detailed study of his treatise and other legal compendia and, returning to the topic of endowments, provides a comprehensive study of the awqāf. Her conclusion is that the thesis of decline should be replaced by a careful investigation of economic shifts.

The concluding chapter concentrates on the Mamluk legacy. The Ottoman victory in northern Syria and their advance towards Cairo had no direct impact on the farmers and nomads of Trans-Jordan. The new empire's reshaping of local traditions in this remote peripheral zone was a long process. As in other parts of their state and in line with other imperial traditions, the Ottomans conducted a census in Jordan soon after their arrival. The author emphasizes, rightly so, the importance of this source both for information it provides from the pre-Ottoman era and for the evaluation of the new developments. It seems to this reader that a short account of the local power, represented by the biography of Ibn Sāid al-Ghazzāwī, would enrich this section. [12]

These few remarks do not belittle the great value of the book, which combines archeology with historical documents and narrative sources. The fluid text is written in a very clear style. Students of rural history and Mamluk society and economy will find it a useful reconstruction of a rather marginal territory. Focusing on this periphery, Bethany Walker succeeds in restoring broken popular artifacts and in wiping the dust from remote villages.

[1] Michael Werner / Bénédicte Zimmermann: Beyond Comparison: Histoire Croisée and the Challenge of Reflexivity, in: History and Theory 45 (2006), 30-50.

[7] Eliyahu Ashtor: The Venetian Supremacy in Levantine Trade: Monopoly or Pre-Colonialism?, in: Journal of the European Economic History 3 (1974), 5-53.

[11] A manuscript of it is in Damascus. This book was transmitted by ʿAbd al-Ġanī al-Nābulsī.