Judith Middleton-Stewart (ed.): Records of the Churchwardens of Mildenhall 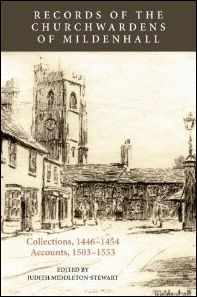 The town of Mildenhall in Suffolk, located east of Cambridge in the fen country, belonged to the abbey of Bury St Edmunds since the eleventh century. Its large church, St Mary's, dates primarily from the thirteenth and fourteenth centuries, with fifteenth-century additions, although there had been an earlier church on the site. This volume includes many of St Mary's records from the late Middle Ages and the period of the English Reformation, as edited and translated by the late Dr. Judith Middleton-Stewart, who lived as a girl in Mildenhall and attended St Mary's. Her affection for the church and town are evident throughout.

The records here edited provide a window into the world of a prosperous English parish in the fifteenth and sixteenth centuries. Mildenhall was then a thriving market town, and its churchwardens, who maintained the church and provided for its upkeep, kept records both of income and of expenditures. Most of these records are long lost, as is the case with nearly all English churches, but enough survive to provide an intriguing glimpse of how a late medieval church functioned. The "collections" of the title were records, week by week, of how much money was taken in from the offerings, usually only a few pence; nine years of these records survive. The "accounts", more informative, detail both income and outlays over a fifty-year period (with some gaps). Appendixes provide additional fragmentary accounts from the years 1554-1558, derived from now-lost accounts that were partially printed in the nineteenth century, and also a selection of fifteenth- and sixteenth-century wills.

The long introduction provides a history of Mildenhall and of St Mary's, illustrated by photographs, plans, and maps. Middleton-Stewart provides lists of known ecclesiastical office holders in the fifteenth century and explains the difference between the vicar, that is the person appointed and paid by the abbot of Bury St Edmunds supposedly to act as local priest, and the parish priest, who in practice usually served that function for him. She also details the nine religious gilds associated with the church, what would be termed confraternities on the Continent. Especial attention is given to the church itself, its construction program, its chapels, its cemetery, and its bells. Here is also a discussion of the types of furnishings typically found in a late medieval church, such as books, vestments, and altar vessels. The introduction also briefly summarizes the functions of the churchwardens, members of the parish who while (usually) not priests collected offerings and testamentary gifts to the church and determined how best to spend them (lix-lx). It would have been useful to have more information on the churchwardens' background and how they were chosen, for the benefit of those not familiar with late medieval English church organization.

The "collections" record rather dryly the amount received each week in offerings from Mildenhall High Town and outlying hamlets, though they also include occasional mentions of bequests or of income from what Middleton-Stewart translates as a churchale (potacio), the church raising money through a dinner, drinks, and probably entertainment. The "accounts" are both longer and more valuable, because they detail what the churchwardens spent money on as well as the sums they collected. At the beginning of the sixteenth century expenditures both great and small were recorded, such as repairing a bell wheel, doing laundry, or giving the organist his wages. With the onset of the Reformation, the accounts also included expenditures for such things as breaking up the medieval stone altar - to be replaced by a communion table - the erasure of Thomas Becket's name from liturgical books, and expunging the text of a papal pardon from the church wall (85), as well as more traditional payments for such things as a new bell rope or the services of a locksmith.

Some of the most fascinating material, however, is found in the wills, where the dying give what is apparently a complete inventory of their possessions, specifying who is to receive each individual object. For example, the will of a thatcher from 1559 indicates that he owned (among many other things) four silver spoons - to be divided among one son, two godsons, and a goddaughter - three houses, a cupboard in the parlor and a cupboard in the hall, both a black coat and a blue coat, a plow, a good deal of stockpiled grain, and livestock that included a cow named Mother Costyn and another named Mad Crowne (176-78).

At first glance this volume would appear to be of interest solely to those already engaged (either as scholars or as amateurs) in the history of Suffolk - the members of the Suffolk Records Society who will have received this volume for the bargain price of £12.50. There are few comparisons with churches in other parts of England and essentially no hint that anything comparable might have existed on the Continent. But it would be a shame for this book to be known purely in Suffolk. It can reveal a great deal about the normal interactions between a late medieval church and its parishioners, who contributed to the weekly offering collection, made bequests in their wills, were paid for chores ranging from doing masonry work to washing the surplices to glazing windows to repairing the church gate, might receive assistance if destitute, and were ready to enjoy themselves at a churchale. The chief difficulty with the book as a scholarly resource is that Middleton-Stewart translated everything that was in Latin into modern English, requiring anyone closely studying the fifteenth-century wills or "collections" to go to Bury St Edmunds to consult the originals. Those records in Middle English, however, have been only lightly modernized, and the book provides a helpful glossary of unfamiliar terms.