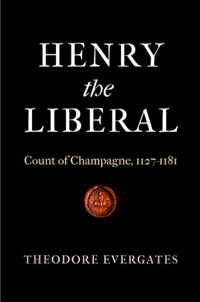 Theodore Evergates is one of the leading authorities on the aristocracy of the region of Champagne in the twelfth and thirteenth centuries. Over the years he has edited cartularies, reconstructed genealogies, and analyzed the nature of fiefs, property holding, and relationships within a family. Here he gives a biography of Henry the Liberal, the count who was one of the leaders of the Second Crusade and who essentially created the county of Champagne.

The book might appear as a work of political history, which indeed it is, but it is a political history that is not limited to the governance of kings. King Louis VII, the count's almost exact contemporary, appears throughout the book, but Evergates demonstrates that one needs to focus on the counts and dukes of medieval France as well as the kings to understand the wars, alliances, quarrels, and agreements that marked the period. In addition, his narrative combines ecclesiastical with secular history, which would have seemed a self-evident approach to twelfth-century thinkers, even if historians of the twentieth century often tried to distinguish them.

Henry the Liberal is curiously little known, given his significance. He did not have a medieval biographer, as Louis VI had Suger. If he is mentioned at all by modern scholars it is as a generous and literate man, traits his obituary notices stressed. But he was one of the most well connected men of his generation. His uncle was king of England, his wife was daughter of the French king, and his siblings included an archbishop, two counts (one of whom was also royal seneschal), a queen, two duchesses, and two countesses. He had close relatives from northern England to Paris to Burgundy to Lorraine to southern Italy and was well acquainted with contemporary religious and secular leaders, including kings, popes, and emperors.

In this book Evergates follows Henry chronologically, devoting one chapter to each stage of his life. Appendixes list Henry's household officials, canons who served the count in multiple churches, regional bishops, and a chronology of Henry's life. The work is based heavily on the 550 surviving acts of the count, the publication of which was finally brought to fruition by Michel Bur. Evergates has also immersed himself in the chronicles and letters written in northern France during Henry's lifetime and has consulted all relevant secondary literature.

Evergates clearly finds Henry an engaging figure; the count comes alive in this account. For example, Evergates notes the charming detail of the first appearance of Henry's signum on a charter, when he was still a little boy. He gives Henry credit for creating Champagne as a strong principality, with a vibrant economy, within the French state, a principality that flourished in harmony with, rather than in opposition to, the crown. Henry's death at the age of fifty-four, a week after his return home from a debilitating trip to the Holy Land, is a sad event.

The book is the product of years of research, and on almost every page there is an incident or a story that even those well acquainted with northern France at the time may not have known but are quite revelatory of the complexity of politics and alliances at the time. For example, we are told (12) of the jewels King Henry I of England had acquired, which King Stephen (Henry the Liberal's uncle) gave his brother Thibaut in return for Thibaut giving up claims to the English throne. Thibaut in turn gave these jewels to Bernard of Clairvaux to thank him for settling his quarrel with the French crown, and Bernard sold them to Suger of St.-Denis. Suger gleefully recounted how many different jewels he had received, and at such a low price.

Similarly, Evergates tells us that Henry II of England came close, at the age of thirteen, to being engaged to a very young Marie, daughter of Louis VII and Eleanor of Aquitaine. Instead, of course, Henry II ended up marrying Marie's mother Eleanor, while Henry the Liberal of Champagne married Marie. In addition, Henry the Liberal's younger brother was one of those who pursued Eleanor after her 1152 divorce in the hopes of marrying her himself, but instead ended up marrying Eleanor's other daughter, Alice.

Biography used to be a much more common historical genre than it has been recently. Evergates's work is part of a new trend in biographies, not intended to tell the great deeds of great men so much as to find a well-documented, inherently interesting man or woman and use them as the center point for a discussion of politics, religion, and social structures. Other relatively recent works of this sort include Kimberly Lo Prete's Adela of Blois (2007), on Henry the Liberal's grandmother, and Fredric Cheyette's Ermengard of Narbonne (2001), on a contemporary of Henry's.

Without having to be didactic, Evergates is able to present a powerful twelfth-century lord who is much better educated, much more informed about both religion and church politics, and overall much less crude than aristocrats were once portrayed. Women are far more active figures in this biography than they were once assumed to be. The "male Middle Ages" of Georges Duby has finally, one hopes, been put to rest.

Principally Evergates's Henry is presented as an example of what state-building really was like in the twelfth century: not just conquering the most territory, and not just evoking patrilineage and primogeniture. Rather, both Henry and his father Thibaut consolidated a coherent territory and concentrated on its economic development, rather than on conquest. Henry's father began the process, expanding the number of Champagne fairs and dividing his far-flung territories between his sons, giving Henry Troyes and adjoining counties (the Champagne region) while giving Blois-Chartres and Sancerre to his younger sons. He also established excellent relations with the Cistercians; Clairvaux was located in his county of Troyes. But Henry went far beyond his father's accomplishments. He was among the first French counts to draw up a systematic account of all the lands and castles held in fief from him, which he did when preparing to depart for Jerusalem in 1178, leaving Champagne to be administered by his wife.

One of Henry's most notable projects was to rebuild the city of Troyes as his capital, starting with a new comital palace and an adjoining chapel, served by over a dozen canons. The importance of this city, a center for international trade fairs, is underscored by his choice of the title "count palatine of Troyes" out of the various titles available to him. In spite of some tensions with the bishop of Troyes, he made the city a center of secular as well as religious governance. Here he resolved disputes both between laymen and between churchmen and laymen. His chancery was kept busy during his thirty years as count, writing and sealing accounts of gifts, settlements, and confirmations.

This book will surely be the definitive biography of Henry for decades to come. Maps, family trees, and illustrations of Troyes make it easy to appreciate the world in which Henry moved. The book is convincingly argued, thoroughly documented, and a real pleasure to read. It is a triumphal capstone to Evergates's years of scholarship.