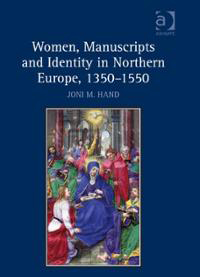 In her book "Women, Manuscripts and Identity in Northern Europe, 1350-1550", Joni M. Hand seeks to explore not only women as patrons and owners of devotional manuscripts, but also the way in which such books were used by women to communicate their identities. Whether the message had to do with political power or alliances, piety, the ideals of femininity and motherhood, or education and literacy, these Valois noblewomen clearly used this medium, one of the few available to them, to express their views and highlight certain facets of their identity. Hand's focus on "identity" offers a particularly nuanced consideration of how these devotional manuscripts - primarily books of hours, as well as some psalters and breviaries - could be manipulated to reflect political or social concerns. This well-illustrated book, though lacking in any color images, makes a significant contribution to the extant scholarship through Hand's extensive research into inventories and other records, creating a solid survey of devotional manuscripts belonging to or commissioned by female patrons in this period.

In her first chapter, Hand introduces her readers to the female book collectors of the Valois courts, consolidating specific details about fifteen different women and the books associated with each. The author has been able to connect several generations of women with the books they commissioned, owned, or inherited, highlighting the diverse trajectories of these books over time, and bringing attention to those collectors who were particularly passionate about books.

In chapter two she investigates the many ways in which women expressed their identity through patronage, including their choices about which artists they employed, the language used, or the prayers and specific saints chosen for inclusion. She then looks more closely at how the images in these manuscripts were employed to communicate facets of identity.

In chapter three she looks closely at portraits, coats of arms, and marginalia to make the argument that all of these visual components speak to the unique choices and intentions of specific commissioners and owners.

Finally, in her last chapter she considers the way in which such manuscripts were used explicitly for education through generational transference. Here she engages with the motifs, increasingly popular, of St. Anne, Mary's mother, as well as the Virgin herself, shown reading and teaching their offspring. This iconography was most certainly used as a model for motherly behavior and reinforced the responsibility of women to teach their children.

The most significant contribution of this book is the sheer amount of research that went into its writing. Although there has been a good amount of important scholarship done on medieval women, literacy, and book culture in the last thirty or so years, it is clear that this work has only scratched the surface of a rich field. Hand discusses over thirty different aristocratic women and over sixty manuscripts, conducting original research to build upon the extant scholarship and offering detailed information about the practices of several relatively unexplored noblewomen. The genealogical charts in the appendix alone are extremely valuable, focusing as they do on women and their relationships to one another through inheritance and education.

Hand focuses on devotional manuscripts, which is a logical choice because of their relatively abundant survival. As she points out, they were "vehicles for expressions of ideologies" (2), as well as "multifunctional and could express issues that applied to all aspects of the noblewoman's life" (3). Nevertheless, I found myself wondering how her arguments for identity creation might have carried over into other manuscript genres or visual culture. While this book clearly has a focused agenda and specific body of source materials, it would have further strengthened the book's assertions to connect its subject matter to the wider network of both scholarship and medieval materials (both textual and artistic). It seems unlikely that manuscript production by this late medieval period was functioning in isolation; some connection to other artworks like panel painting could have further contextualized her argument and reinforced the significant contributions her book brings to the discussion. For example, it seems strange not to mention works like the Annunciation Triptych (Merode Altarpiece) when discussing representations of the reading Virgin in fifteenth-century Annunciation scenes. There is also room here for more engagement with the broader work on medieval women's literacy in addition to book ownership and patronage, and to engage more frequently with women as audiences of other genres, such as romance narratives or household and health guides.

In her conclusion, the author makes several particularly compelling observations, including one about the complexity of international relationships reflected in these books, stating that "this ancestral web shows the mobility of women in Western Europe" (213), which compelled these individuals to preserve their traditions. She also reminds us of the particularly intimate nature of books, and the close relationships they fostered with their owners. These are important assertions to come out of her research and an exploration of these aspects earlier may have alleviated the repetitive listing of names in some of the chapters, while enriching her discussion throughout.

The area of medieval women's literacy, patronage, and engagement with books and visual culture more broadly is one that warrants continued expansion, and Joni M. Hand's book undoubtedly makes an important contribution to this field. Furthermore, it also stands as a worthy model of scholarly work that straddles medieval and Renaissance or Early Modern studies. Especially in art history, these fields remain surprisingly and unfortunately distanced from one another, and projects like this one are key to alleviating this gap.