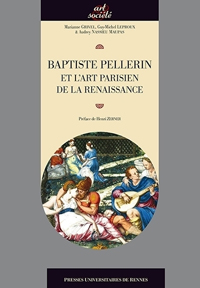 Henri Zerner begins his preface to this volume by invoking the word "resurrection", extracted from the title of the second chapter of the book. He thus pinpoints Marianne Grivel, Guy-Michel Leproux, and Audrey Nassieu Maupas' impressive achievement: the "spectacular" restaging of Baptiste Pellerin - an artist not once cited in Zerner's reference book, L'Art de la Renaissance en France. L'invention du classicism (Flammarion 1996/2002) - as a major protagonist of the Parisian art scene in the third quarter of the sixteenth century.

Be it in the introduction, in the five main chapters divided according to Pellerin's interactions with a vast array of artistic media (printmaking, manuscripts and printed books, stained glass window cartoons, goldsmithery jewelry and armor, coins and medals), or in the conclusion, the individual contributions of the three authors tend to flow into a single whole. In fact, this "resurrection" is a collective one, launched by a "journée d'étude" at the INHA in Paris in 2010 and building on earlier remarks by Georges Wildenstein, Sylvie Béguin, Margaret McGowan, George Wanklyn, and Valérie Auclair. Herein, the texts are supplemented by an annex of fifteen archival documents, ten of which were unpublished, attesting to Pellerin's activities between 1548 and 1574 (the year before his death) and by a plethora of visual documentation.

The rising star of "Baptiste", referred to as an "excellent peintre" in 1558 (15), implies the partial demise of his heretofore better known collaborator, the printmaker Étienne Delaune, from whom the vast body of drawings henceforth attributed to Pellerin has been convincingly removed (see, for instance, Ills. 4-10).

Ten years earlier, however, Pellerin had been referred to as a "maître enlumineur" (101). Hence the illuminations attributed by Myra Orth to a hypothetical "Maître des Heures Gouffier" in two major mid-century manuscripts, the Hours of Anne de Montmorency (heavily inflected by Madeleine de Savoie [1]) and those of Claude Gouffier, are reattributed to Pellerin. His manuscript book illustrations include three works for the poet Jean Vatel and four for Catherine de' Medici's apothecary Nicolas Houel, for whose shop Pellerin had also supplied ornamental pattern drawings. The latter include four drawings accompanying sonnets honoring the Queen Mother in the famed Histoire de la Royne Arthemise. Proof thus exists that Baptiste Pellerin collaborated with Antoine Caron. Another major collaborator - or rival? - was Jean Cousin [2] in the royal entry of 1549, manuscripts, and preparatory studies for armor. While Zerner (9) deems Pellerin a fertile yet lesser follower of Cousin, some of their work has been confounded (e.g. 41-43, 52-53).

Tellingly, the indexes list only names and places, not iconography or themes. Yet the French Renaissance understanding of the painter as a "peintre pourtrayeur" (88) - that is a supplier of (potentially incomplete) projects and cartoons generally executed by specialists in other fields whose fame may surpass his - constitutes a leitmotiv of this volume, and of Guy-Michel Leproux. [3] Zerner notes in his preface that this specialization distinguishes France from the Netherlands and Italy (8). Thus Pellerin's debt to Rosso Fiorentino and Primaticcio (and Luca Penni) is essentially a question of style, not practice.

Over half of the abundant illustrations adorning this book are details, chosen to buttress attributions to Pellerin and a sign of its connoisseurial slant. This approach has enabled some felicitous discoveries, such as the link established between a late drawing representing the Story of Moses and Aaron (Ill. 130, Art Institute of Chicago) and a window in the Parisian church of Saint-Merry, based on a shared pattern of tracery (143-147). Two Parlementarians, Pierre and Thierry Grassin, are then identified as patrons of the corresponding chapel.

The conclusion includes a valiant attempt to address issues of patronage and religion; but this reader hopes to glean much more regarding the historical contextualization of Baptiste Pellerin from the forthcoming volume by Valérie Auclair and Emmanuel Buron, focusing on the artist's hundreds of drawings, mostly on parchment. Pellerin's association with the most eminent figures of high royal circles, including Diane de Poitiers (and hypothetically Anet), Anne de Montmorency, the kings Henri II, François II, Charles IX, the future Henri III, and Catherine de' Medici, is clearly attested, as are his numerous associations with the Parisian financial and intellectual elite.

In the religious sphere, particularly enlightening is the detailed discussion of Pellerin's seventeen drawings of the Life of St Bartholomew (Paris, BnF), models for a tapestry cycle woven for the church dedicated to this saint on the Île-de-la-Cité. Heretofore unknown contracts offer a superb window onto a group of middle class patrons, male and female alike, most of whom are potentially linked to the goldsmith trade. It was the church wardens who chose the subject matter, though; and The Flaying of St Bartholomew was commissioned by Henri de Vimeux, one of the parish priests. Three other tapestry cartoons highlight an angel in the temple who chases demons, marks the faithful, and blesses the temple itself with a cross. This example, with the aforementioned Story of Moses and Aaron that highlights the wrath of God unleashed against rebels who had dared to contest the authority of the priest, demonstrates that Pellerin worked for militant Catholics during the crucial years of the early 1570s. The evaluation of his religious stance is far from simple, given his collaboration with the Huguenot printmaker Delaune, or the attribution to him of the conception of the rue Montorgueil print Overturning of the Big Marmite, now read as Protestant propaganda (79-81). To these examples can be added other satirical pieces such as the "Rabelais" drawings, L'Isle sonante, acquired by the Musée du Louvre. [4]

The reader closes this rich if sometimes "fastidious" (Zerner, 7) volume able to envision Baptiste Pellerin as a talented creator particularly marked by Rosso and Primaticcio. Like them his forte was disegno, yet he never benefitted from the social prestige that allowed these two Italians, but also a few French counterparts, to soar to new heights. Shaped and circumscribed by the patrons and artistic practices of the realm, Pellerin's artistic life coincided with a rigidifying of French society. My hunch is that it was broadly stitched together by a thread that ran from the early Books of Hours for Catholic patrons of the ilk of the Duke and Duchess of Montmorency to the urban base that was organizing in the parish churches of the capital to counter the ever more tense Protestant threat. Specialists will continue to bring Pellerin into better focus, proving me right or wrong.