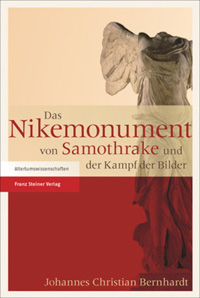 The Nike of Samothrace, newly conserved, cleaned, and remounted, is in the news.

In 2002, the Louvre embarked upon a conservation campaign, largely prompted, first, by the monument's dirty, distempered surface and the statue's cracked modern plinth; second, by the dramatic identification on Samothrace itself of the marble block that linked both ship and statue and rendered this ugly plinth literally de trop; third, by Marianne Hamiaux' authoritative series of articles meticulously documenting every aspect of the monument then available for study, proving inter alia that the Nike's largely restored right wing should angle skywards above the level of the left one, and that the notorious little block inscribed [. . . .]Σ ΡΟΔΙΟΣ could not belong to the ship or its sculptor but instead probably carried a statuette; and fourth, by a scientific provenance study of the Samothracian architectural and sculptural marbles led by Yannis Maniatis. This and subsequent work at the Louvre showed that the Nike uses no less than three kinds of Parian marble: ultra fine-grained lychnites from Marathi for her flesh and two slightly coarser and less translucent varieties for her body and wings, respectively. Her ship is blue-gray Rhodian lithos Lartios, as conjectured almost a century ago. [1]

Moreover, not entirely by coincidence, the longstanding consensus that the Rhodians had commissioned the Nike from their distinguished native son, Pythokritos, to celebrate two naval victories over Antiochos III of Syria in 190 B.C., cleverly displaying it in a rock-strewn fountain house, had largely collapsed. For by the 1990s it had become clear that this "fountain", lacking both waterproof plaster and water supply, was nothing of the sort. In 1997, Heiner Knell identified the statue as an Augustan thank-offering for the Battle of Actium in 31; in 2010 Olga Palagia attributed it to Aemilius Paullus and the Roman triumph over Macedon in 168 (even though the war saw no fighting at sea at all); and now Bernhardt has revived Aloïs Hauser's nineteenth-century theory that Demetrios Poliorketes dedicated it after destroying Ptolemy I Soter's fleet off Salamis in Cyprus in 306.

Yet Bernhardt's book is by no means the last - or even the latest - word on the subject. At a well-attended public Journée d'étude at the Louvre in March 2015, François Queyrel argued for a thank-offering for Rhodian success and prosperity in general; this reviewer, previewing a study forthcoming in the American Journal of Archaeology, proposed a victory dedication for the Bithynian war of 156-154, to which the Rhodians contributed five quadriremes detached from their ongoing struggle with the Cretan pirates; and Palagia restated her Roman theory with characteristic vigor and conviction. Of the numerous comments from the floor, the sharpest concerned the new display's disregard of the Nike's originally oblique position and three-quarter Hauptansicht. Sadly, it turns out, fire regulations forbade it, since it would have impeded traffic to and from the Sully wing of the museum.

Yet although somewhat overtaken by events, Bernhardt's book is still a must for any serious library of classical archaeology, if only for his comprehensive commentary on previous scholarship on the Nike, to which he devotes the first forty of his 145 pages. For his eccentric idea that the Nike belongs around 300, revealed on page 49, cannot hold water. Essentially, he argues that since Hellenistic sculpture cannot be dated by style, one must fall back on the Nike's "only secure parallel" (49), Demetrios's justly famous tetradrachm issue of 301-292 featuring a trumpeting Nike alighting on a warship: the basis of Hauser's old theory mentioned earlier. Unfortunately, though, Bernhardt fails to mobilize any late fourth-century sculptural comparanda whatsoever for this revanchist date. Why not? There are none.

Demetrios's coins apart, one thinks (for example) of the akroteria from the late fourth-century Temple of Artemis at Epidauros, another akroterion on display in the Athenian Agora (S 440), the dancing nymphs on several Attic votive reliefs, and a running woman on one of the plinths from the second Temple of Artemis at Ephesos. [2] Sadly, not one of them bears any resemblance whatsoever to the Nike, neither does anything from the third century. Contrast (as many have done since its discovery, Palagia most recently) the second-century friezes of the Pergamon Altar, a roughly contemporary striding woman once attributed to the Samothracian Hieron's northern pediment, and another in Athens. [3] Alongside them is where the Nike surely belongs, though its sculptor's identity and hometown remain a mystery.

To be brutally frank, in this reviewer's classes Bernhard's blatant disregard of basic art-historical method would earn any student an instant F. (Indeed, since his sole nod to it is to remark that the Nike both quotes the Iris and Artemis/Hekate of the Parthenon's pediments from the 430s, and prefigures the somewhat classicizing baroque of the Pergamon Altar of the 170s/160s, one is tempted to respond in sheer exasperation that he has simply split the chronological difference between them, but this is probably unfair.) In any case, his date ca. 300 for the Nike remains merely an unsupported, idiosyncratic, and easily countered assertion.

Doggedly determined to justify it faut de mieux, Bernhardt then constructs a rickety historical scaffold to prop it up. Starting with Demetrios's coins, and clutching at every historical straw he can, he then devotes a further forty pages to the events of the tumultuous dozen years between 306 and the king's triumphant return to Macedon in 294; and a final forty to (in my view) a chimerical "monuments war" allegedly waged between him and his rivals for control of Alexander's legacy, both on Samothrace itself and elsewhere.

En route, Bernhardt deploys elaborate arguments to quash inter alia the obvious objections that the Nike's right hand, famously discovered on Samothrace by Jean Charbonneaux in 1950, [4] is open, divorcing statue and coins; that the latter in any case clearly show a damaged and thus enemy ship; that the Nike's own ship and its base are made of marble obtained from the very island that Demetrios had failed to conquer in 305/4 (whence his mocking nickname), still his bitter foe; and that other sworn enemies of his, Kassandros and Lysimachos, dominated Samothrace during the years in question.

To summarize: Bernhardt's book is a well documented, vigorous, evenhanded, but ultimately quixotic attempt to resurrect and re-contextualize a long-obsolete theory, based on a premise that is flimsy, counterfactual, and, in this reviewer's opinion, indefensible, like the ingenious castles in the air that he proceeds to erect upon it.

[1] Although the publications mentioned in this review are too numerous to be referenced individually, most of them are now conveniently summarized and listed in M. Hamiaux, L. Laugier, and J.-L. Martinez, The Winged Victory of Samothrace. Rediscovering a Masterpiece (Paris 2015).

[4] Louvre Ma 2369 bis; donated by the Greek government to the Louvre in 1954 in exchange for other Samothracian antiquities and now on display in Paris. Its thumb and second finger, found by the Austrians in the 1870s, were donated to the Louvre by the Kunsthistorisches Museum in 1950.