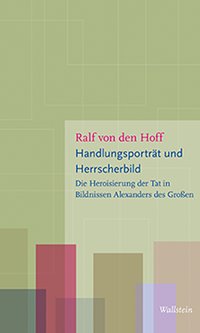 As far as I can discover (currently lacking access to any academic library, even my own), this insightful little booklet is the first focused study of Alexander's "action portraits" per se. Written in a brisk, even staccato style, and generously acknowledging the work of earlier scholars, it is the latest addition to an inexpensive series of mini-monographs published by Freiburg's Research Center on Heroes and Heroism (https://www.sfb948.uni-freiburg.de/). Addressing a broad audience, it joins a startlingly eclectic quintet on George Washington, American firemen (particularly apt for a reviewer living in fire-stricken California), Cold War spies and secret agents, heroes in pre-and post-revolutionary French literature, and the soprano and castrato hero in pre-Romantic opera.

Von den Hoff's introductory sections (7-18) open with Alexander's unique qualifications for heroization in Greco-Roman eyes: his great deeds, audacity, shrewdness, and unique achievements, which together elevated him to superhuman and legendary status even in his own lifetime. Yet the media then available, chiefly sculpture and painting, limited its visual expression to two outlets only: solo portraits and narratively embedded ones. In Alexander's case, the former included the well-known trio of Lysippos's spear-bearing bronzes (oddly, though, the discussion overlooks their novel, quasi-heroic swaggering gait, and gaze fixed on far horizons), Apelles' thunderbolt-toting picture at Ephesos, and Pyrgoteles' engraved gems. The narratives, however, supplementing the traditional royal hunts and battles with weddings, processions, sacrifices, and appearances with gods, heroes, and personifications, showcased the king actually engaged in real (albeit cleverly edited) kingly action.

Among these genres, only the hunts and battles could adequately convey Alexander's unique charisma, heroism, intellect, and thus what this reviewer once termed his matchless "power to." Here the solo portrait's inherent bias towards "power over" (in Anglo-American parlance, now generally superseded along with "power to" by Alfred Gell's more inclusive but vaguer "agency", occasionally utilized in this booklet), could not seriously compete. Also - though von den Hoff omits to say so - the Greeks linked the two genres both ontologically and semantically. As Isokrates famously remarked in 338, "second only to the war that we and all mankind wage against the savagery of the beasts, the most necessary and righteous one is that which we and our fellow Greeks wage against the barbarians, who are by nature our foes and eternally plot against us" (Panathanaikos 163).

Yet since only victory in war could conclusively confer royal legitimacy (13), von den Hoff focuses upon these heroizing battle scenes, arranged in chronological order (19-77). As dated by him, these are: Lysippos's lost bronze Granikos group (Dion in Macedonia, 334/3 B.C.); two South Italian vase paintings (Apulia, ca. 330-320); the silver Porus decadrachms (Babylon, ca. 325); the so-called Alexander Sarcophagus (Sidon, ca. 312) and Alexander Mosaic (Pompeii, ca. 100, after a four-color painting of ca. 300); Etruscan reliefs and mid-Italic drinking cups (ca. 100); the exquisite little bronze equestrian Alexander from Herculaneum (before A.D. 79); the Chigi Tabula, a small marble relief bearing an even smaller shield depicting the battle of "Arbela" (i.e., Gaugamela), from a Roman villa in Latium (ca. A.D. 100); and finally the bronze coins and gold medallions of the Macedonian koinon showing the victorious spear-toting king riding down sundry wild beasts and barbarians (A.D. 222-235), per se placing them on the same level. In general, each discussion is informative, judicious, and to the point, though hobbled at times by the minimalist format and a lingering nostalgia for "certainty" (19; 60).

Thus, three of the five Apulian vases showing Alexander's victories are sidelined (21); contextualizing items such as the tetradrachm "Porus" issues and the now-lost Centauromachy fresco above the Alexander Mosaic omitted; and the genre's wider impact in antiquity and later (i.e., from Uccello onwards) excluded. And why revisit the old debates about whether the Granikos Monument showed its riders in action or not; if so, whether it included the Persian foe; and what its supposedly hyper-realistic portraits of the dead looked like versus the king's own (19)? Lysippos, the supreme exponent in bronze of male vigor, ēthos, and aretē (Alexander's in particular), could hardly have done them justice - and secured such ringing critical approval - by a static set of riders on parade; Roman writers clearly distinguish his turma ("squadron") from the sundry proelia ("battles") ascribed to others, his son Euthykrates included (Pliny, N.H. 34.66: fecit ... proelium equestre); and Greek art, though generally typecast and idealizing, had long used what Roland Barthes once brilliantly called a "reality effect" as its main persuasive tool. Lysippos's likely solution: a virtuoso array of galloping, bearded, typically hard-bitten Macedonian veterans led by their dashing, heroic, charismatic, and timelessly youthful king.

More interestingly (but unexplored here), all this was a fiction, since Alexander did not lead this death-or-glory charge, but only swept up its remnants in the ensuing general assault that against all odds won him the day. Velleius possibly spotted this sleight-of-hand, noting that Lysippos "inserted" or "interpolated" (interponeret) Alexander into the turma (1.11.4) - a telling remark oddly interpreted as making him merely primus inter pares (20). The implications of all this cannot be pursued here, but some of them should be obvious even so. And as to the king's appearance, the splendid little Herculaneum bronze, though twice ruled out (19; 54f), surely remains our best general guide despite its lack of a helmet, anachronistic diadem, and likely display along with a spear-wielding Amazon. For when Metellus Macedonicus took the turma to Rome in 146, it both caused a sensation and was by far the most conspicuous and celebrated of the city's Alexander memorabilia. Maybe it also showed him fighting sword in hand, since at the Granikos he broke his lance early on, and would have lost his head along with his helmet without Black Kleitos's timely intervention.

Finally, apropos the Alexander Mosaic (whose original I see no good reason to date after 323), the description of its implacably heroic, tight-lipped king and his close-knit entourage is excellent, but omits the other half of the equation: its antithetical portrait of Darius. Bearded, panicky, frantically reaching out to Alexander but mouthing mere barbarian babble, and fresh out of arrows, he is impotent and hapless. Standing high in his chariot atop a rigidly pyramidal organization thrown into chaos, he, his charioteer, and their careening car clearly echo contemporary Macedonian rape scenes such as the famous Hades and Persephone fresco at Vergina. As for his men, they are expendable, crushed like insects in his headlong flight, since "among barbarians, all are slaves but one" (Euripides, Helen 276). In toto, a stinging indictment of oriental absolutism.

Yet all in all, this booklet offers a fine introduction to Alexander's major "action portraits", especially for students and the interested public. I look forward to the promised in-depth follow-up studies (95), and urge a second edition in English sooner rather than later.