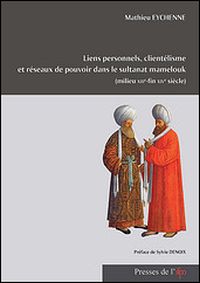 There is a growing interest in the study of social networks. Therefore, many research projects and collected volumes have been devoted to questions concerning the nature and types of socio-political and intellectual relationships. [1] They investigate socio-political life and intellectual lineages in terms of relationships between rulers, religious scholars and other social actors. The aim of Mathieu Eychenne's book is to examine the institutionalized interpersonal relationships between civil and politico-military elites. His book consists of three major parts: 1. Constitution et formes des liens personnels, 2. Pratiques sociales et clientélisme, and 3. Le dynamique des réseaux de pouvoir. In terms of microcosm, the author analyzes the socio-political life of the Mamluk community from the closest interpersonal relationships up to the broadest relational networks from mid thirteenth till the end of the fourteenth century. This was preceded by the analysis of some notions and concepts that are of significant importance for understanding the terminology used in the collected text-data in its own terms.

Far from being a monolithic community, the Mamluk sultanates were characterized by its intellectual, ethnic, religious and linguistic heterogeneity. In order to cope with eventual risks such diversity could involve, the Mamluks weaved intense networks with different social groups at different levels. In the first part of his book, Eychenne underscores in the first place the diversity of social relationships in Mamluk Egypt and Bilād al-Shām. The author builds up taxonomy for social networks that he examines at three levels. In the first level analysis, the author focuses on Mamluks' household as a space where civil and politico-military figures encounter one-another (patron-servant relationship). The second level of analysis is devoted to the study of social networks between the politico-military elite (Emirs) and the Sheikhs (jurists and sufis). Here, he illustrates the socio-political dimension of the Sheikh-Emir relationship especially concerning the legitimation of power. This category of relationship is of crucial importance for understanding how the highest public offices in judgeship and Khānqas were filled. In the third level analysis, the author pays much more attention to language skills such as Turkish and Persian (access to political networks), and Greek and Mongol (access to trade networks).

In the second part, the author focuses on patron-client relationships as a form of "Egocentric Network". The "nodes" of this Egocentric network are individuals (Sultan, Emirs, and judges) who, in turn, build up their own networks. Eychenne sketches interpersonal lineages between Sultan and Emir on the one hand, and between Sultan and Chief Judge on the other (patron-client relationship). He then outlines the relationship between Emir and Chief Judge who were in fierce contention for land grants and propriety. In this regard, he shows, for instance, how the Mamluk Sultan al-Ẓāhir Baybars sustained his Egocentric network with the Mamluk Emir Aydughdī al-ʿAzīzī and the Chief Judge (qāḍī l-quḍāt) ʿAbd al-Wahhāb Ibn Bint al-Aʿazz. Hereafter, he examines the impact of the patron-client network on the relationship between Aydughdī and Ibn Bint al-Aʿazz. The later relationship reflects the competition between social actors with different social statuses. Then, he analyzes how the impact of the clientelistic relationship between the Sultan and the Chief Judge affected implicitly the relationship between the later and his assistant judges from the ḥanafi, māliki and ḥanbali schools of law. While the patronage-based distribution of iqṭāʿ was the main character of the competition-oriented relationship between a Chief Judge and an Emir, the employment of assistant judges by a Shāfiʿi Chief Judge reinforced networks of dependency within the judgeship in Mamluk Egypt and Bilād al-Shām in thirteenth and fourteenth century. This microcosmic perspective characterizes the whole second part. As a case study, Eychenne deconstructs the genealogy of some familial groups, for instance the families of Banū Saʿīd al-Dawla and Ghibriyāl. Hereafter, the author looks briefly at the role of patronage networks in career progression for individuals. In this regard, the author points out that the administration of the Mamluks' owns private property and the widespread corruption became a stepping-stone for access to the highest government offices.

In the third part of his book, Eychenne investigates the dynamism and the mutual interference of relational networks from within. As a case study, the author focuses mainly on the third reign of Sultan al-Nāṣir Muḥammad Ibn Qalāwūn (r. 1310-1341) who had been dethroned and exiled twice before. Due to the fact that al-Nāṣir Muḥammad Ibn Qalāwūn was very eager to ensure his power, he carried out some reform that had a significant impact on the relational networks of his predecessor Sultan al-Muẓaffar Baybars (r. 1309-1310) and his financial administration officials. Here, the author concentrates on chronicles that describe both continuity and discontinuity between al-Muẓaffar Baybars' and al-Nāṣir Muḥammad Ibn Qalāwūn's strategies concerning the duties of financial officials and their powerful networks. To this end, Eychenne outlines briefly the evolution of some Sultanic financial posts that were created in order to protect the Sultan's wealth and to administrate his personal propriety, e. g. nāẓir al-khāṣṣ, nāẓir al-jaish and the wazīr. Here, the author addresses the question of how the concentration of power in one financial official, for instance the wazīr, affected the genesis of further powerful Egocentric networks during the last reign of al-Nāṣir Muḥammad Ibn Qalāwūn.

On the whole, the present book delivers a valuable analysis of some relational networks between Mamluks, the politico-military and the religious "elite" from mid thirteenth up till the end of fourteenth century. The focus on a well determined timeframe enables the author in a realistic way to deconstruct some personal relationships that help to understand the Syro-Egyptian social life during the thirteenth and fourteenth century. However, though the author devoted the preamble of this book to terminological problems related to the study of the political history during the Mamluk time, he uses some modern concepts such as état (state) without theoretical approaches or justification. This terminological point aside, with Liens personnels, clientelisme et réseaux de pouvoir dans le sultanat mamelouk (milieu XIIIe - fin XIVe siècle) Eychenne has made a laudable contribution to the study of the socio-political life from the perspective of a network analysis. Finally, it should be noted that Eychenne created a helpful appendix that consists of the following well documented data: secretaries of state employed by the Mamluk Emirs, Mamluk Emirs and their administrative officials, Khānqās in thirteenth and fourteenth century Cairo, Reconstructing the genealogy of Banū Saʿīd al-Dawla's family, family groups and matrimonial alliances among civil administrative officials, and the family of Ghibriyāl and his sons-in-law.