Ellen Kenney: Power and Patronage in Medieval Syria. The Architecture and Urban Works of Tankiz Al-Nāṣirī, Chicago: Chicago Studies on the Middle East 2009 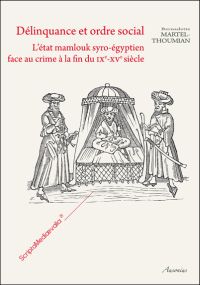 The last decade has witnessed important research that attempts to understand how medieval Islamic societies controlled and managed criminality. The study of the sociology of crime in medieval societies of the Islamicate world does not mean that it is possible to reconstruct - in the sense of historical anthropology - the criminal behaviour of certain ethnic, religious or sexual groups. This is due to the fact that the available text genres provide researchers of crime in pre-modern societies with a one-way historical perspective, namely the ways in which the political and juridical apparatus labelled it in criminal records. With regard to Egypt and Syria during the Mamluk-time (1250-1517), criminal registers and chronicles contain narratives of invaluable importance for the study of crime and its control in the Mamluk Sultanates. Against this background, Bernadette Martel-Thoumian is concerned in her book entitled "Délinquance et ordre social: L'état mamlouk syro-égyptien face au crime à la fin du IXe - XVe siècle" to study crime and the way in which the social order responded to it in late fifteenth century Egypt and Syria. The author analyzes an important literature of narrative chronicles that differ by nature from the fatāwā literature (normative discourses) concerning transgression and its control. The book under review consists of five chapters: 1. Délits et délinquance dans les sources de la fin du IXe - XVe siècle, 2. Institutions judiciaires et pouvoir politique, 3 Les délits, 4. Les châtiments and 5. Prévenir et lutter contre la criminalité.

In the first chapter, the author addresses substantial theoretical approaches that researchers of the sociology of crime in pre-modern times are facing, e.g. terminology, nature of data used, the non-representative character of report on crime rate, lack of a uniform and clear definition of crime in pre-modern societies. However, based on a semantic examination of different linguistic patterns used in the text-data under study the author builds up taxonomy for characterizing defenders. In this regard, she identifies three categories: criminal, transgressor and someone who abused his public office and treated someone unjustly (ẓālim). According to this taxonomy, crime seems to be labelled in the criminal records of late fifteenth century Egypt and Syria upon the following criteria: 1, Ethnic origin (Syrian, Egyptian, Maghrebian, Turks etc.), 2. Sex and age, 3. Legal status (judge, Emir etc.), religious affiliation (Muslim, Jew, Christian etc.) and 4. Socialization (inhabitant of a city or Bedouin etc.).

The second chapter is devoted to the institutional apparatus that was in charge of controlling and punishing criminal acts. Lacking historical evidences in the accompanying text-data concerning the dhimmi jurisdiction of, for instance, Jews and Christians, Martel-Thoumian focuses mainly on Muslim juridical apparatus and its function. Here, she presents the judge (qāḍī), chief judge (qāḍī l-quḍāt), army judge (qāḍī l-ʿaskar), and market supervisor (muḥtasib) as responsible for religious duties (first type of Muslim jurisdiction). These legal figures are juxtaposed with the sultan and his delegates, e.g. prefect of police (wālī l-shurṭa), chamberlain (ḥājib) and keeper of the royal writing-case (dawādār) as representative legal figures that were in charge of political duties (second type of jurisdiction). However, due to the political unrests and rebellions in late Mamluk time, both legal and criminal justice were not liable in the first place to the judge's freedom or Sharia inscriptions but rather to the Sultan's and his delegates' will and their common interest. The author lists several narratives that report on cases in which the Sultan punished judges because they delivered a verdict, which contradicted his interests or opinion. Unfortunately, narrative chronicles do not give sufficient evidences concerning the question whether the Sultan revised an already provided judgement or he merely punished the judge, e.g. release, arrest etc.

In the third chapter Martel-Thoumian identifies three configurations that appear in the collected text-data along with the corresponding categories of crime: violation of personal interest (stealing, robbery) and of bodily integrity (assault, murder, violation), disobedience vis-à-vis political authorities (rebellion etc.), and violation of religious inscriptions (blasphemy, prohibited desires etc.). According to al-Dhahabī's (d. 1348) scale of violent crimes where 70 serious misconducts are classified, stealing occupies the 23rd place, robbery the 24th position, and murder is rated the 2nd. Based on this scale, the author shows how chroniclers of late fifteenth century Egypt and Syria categorized and described situations that led to stealing, robbery, assault or murder. This chapter provides deep insight into the criminal landscape under the late Mamluk rulers. It shows that more attention was given to stealing and murder, while less emphasis was placed on the violation of religious inscriptions.

In chapter four, the author examines two different kinds of punishments: legal punishment (ḥudūd) and trials of corrections (taʿzīr). Martel-Thoumian divides the legal punishments most described in the collected text-data into six categories: financial punishment, timeless punishment, infamous punishment, mutilation, death penalty, and negotiated settlement. In this regard, it should be noted that these categories of punishments are not only typical for the Mamluk time but rather for the legal history of the Islamicate world at large. The narrative chronicles under study do support the opinion that the late Mamluk justice system was to a certain extent secular and under certain circumstances corrupt (fasād). Like in many pre-modern societies, legal punishment fulfilled not only juridical functions, but rather it had a moral and didactic dimension. This is the case of public executions that were conceptualized as crime prevention strategies, e. g. hanging (shanq), skinning (salkh), and bisection (tawṣīt).

In the last chapter of the book, Martel-Thoumian tackles the vexing question of how political authorities prevent crime before it happens; she describes some crime prevention strategies that political authorities achieved, in order to protect both personal interests and sustain security in the Sultanates. Therefore, the late Circassian Mamluk rulers regulated, for instance, the sale and the possession of weapons, the free movement of persons as well as the sale and the consumption of hashish and alcohol. Martel-Thoumian concludes that this was sometimes successful, but these measures of crime prevention have generally failed.

The book presents a concise study of transgression and its control in late fifteenth century Egypt and Syria. Martel-Thoumian's work is an important contribution to the study of the sociology of crime under the rule of late Circassians. It also sheds light on the current discussion under researchers of Mamluk legal history about the extent to which Sharia inscriptions and political domains siyāsa were intertwined. In sum, Martel-Thoumian's book provides a useful survey of a considerable number of narrative chronicles and criminal registers from the late Circassian Mamluk period on the one hand and of their social, political, economic and cultural context in the other. Hence, the book under review is of invaluable importance for researchers interested in the sociology of crime in Islamic medieval societies.